Steve Newman takes a trip that combines two of his favourite pastimes – cruising and walking – and discovers secret places on land and aboard Fred Olsen’s Black Watch.

Am I mad? The first morning of our cruise and I find myself at five to eight in the morning standing at the stern of Fred Olsen’s Black Watch huddled in my fleece against the North Sea chills.

This turned out to be my optional start to the day for the next 10 days as I joined passengers prepared to walk five times around the promenade deck to complete a mile before breakfast.

I had boarded the ship at Newcastle-upon-Tyne for a walking holiday cruise organised by Ramblers Worldwide Holidays. They are a travel company working with the Ramblers to offer walking holidays in 140 destinations in 16 countries with various levels of difficulty and exertion.

The cruise visited European coastal cities and towns combining an easy walking grade tour of the centres with an extension into the countryside around. I rather liked this idea as it involved getting straight off the ship and walking into the town to meet our guide. Not for us an hour-long coach trip followed by the long crocodile chasing a local guide holding aloft an umbrella and then the coach trip back.

We had had our first meeting in the library but soon changed the venue to the Morning Light Pub. With accents from Norfolk, Glasgow, Birmingham and Adelaide we are diverse bunch but our small group quickly gelled. 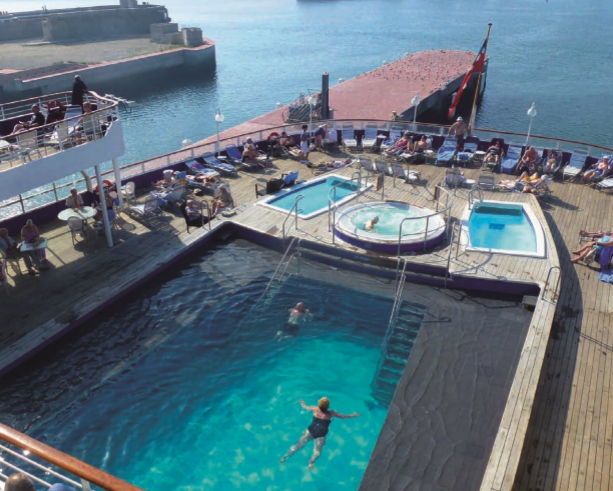 First port of call was La Coruna, Spain, and we met our guide in one of its leafy squares. The waterfront is dominated by beautiful white windowed balconies with a combination of sash and French windows 10 ten feet tall. A large section is perched above the colonnade that now houses shops, bars and cafes.

Walking through the narrow streets we entered the main square where what I assumed to be the cathedral turned out to be the town hall, surely one of the grandest in Europe. Climbing ever upwards we reached the park which houses the tomb of Sir John Moore who died here whilst evacuating the British troops in the Peninsula campaign. He may be virtually forgotten in his homeland but in Spain he is regarded as a hero and his tomb is an essential part of primary school history visits.

At this point, I discovered one of the beauty of the Ramblers’ system – there is no system. No-one was forced to stay with the group.  While most of the others headed two miles out of the city to visit the Roman Tower of Hercules –  a lighthouse which has been in continuous operation since possibly the 2nd century AD – I ambled slowly back to the comforts of  the ship.

The next morning saw us berthed in Vigo, famous for its public art, and we spent an enjoyable hour wandering around discovering statues and murals. A cup of coffee prepared us for the steep climb to the ancient citadel above the town which very few cruise ship parties visit – a shame as they would be rewarded with superb views of the estuary and port.

The best was yet to come, however, as our guide took us from the citadel into the labyrinth that is the old medieval city with its basket makers and potters. We finished up at the fish market and the Street of the Oysters where stallholders prepare the local oysters in the open air while locals drink sherry and put the problems of the world to rights throughout the day. The numbers for the 8:00 a.m. walk a mile were down as we arrived at Leixoes, the port for Oporto and the first of our two stops in Portugal; some of our group had discovered the late night disco on the ship.

An essential part of any visit to this city is to cross over the bridge to the southern bank and visit the Port wine warehouses and tasting the delights of this drink. As the rest of the ship’s passengers took the coach back to the ship, our group walked beneath the old walls beside bars serving white port and tonic with ice and lemon. I urge you to try it. Further on, marshland and sandy beaches being enjoyed by families brought us back to the ship where everyone was getting excited about our arrival in Lisbon next morning. 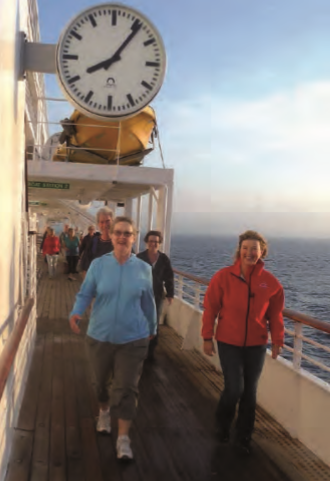 After collecting packed lunches, we meet our guide in the huge Palace Square a 20-minute walk from the ship. Our route took us through dark tunnels that pierce the old city walls into parts that are not normally seen by visitors. Even on the main routes we discovered hidden gems in unexpected places. You might not consider the public toilets beneath the cathedral worth a visit, and indeed the vast majority of visitors to the city don’t give them a second glance, but our guide insisted we went down the steps; there, beneath the trams and the tourists we found parts of the city still surviving from the medieval period with steps and doorways clearly visible.

This epitomises what these cruises are all about. Small compact groups that really get under the skin of a place, and comfortable easy walks that allow you to discover far more than you expect.

All too soon, it was time to leave Iberia behind and turn for home, and it was on the final leg of  the journey that I discovered another gem.

Honfleur lies at the mouth of the Seine and I can best describe it as a version of York surrounding a harbour. A 15-minute walk from the ship brought us to this little maritime city which somehow escaped the ravages of the Second World War. With its narrow paved streets and timber-framed house-fronts reflecting on the harbour front it’s not hard to see why it is one of the most visited towns in France. It has the oldest wooden church in France, unusual for having its bell tower 50 yards away from the main building. From there, we started the strenuous zigzag climb to the top of the hill that dominates the port. We finished our five mile circular route by walking along the beach watching the egrets feed and taking lunch in the park by the breakwater dedicated to artists such as Monet, who painted here.

Factfile
Black Watch began life as the Royal  Viking Star in 1972 and was acquired  by Fred Olsen Cruise Line in 1996.  A recent refurbishment has seen the addition of balcony terraces for 27 cabins on Lido Deck 7. The former self-service buffet area near the pool at the stern has been replaced by a premium restaurant, The Grill, serving steaks and lobster for  a £20 surcharge. Premium afternoon tea  is available for £6.50.

A keen champion of adventure and expedition eco-cruising. A former schoolteacher Steve also provides illustrated features to a variety of newspapers and magazines.