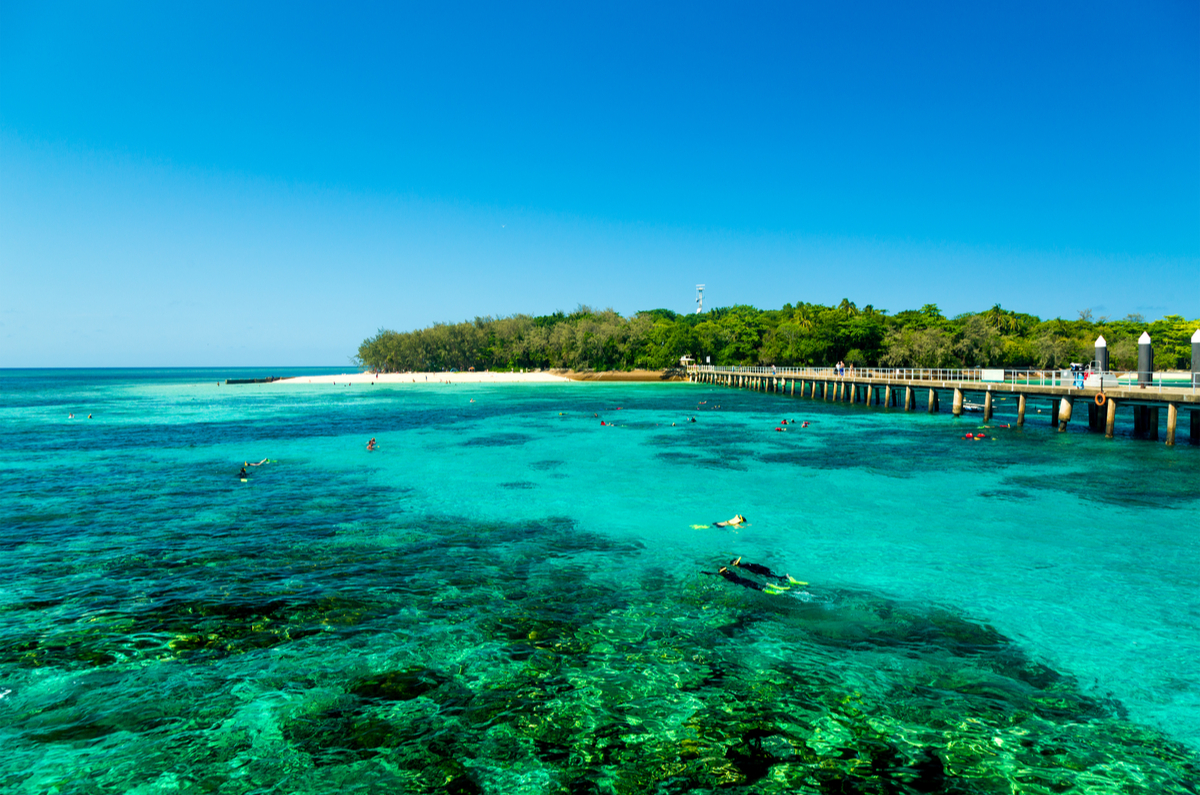 From natural wonders to man-made marvels, the jewel of Australia’s northeast coast has it all. Imagine a tropical city with just 150,000 permanent residents but multiple world-class natural attractions. We’re talking the Great Barrier Reef; the Daintree (one of the oldest and most ecologically important rainforests on the planet); and a pristine, towering hinterland –

From natural wonders to man-made marvels, the jewel of Australia’s northeast coast has it all.

Imagine a tropical city with just 150,000 permanent residents but multiple world-class natural attractions. We’re talking the Great Barrier Reef; the Daintree (one of the oldest and most ecologically important rainforests on the planet); and a pristine, towering hinterland – reached by cable car or mountain railway.

Not surprisingly, Cairns on Queensland’s Far North Coast is one of Australia’s most popular cruise destinations. Smaller ships can dock at the new Cairns Cruise Liner Terminal in the heart of town, while larger vessels will need to tender passengers in. Either way, prepare for an epic adventure.

09:00 Let’s assume that you don’t want to spend the day at the Great Barrier Reef (which 95 per cent of visitors have come to Cairns to see). Instead, why not walk off breakfast with a leisurely stroll along the Cairns Esplanade (a rival to Port Melbourne bayside as the finest in Australia)?

From the cruise terminal, you can follow the coast for a couple of miles, extending the distance with a boardwalk trail through the mangroves if you choose.

The esplanade is well supplied with cafes, restaurants and bars, as well as the saltwater Lagoon pool, a skate park, volleyball courts, outdoor gyms and a children’s playground, so all members of the family should find something to keep them happy.

11:00 Behind Cairns lies the Atherton Tablelands, and the journey between the two – through heritage-listed rainforest – is a highlight of any trip to Far North Queensland.

You’ll need to book in advance, but my advice would be to board the historic “Hogwarts-style” railway up the mountain to the quaint hilltop village of Kuranda.

The railway is an engineering marvel, winding through rugged gorges, dark tunnels and over skimpy bridges, which you enjoy from the beautifully timbered carriages.

12:00 Kuranda (its Aboriginal name means “the village in a rainforest”) is the closest Australia has to an Indian hill station, with temperatures much cooler than at sea level.

Many artists and artisans have settled here, which explains the proliferation of galleries, markets, curiosity shops and cafes (both tea and coffee are grown up here, so the locals take their hot beverages seriously).

Kuranda’s main tourist attractions are the Australian Butterfly Sanctuary, Birdworld, and Koala Gardens, where you’ll meet a descendant of Blinky Bill, star of many of Australia’s most cherished children’s books. As you can tell from that list, this is a place to relax and drop your pace to a gentle amble.

More curious – or braver – souls can go in search of crocodiles, gemstones and fossils, but you can spend a delightful afternoon here just chatting over coffee and cakes. 1600 If you took the train up to Kuranda, climb aboard the Skyrail Rainforest Cableway for the journey down (again, you’ll have to book). The 114 gondolas whisk you nearly five miles, skimming over a forest canopy that is older than anything you’ll see in the Amazon jungle.

The cableway has won multiple awards, and if you have time it’s worth getting off at one of the two stations en route to savour the breathtaking views of Barron Gorge.

18:00 Admittedly, here on the east coast of Australia you won’t see a golden sunset over the water. But settle down for an ice-cold beer or a happy-hour cocktail at one of the Esplanade’s many alfresco bars, and just imagine how wild it must have looked before Captain James Cook sailed his way up here in 1770 and put Far North Queensland on the map.

THE DAINTREE FOREST AND CAPE TRIBULATION

Just 50 miles north of Cairns you’ll come to Mossman, centre of the Daintree. This is not only Australia’s largest continuous rainforest but also the richest, in terms of biodiversity, anywhere on earth (before you book, try to watch FernGully: The Last Rainforest, an Australian animated film set in this amazing part of the world).

Drained by the Daintree River, the forest contains a third of Australia’s frog, reptile and marsupial species; 90 per cent of the continent’s bat and butterfly species and at least 12,000 varieties of insect.

If that doesn’t sound like the greatest attraction, just go there for the beauty, the serenity and the inescapable reminder that life existed on earth for millions of years before human beings arrived.

Those with a taste for adventure can hire a 4×4 and head even further north (around 25 miles) to Cape Tribulation. Should the name put you off, remember who christened it and in what circumstances.

On June 10, 1770, Captain Cook’s ship, Endeavour, ran aground on what is now Endeavour Reef. Thanks to consummate seamanship, Cook managed to repair his ship at what is now Cooktown, but not before the great navigator had named the cape to the north east: “Here began all our troubles,” he wrote in his journal.

Today Cape Tribulation is famed for its pristine beach, its fringing reef and its interpretative walks. The only tribulation you’ll experience now is when you leave.

One of the world’s most scenic drives, the 45-mile route from Cairns to Port Douglas threads its way between the rainforest and the Pacific Ocean.

Rivalled only by Broome on the Kimberley coast of Western Australia as the country’s premier sunshine resort, “Port” (as the locals call it) was founded in 1877 after gold was found on the Hodgkinson River. Nowadays the town depends on the tourist dollar – and works very hard to ensure that its high reputation is maintained.

As soon as you arrive, you’ll realise that you’re in the Australian equivalent of the Florida Keys (before Hurricane Irma). There are great restaurants and golf courses, Four Mile Beach remains one of the best places in the country to run, swim or stroll, and Flagstaff Hill offers an ocean vista equal to any in the southern hemisphere.

In short, there is just about everything you could want here.

Presumably you’ll arrive in Cairns too late for a pre-dawn balloon flight, and you may not be in the mood to try one of the favourite backpacker activities (a leap of faith from the world’s first purpose-built bungee-jumping tower, now 18 years old). So how about a round of golf? The Par 71 Paradise Palms Golf Club (at Palm Cove, 20 minutes north of Cairns) is one of Australia’s most scenic courses, sandwiched between mountains, rainforest, river and ocean.

Alternatively – and especially if you’ve never been able to brave the voyage to the Great Barrier Reef before – consider spending your day at Green Island.

This is within the Great Barrier Reef Marine Park but only 16 miles from Cairns in (usually) tranquil waters that take a fast catamaran around 45 minutes each way.

Here you can enjoy most of the reef experiences, including glass-bottomed boats, semi-submersible submarines, snorkelling and diving. Or you can simply while away your time having a massage or a swim with the kids in the resort pool.

08:00 If you’re going to the Great Barrier Reef – one of the world’s greatest (and most endangered) wonders – get everyone down to the crowded Cairns wharf early to catch your preferred excursion.

You’ll need to have booked online or through an agent, and it’s worth taking some trouble over this because there are scores of reefs and vessels to choose from, including catamarans, yachts and motor cruisers. It’s an all-day trip to the reef, so be realistic: are all your family members going to be happy at sea in a small boat?

As an alternative, several companies offer floating pontoons on the reef with netted perimeters and “stinger suits” (there are no dangerous sharks here, but the jellyfish can be annoying).

This is the safest option if anyone in your group is prone to seasickness. The pontoons offer relatively stable comfort while those who are feeling adventurous can dive in and glory at the coral and marine life.

After a truly unforgettable day you’ll probably return to Cairns around 4pm, just in time for a quick sundowner at one of the many harbourside bars before you reboard your tender or ship.

10:00 If you’re over the ocean thing and just want a relaxing day on land, you don’t need to venture out of Cairns. Just act like an Aussie and head for “the beach”.

Cairns can’t offer a safe natural beach (the danger comes from crocodiles rather than sharks) but it does have a man-made Lagoon, the finest free artificial beachside open-air swimming pool complex in Australia, complete with kids’ splash pools and playground.

The pool is part of Cairns’ famous Esplanade, and you could spend the whole day here with young children – especially if you borrow a bird book from the cruise-ship library and show them species they might never see again: pelicans, multi-coloured lorikeets and countless wading birds on the tidal mudflats.

14:00 Head out to Tjapukai Aboriginal Cultural Park, at the base of the Skyrail Rainforest Cableway, where the kids can play a didgeridoo, learn about “bush tucker”, enjoy traditional dances and stories – and generally be introduced to one of the oldest cultures on earth. The park is even more lively and atmospheric if you can visit at night.