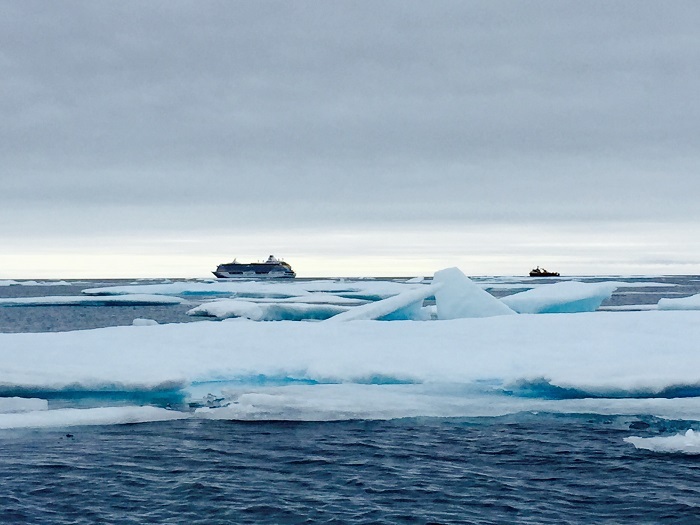 Crystal Cruises’ award-winning luxury ocean ship, Crystal Serenity, successfully entered the historic Northwest Passage and anchored in Ulukhaktok, Northwest Territories on August 27, and Cambridge Bay on August 29. The calls mark Crystal Serenity’s official arrival in the Northwest Passage – a region so remote that it was only first transited in 1906, and on only a handful of occasions since then. More than 1,000 guests on board, the largest amount of travellers to traverse the route, immersed themselves in the local culture and shared interactive moments with the Inuit residents. The ship is 14 days into a 32-night journey, which will conclude in New York City on September 16.

“The arrival to Ulukhaktok, the first call in the actual Northwest Passage, was truly a memorable affair,” said Crystal Serenity Master, Captain Birger J. Vorland. “Crystal Serenity was met by our escort ship, the RRS Ernest Shackleton, as well as a fleet of Zodiacs and our two helicopters. Everybody on board was outside to marvel at this truly magnificent and sunny day as we sailed in together to the anchorage.”

Crystal Serenity’s visit to Ulukhaktok was a first for everyone, as the residents of the village had never before welcomed a luxury cruise ship to their shores. Traditional dancers boarded the ship for a special performance representative of their culture, then showcased handcrafted goods at the area’s art centre. Crystal guests were brought ashore by zodiacs operated by the expedition team, Expedition Voyage Consultants.

Captain Vorland added, “One of the many highlights so far on this voyage was the warm reception the young dancers and singers from the small community of Ulukhaktok got when they performed on board during our overnight stay. Though distant in culture and background, there was in instant bonding between the guests of Crystal Serenity and the local people. On both sides there was a warm and welcoming tone rarely experienced anywhere else.”

In addition to the residents, guests were also greeted by locals of a wilder variety. A polar bear on floating ice was a true highlight for guests navigating the chilly waters by zodiac led by expert expedition guides. The encounter was part of Crystal’s “Unexpected Adventures,” which afford guests, safe and impromptu opportunities to see wildlife and other natural wonders along the journey.

Beyond the itinerary’s historic implications, the visit to the region is also the culmination of more than three years of planning and careful collaboration with the local communities of the Arctic. Following the ship’s first two stop in the Northwest Territories, she continued on through the Victoria Strait headed towards the Bellot Strait.

“From the get-go of this epic cruise through the fabled Northwest Passage, Crystal Serenity has been filled with great excitement,” said Captain Vorland. “Everyone here, whether crew or guest, is clearly aware of the significance of this voyage. As we have ventured north and east on our passage this excitement has only grown.”

Crystal Serenity is helmed by Captain Birger J. Vorland, and escorted by the RRS Ernest Shackleton, an ICE 05 classed icebreaker and is carrying expedition experts of its own, as well as environmental and adventure specialists from Expedition Voyage Consultants.

Due to the tremendous response from travellers regarding the 2016 Northwest Passage sailing, Crystal has announced it will sail the route again in 2017, available for booking now.