Today marked a historic moment in the world of cruising as HRH The Duchess of Cornwall christened Spirit of Discovery, Saga’s new boutique cruise ship, in a very special British naming ceremony at the Port of Dover.

The royal, who is the godmother of the new boutique cruise ship, was joined by 500 guests, along with the Saga management team, crew and employees, at the naming ceremony to officially welcome Spirit of Discovery into the Saga family. 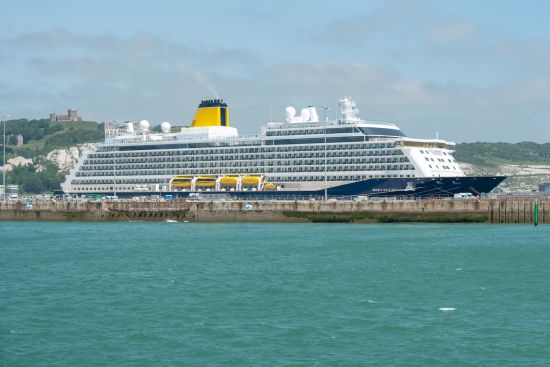 In an innovative new way of christening, the Duchess of Cornwall pressed a button to smash the Jeroboam of Hush Heath Spirit of Discovery sparkling wine against the side of the ship in celebration.

Following tradition, the Duchess wished the ship and crew good luck for the sailings ahead in a short but rousing speech, in which she also highlighted Saga’s charitable work, being the first national charity partner of The Silver Line, of which the Duchess is a patron:

“It is huge pleasure to be here today with Saga,” she said. “I know that Saga has a proud history of charitable endeavours. I name this ship Spirit of Discovery. May God bless her and all who sail on her.”

To celebrate Saga’s new ship, which has been created specifically for the British market, the Port of Dover was transformed into a traditional English garden party scene, with elaborate bunting, stunning foliage, trees, parasols and grass flown in from Yorkshire adorning the quayside.

This was washed down with Spirit of Discovery sparkling wine, specially blended by Kent vineyard Hush Heath for the ship, and Anno Kent Gin. Entertainment was provided by the Band of Her Majesty’s Royal Marines Collingwood and the Morrison Orpheus Choir.

Before the afternoon’s formal proceedings took place, The Duchess of Cornwall was given a tour of the ship, which has been designed to epitomise the best of British contemporary boutique hotel style and elegance.

Robin Shaw, CEO of Saga Travel, commented: “This is an amazingly proud moment for Saga. This ship is special because it is the only small new-build ship launched in the UK for decades. She is small, but perfectly formed. We are a boutique hotel at sea and will set the standard in luxury UK sailings.”

Also in attendance at the ceremony was Jools Holland, who gave a special performance to mark his exclusive partnership with the cruise line.

The ceremony also marked a historic moment in Dover as Spirit of Discovery was the first ship to be named in the coastal town for more than a decade at the port’s Dover Western Docks following a £250 million redevelopment.

Highlighting its commitment to Britain, Saga has registered Spirit of Discovery in the UK and will proudly display London as her port of registry on her stern. The ship will sail 999 passengers around the world, flying the Red Ensign, and her sister ship, Spirit of Adventure, will also fly the Red Ensign when she launches in August 2020.

The inaugural cruise of Spirit of Discovery, A British First, will depart from Dover on 10 July and sail around the British Isles.