A magnificent sailing through the heart of Europe

On APT’s ‘Magnificent Europe’ river cruise sailing along the Rhine, Main and Danube rivers, Jeannine Williamson is made to feel like royalty as she discovers fairytale castles and enjoys dinner with a princess.

Princess Heide von Hohenzollern opened the vast doors of Namedy Castle in the German town of Andernach and beckoned us inside. “Please look around, it is your home this evening and I welcome you,” she announced, before greeting us all individually.

Earlier concerns about possibly having to curtsy, and the correct form of address if she spoke to us, were quickly dispelled as the down-to-earth princess posed for photos before pointing the way to the opulent red-walled knight’s hall, where two statues of knights in armour stood guard by the fireplace.

I consider kissing one to see what happens when we’re called to dinner. Once seated, Princess Heide related the story of the 14th-century castle inherited in 1988 by her late husband Prince Godehard.

The couple, both passionate about music, set about restoring the tumbledown castle by the Rhine with the initial plan of selling it, but they fell in love with Namedy, moved in and began musical events, including concerts to showcase young musicians.

That night, in between courses, we listened to Chinese pianist Zihao Ye play technically challenging works by Ravel and Liszt. It was one of the highlights of APT’s epic and fittingly named 15-day ‘Magnificent Europe’ river cruise from Budapest to Amsterdam, taking in five countries and stopping at 15 cities, towns and villages.

What sets APT apart from many river cruise lines is that in addition to a choice of daily Freedom of Choice excursions, each sailing features special ‘signature experiences’ that are all included in the fare.

On our trip, the former included a private journey on Hungary’s Grand Empress steam train, a musical evening in Vienna featuring some members of the city’s famous boys’ choir, and of course, the banquet and piano recital at Namedy.

Sailing on AmaBella along three of Europe’s most famous and attractive rivers – the Rhine, Main and Danube – our voyage of discovery began in the Hungarian capital, where one side of the bank is dominated by the imposing Buda Castle, and on the opposite Pest side is the parliament building modelled on London’s Westminster Palace.

The joy of river cruising is that you just sit back and let the sights come to you, and the next day heralded Vienna. We then sailed through a scenic high spot, the UNESCO-listed Wachau Valley. 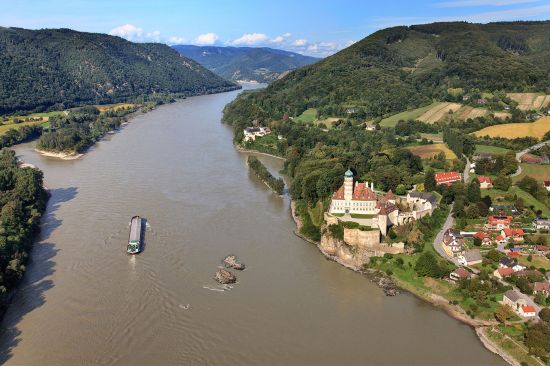 UNESCO-listed Wachau Valley, image courtesy of: Austrian National Tourist OfficeThis dramatic stretch of the Danube between the Austrian towns of Krems and Melk is lined with steep vine-clad slopes. At Melk, we visited the vast Benedictine abbey perched on an outcrop.

More akin to a palace than an abbey, the imperial corridor is lined with portraits of Austrian rulers and the cavernous library, with beautiful ceiling paintings, contains around 90,000 books.

By now we were heading towards Germany for the pretty town of Passau followed by medieval Regensburg, famous for its 12th century 16-arch stone bridge built by wealthy merchants, and the rather contrasting sight of what is claimed to be the world’s oldest sausage tavern in an unassuming building nearby.

Ensuing days included the beautifully preserved Bavarian town of Bamburg where I sipped my first glass of Rauchbier, a curious smoke flavoured beer that’s something of an acquired taste.

Another day and another country, and castles made way for windmills as we neared the end of our voyage in the Netherlands. Back on board, there was plenty to enjoy, too.

Carrying just 161 passengers, AmaBella is a lovely ship and one of the standout features is that more than half the cabins are Twin Balcony Suites, with both a French balcony and full walk-out veranda, which makes them particularly light and airy.

Each evening, with the setting sun reflecting on the water and a cocktail in hand, we’d swap tales of the riverbank with fellow passengers, a mix of Brits, Australians, Americans and other English-speaking nationalities.

Dinner was always eagerly anticipated as APT, with partner line AmaWaterways, is the only river cruise line that’s a member of the prestigious French gastronomic association La Confrérie de la Chaîne des Rôtisseurs, and AmaBella has several dining venues, which is unusual on a river cruise.

Some nights the main restaurant divided into two distinct halves, with an Italian menu served on one side and an international menu on the other.

There’s also a separate Chef’s Table restaurant featuring an amazing tasting menu, and all passengers get the opportunity to eat here at no extra cost. Complimentary free-flowing wine is served at all meals – you can even have sparkling wine at breakfast – so it’s no wonder mealtimes were so convivial. 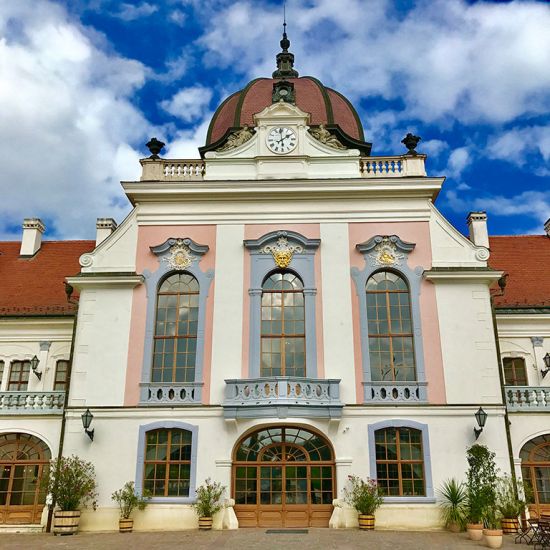 Afterwards, we’d listen to melodies played by the resident pianist or watch local entertainers who would hop on and off along the way. We never needed to worry about splashing out on a final nightcap as the fare also includes an open bar.

There was also daytime entertainment, including talks and, most notably, a fiery glass blowing demonstration by the informative and humorous Karl Ittig.

With the VIP home pick-up at the start and end of the holiday, the friendly and attentive staff who waited on us hand and foot, the river banks lined with fairytale castles and dinner with a princess, we really were made to feel like royalty on this cruise deep into the heart of Europe.