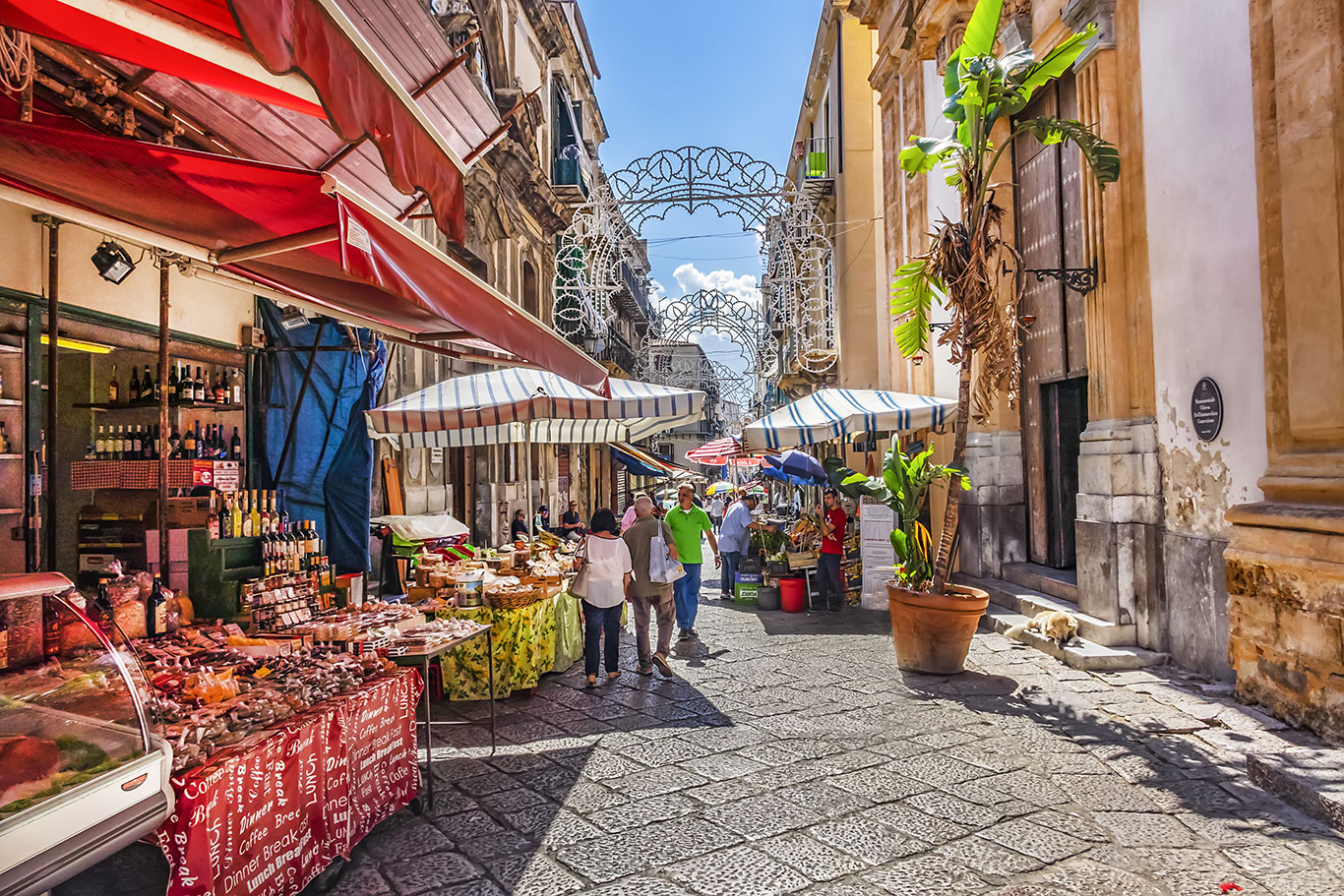 Food is a serious business in Italy and a great place to start your Italian culinary journey is Sicily, the country’s southernmost region, where myriad food festivals celebrate the local cuisine in a delightful display of colours, aromas and tastes. Just off the ‘toe’ of Italy, and closer to North Africa than to Rome, this Mediterranean crossroads has changed hands numerous times throughout history, each influx adding a new flavour to the melting pot.

The island’s capital, Palermo, is a popular port for many cruise lines, and is home to the street food festival, Panormvs. So, if you’d like to help the locals celebrate their culinary culture and sample traditional Sicilian food, read on for our guide to the best Sicily food festivals you can attend, and how to enjoy them from the comfort of your cruise ship.

Food festivals in Sicily are a little different from those here in the UK. While ours are generally a celebration of numerous cuisines coming together under one roof, in Italy they are usually dedicated to just one food item.

For example, in the hilltop village of Cesaro, in the northeast of the island, you can join the Festival of the Black Pig and Porcini Mushroom – an occasion dedicated to the area’s favourite four-trottered friend and the flavoursome fungus that complements it so well.

And that’s far from the only niche event you can attend. Elsewhere on the island you’ll find festivals dedicated to the prickly pear (the surprisingly succulent fruit of the cactus plant, colourfully known as bastardoni or ‘big bastards’), as well as the artichoke and the black bread of Castelvetrano.

Essentially, if you can eat it, there’s a festival for it. Take the couscous festival, held each September in the small town of San Vito Lo Capo, a 90-minute drive northwest from Palermo. This cheap staple of many North African countries is the focus of a week-long celebration that aims to promote cultural integration. Stalls offer various nations’ interpretations of the dish, while visitors can watch live cookery demonstrations and even have a go themselves, thanks to a pop-up food lab.

All this is part of a build-up to the main event: the Couscous World Championships. Ten teams will be competing this year, from Italy, Angola, Côte d’Ivoire, France, Israel, Morocco, Palestine, Senegal, the USA and Tunisia. Who will take home the prize? You can find out for yourself if you’re there from 20 September.

Elsewhere on the foodie calendar, there are two separate festivals that share a common thread. Pistachios from Bronte, a small town in the shadow of Mount Etna, are known as ‘green gold’ and said to be the finest in the world. These ridiculously tasty little nuts (technically seeds) are also the traditional garnish for a cannoli, the ricotta-filled tubular sweet that’s enjoyed throughout the island.

Naturally, the nut and the sweetmeat each have their own festival – though unfortunately for lovers of marketing synergy, they are held six months and 140 miles apart. Even so, there are plenty of reasons to visit Palermo in April to indulge in the diet-busting richness of the best cannolis, or to explore the Bronte pistachio festival at the end of September (you can also take a free guided tour of the town while the event is on).

You’ll have noticed that the majority of Sicily’s food and wine festivals occur in September and October. Happily, that’s also one of the best times to visit the island, once the heat of midsummer has given way to balmy warmth. But this is a land so in love with food that you can arrive at any time from April to December and someone, somewhere, will be celebrating their local delicacy.

The one problem you might have is reaching the festivals in the first place, given that only a couple of the island’s ports – Palermo and Messina – can accommodate the larger cruise ships. This will also allow you to enjoy your Med cruise without the crowds. The two cities are situated well apart, giving you access to the northwest and northeast of the island respectively, but many festivals take place in smaller towns and villages some distance inland, so you’ll need a little time, some patience, and perhaps even a hire car.

On the plus side, Palermo itself holds a number of festivals – and even if nothing specific is happening when you visit, it’s a fabulous foodie destination in itself (as revealed in a particularly mouthwatering episode of the BBC TV series Rick Stein’s Long Weekends).

Sail on a smaller ship with one of the boutique lines, such as Windstar or Ponant, and the whole island will be your oyster, with easy access to some of the lesser-known ports, such as Trapani and Catania, that cluster round the coastline. You’ll still need a transfer to certain festivals, but you’ll get there and back much sooner, leaving you more time to raise your glass with a hearty salute, pick up a knife and fork, and tuck in.