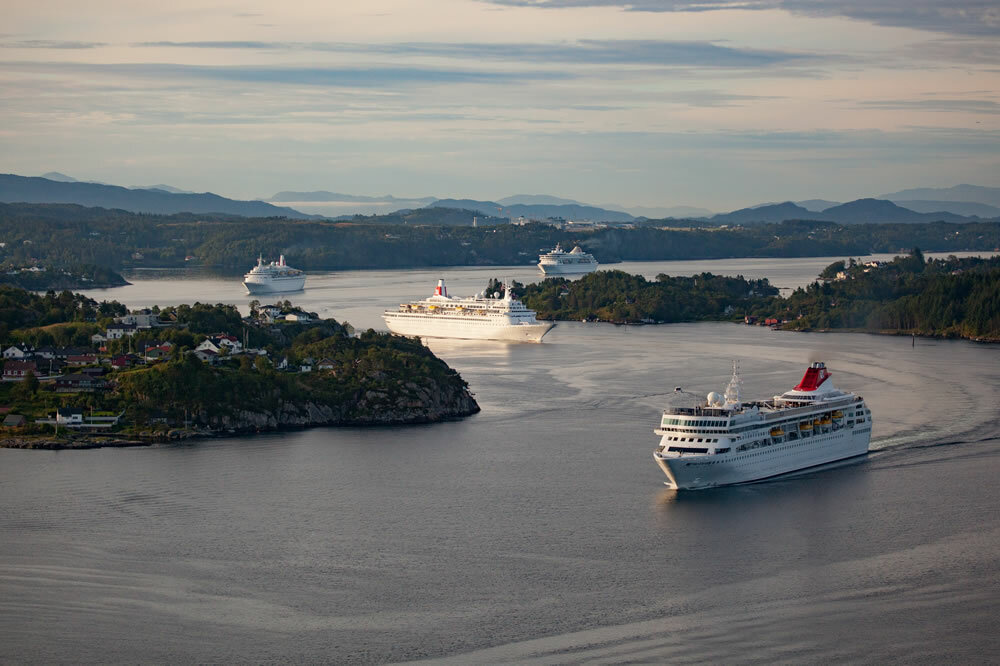 Cruise news / Fred. Olsen fleet unite for the first time ever in Bergen

Fred. Olsen fleet unite for the first time ever in Bergen

The Fred. Olsen Cruise Lines fleet of Balmoral, Braemar, Boudicca and Black Watch all converged in Bergen, Norway, last week for the first time in history. Around 4,000 passengers on board the four vessels witnessed the ships enter Bergen harbour in formation at just before 8.00 am. Flagship Balmoral was berthed at Bontelabo Pier, sister

The Fred. Olsen Cruise Lines fleet of Balmoral, Braemar, Boudicca and Black Watch all converged in Bergen, Norway, last week for the first time in history.

Around 4,000 passengers on board the four vessels witnessed the ships enter Bergen harbour in formation at just before 8.00 am. Flagship Balmoral was berthed at Bontelabo Pier, sister ships Boudicca and Black Watch at Skolten Pier and Braemar at Festningskaien Pier, nearest to the city centre.

This historic ‘4 Bs in Bergen’ event included a number of festivities on the day. A Norwegian-themed marching band performed on the quayside and guests were welcomed to Bergen by locals in national costume. An inter-ship ‘Tug of War’ took place at Festningskaien Pier. A city Treasure Hunt was also offered where guests were tasked with finding six historical locations.

Guests also had the chance to visit all four ships as they were berthed along the quayside‎, and were invited to enjoy the different range of activities taking place across the fleet.

A range of specially-themed ‘4 Bs in Bergen’ shore excursions were offered to guests, including a walking tour, a helicopter tour to see all four ships from above, and a Mount Fløyen funicular tour‎.

Mike Rodwell, Managing Director for Fred. Olsen Cruise Lines, said “Today has been a very special day for Fred. Olsen Cruise Lines. We were delighted to be joined by Fred. Olsen and Fred. Olsen Jnr, our Chairman, at the Port of Bergen today, and it was with great pride that the fifth and sixth generations of our company looked upon their cruise fleet, joined together for the very first time. It is testament to our incredible crews that we were able to lay on such an enjoyable array of festivities and activities for our guests to participate in throughout the day, and there has been a very special atmosphere in the beautiful city of Bergen today. We are committed to the city of Bergen – known as the ‘Gateway to the Fjords’ – on our Norwegian cruise itineraries. The Olsen association with Bergen can be traced way back to the 19th Century and we would like to thank the Port and the city of Bergen for making us so very welcome today.”

Captain Victor Stoica, Master of Balmoral, said “Today was a memorable event in the history of Fred. Olsen Cruise Lines and, along with all crew here on board Balmoral, I feel honoured to have been part of it. There has been an electric atmosphere on board since we sailed from Southampton and our guests have enjoyed every single second of this incredible experience! I am very proud of the efforts from each and every crew-member and office personnel, who have worked tirelessly in creating an event that will be talked about for years to come.”

The four ships departed from Bergen in convoy at 6pm, and exited the harbour in a ‘diamond’ formation, led by a fire tug boat ceremoniously spraying its water cannons.

Scenic Islands of the British Isles