Jane McDonald Pays Tribute to “Amazing Fans” on The One Show

Speaking on BBC’s The One Show this evening (29 October 2019), BAFTA-winning TV star and cruise legend Jane McDonald paid tribute to her incredible fans, who have shown her such loyalty over the years.

Delving into her new autobiography, Riding the Waves: My Story, which charts her incredible life and career, Jane McDonald discussed the first chapter which is named after the song, The Hand That Leads Me, which she wrote for her mum, who Jane has often credited for inspiring her singing career and who sadly passed away last year.

Speaking candidly to presenters Matt Baker and Alex Scott, Jane recounted the concert she performed just two weeks after her mother’s death and how it was during her performance that she realised just “how much she loved her fans”.

“That night took on a whole different, marvellous thing that happened. All my fans stood up and sang it with me and that’s when I knew just how much love I had for my fans and how they helped me get through the most difficult time,” she said.

“So now when I sing that song it’s about them. For them to remember their loved ones. And now everybody lights up torches and it’s just so emotional to see people reflecting about their loss. When you lose somebody, you join a club.” 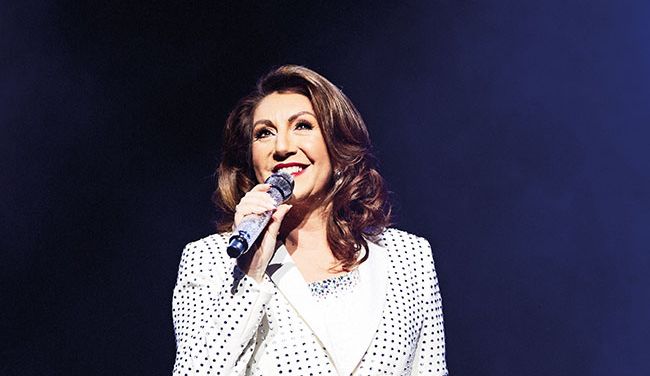 During the interview, Jane also reminisced fondly about her home, Wakefield, and the beginning of her singing career working in local clubs before hitting the high seas as a singing sensation on cruise ships.

Jane credited her time working in the clubs, which she humorously referred to as “the Yorkshire RADA” for having taught her the craft, but on a more serious note remarked how it was while there that she learnt “how to work the audience, how to do crowd pleasers and how to stay alive”.

Following this, Jane went to go work on the big cruise lines in 1997 and just a year later had her big break when she appeared on BBC’s documentary The Cruise, thus commencing her long reign as the ‘queen of cruise’.

As guest presenter Jones noted, it is this that has made her so loved by her fans, but responding to this with her typical charm and Yorkshire humility, she replied, “I wouldn’t go that far love”.

Jane McDonald’s autobiography, available to pre-order now, details her incredible journey and talks for the first time about how she survived early success.

Next year, Jane McDonald is chartering her own cruise ship and proudly remarked how she is “taking all of my fans with me”. The seven-night Sail Away with Jane McDonald cruise takes place aboard Royal Caribbean’s Anthem of the Seas.

Setting sail from Southampton on 20 September 2020, Jane joked how guests “can take as many shoes as you want”.