Jane McDonald: “I’m In Much Calmer Waters Now. I’ve Learnt How to Swim”

Jane McDonald appeared on This Morning today (30 October 2019) to discuss her new autobiography, Riding the Waves: My Story.

For the first time, the BAFTA-winning TV star and cruise legend has opened up about her amazing but often turbulent career.

Just been filming for my new book #RidingTheWaves and have got my hands on an early copy! I am so proud and can’t wait for you all to read it.

Speaking to presenters Holly Willoughby and Phillip Schofield, Jane candidly shared her struggles as a child suffering from crippling stage fright, which prevented her from performing in public until her mum took her in hand.

“She blackmailed me basically,” Jane joked. “I was painfully shy. I did suffer from terrible stage fright, but then one day I just got over it. I said to myself ‘this is what you love, this is what you’re passionate about, so do it’.” 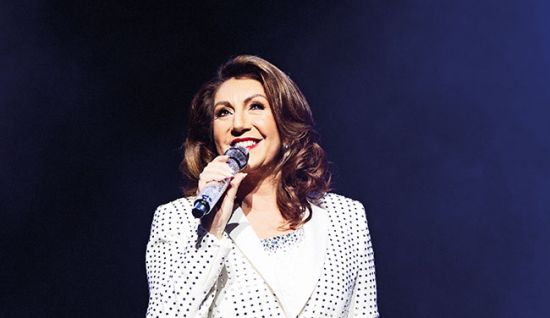 Jane’s path to success certainly wasn’t plain sailing, beginning her career in clubs in her hometown of Wakefield, and the book details the “trials and tribulations” she faced, although she does not regret this time of her life at all.

Working tirelessly, Jane ended up losing her voice, but this proved to be a blessing in disguise, as she ended up going to work on cruise ships as a performer and landing her big break on the BBC documentary, The Cruise.

From earlier in my wonderful trip (I was working, honest!) pic.twitter.com/A3piLp3KQP

It was while working on cruise ships that Jane McDonald met her first husband, Henrik, and the book shares intimate details of their marriage, their working partnership (he was her manager) and eventual divorce.

She commented: “I still have no regrets about Henrik. The industry is fickle and hard. Henrik tried his best and that’s all I can do…We were just talking business, business, business. We lost the romance which sometimes happens and he let me go.”

Remarking jokingly on the number of ship analogies in the book, Jane noted how it “hasn’t always been plain sailing, but she’s in “much calmer waters now”, and she “doesn’t feel seasick anymore”. She commented: “The second bite of the cherry is the sweeter now.”

Appearing on BBC’s The One Show yesterday (29 October 2019), Jane also discussed the importance of her fans in getting her through the hardest times, particularly the death of her mum who sadly passed away last year, and how much she owes them.

As a way of giving back to them, Jane is inviting her fans on a cruise with her next year as she is chartering a cruise ship for the first time.

The Sail Away with Jane McDonald cruise is taking place next September and Jane promises “It’s going to be a blast”.

Come on a cruise with me! I’m taking over the incredible Royal Caribbean, Anthem of the Seas® for a whole week in September 2020 and you're invited! We’ll be setting sail on Sunday 20th September 2020 from Southampton and visiting Cherbourg, Vigo & Lisbon. https://t.co/WmqyXyJFj8 pic.twitter.com/jARJ0JSWWG

Jane McDonald’s autobiography, Riding the Waves: My Story, be available to buy tomorrow (31 October 2019) and she will be discussing it further tomorrow on ITV’s hit daytime show Loose Women, on which she was a panellist for 10 years.

Make sure to tune in!