The jewel of America’s Pacific northwest, Seattle, has more than enough attractions to keep cruisers coming back time and time again From Jimi Hendrix to Kurt Cobain to Boeing and Bill Gates, they’ve all called Seattle home. The capital of the US northwest has creativity and enterprise rising like steam from the sidewalk – and the coffee

The jewel of America’s Pacific northwest, Seattle, has more than enough attractions to keep cruisers coming back time and time again

From Jimi Hendrix to Kurt Cobain to Boeing and Bill Gates, they’ve all called Seattle home. The capital of the US northwest has creativity and enterprise rising like steam from the sidewalk – and the coffee bars are hipster heaven.

One per cent of all construction costs in this fast-growing city go to public art, and you can see more than 400 works as you ramble about, including the 48ft Hammering Man outside the Seattle Art Museum and the quirky Parking Squid on Alaskan Way, with tentacles that make a useful bicycle rack.

Seattle’s setting is spectacular too, overlooking picturesque Puget Sound and the Olympic Mountains, the backdrop for so many film and TV productions. You’ll recognise locations from Sleepless in Seattle (remember Tom Hanks’s home by Lake Union?), An Officer and A Gentleman and, more recently, 50 Shades and Grey’s Anatomy.

No wonder the city is such a draw for tourists. And it has never been easier to get to, with Norwegian Air’s flights from London (just £180 each way) and Thomas Cook’s from Manchester offering stiff competition to BA and Virgin. You can also fly Aer Lingus from Dublin, with the great advantage that you clear US immigration before you take off.

For cruise fans, Seattle has a special resonance, and more than one million passengers passed through the Port of Seattle in 2017, the vast majority departing for the pristine waters and incredible wildlife of Alaska.

Holland America Line even has its headquarters here, with three of its ships home-porting for summer sailings to America’s northernmost state. MS Zaandam offers the 14-night Great Alaskan Explorer cruise, with calls including Ketchikan, Juneau, Anchorage and Victoria, as well as scenic cruising in Hubbard Glacier and Tracy Arm, while MS Eurodam and MS Amsterdam offer seven-night round-trips.

With Alaska in your sights it’s tempting to fly in to the city’s Sea-Tac airport and rush to embarkation – but then you’d be missing out on the laid-back vibe in this lip-smacking, music- loving, young and liberal city. If you can spare 24 hours to explore, we’ve put together three contrasting itineraries to help you make the most of your day. And if you can make time to do them all, you’ll still only scratch the surface of this jewel of a city.

Seattle is a compact city, with hilly streets running down to the waterfront. Head for Pike Place to find the West Coast’s most famous food market. If you hear shouting it’ll be the fishmongers who turn their trade into street theatre, throwing and catching huge fish with the skill of baseball stars. You’ll find dozens of great places to stop for brunch among the cafes and restaurants overlooking Elliott Bay, and the only chainstore here is Starbucks at number 1912 – which we’ll forgive because this is the company’s first ever shop, grinding beans since 1971. 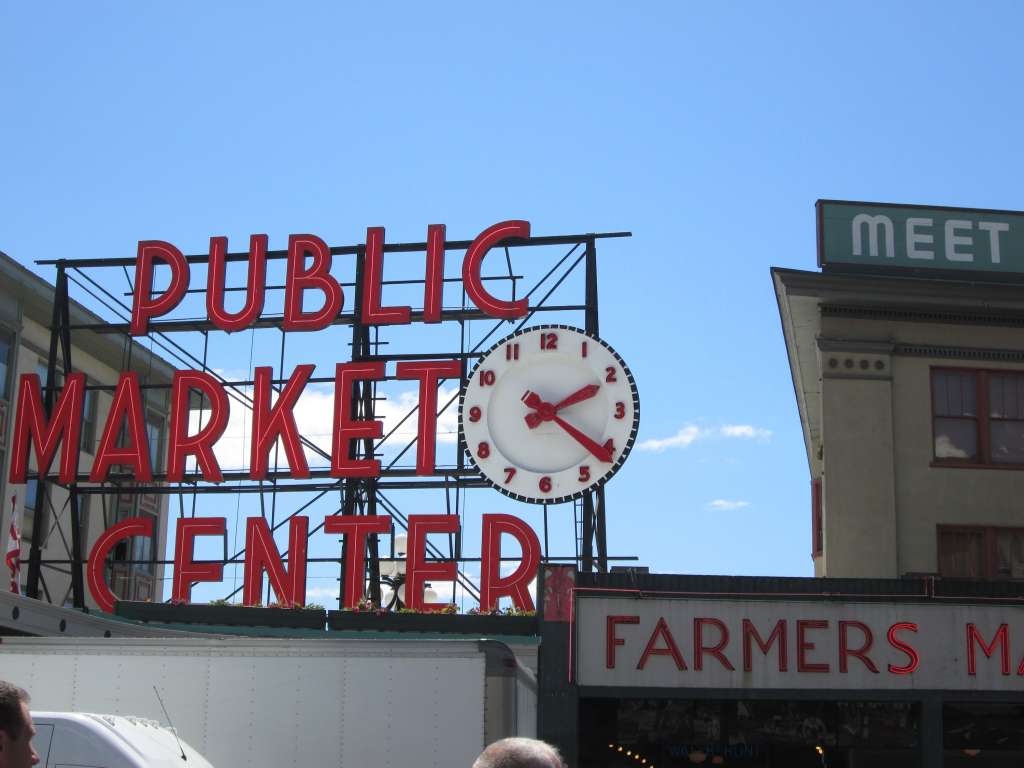 From Pike Place you can walk up two blocks and jump on the monorail to the Seattle Centre, a 74-acre park. First stop here is the Museum of Pop Culture (MoPOP), a giant curve of glistening steel by superstar architect Frank Gehry that celebrates the city’s music heritage. Wild Blue Angel: Hendrix Abroad is an exhibition focussing on the guitarist’s brief but spectacular years of stardom, while Imagination Unlimited is a gentler attraction showcasing the work of Muppets creator Jim Henson.

Next door is the Chihuly Garden with its giant glass creations by sculptor Dale Chihuly, while the neighbouring Pacific Science Center is a must for techno-geeks. Then cross 5th Avenue North to the eco-friendly, uber-cool Bill and Melinda Gates Foundation Visitor Center and see why, and how, the couple have donated more than $35 million to 11,500 worthy causes.

Seattle’s most famous landmark, the Space Needle, is right next to MoPOP, and its viewing platform offers fabulous 360-degree views of the city, sea and mountains. If funds allow, splash out on dinner – the restaurant is superb, and as the pianist plays you can almost hear the voice of Seattle’s celebrated fictional therapist and bon viveur.

Jump on board the Bainbridge Island Washington Ferry from Seattle’s Pier 52 for a 35-minute sailing to enjoy a romantic, calm day away from the bright lights of the city. With Puget Sound and the Olympic Mountains to the west, and Mount Rainier looming to the southeast, Bainbridge Island is picture-perfect (if you’re a fan of Grey’s Anatomy you’ll recognise the place immediately).

Walk from the ferry terminal into the small town of Winslow, where the classy new Bainbridge Museum of Art (BIMA) takes pride of place – you can’t miss the funky building at the top of the road. It’s free to enter, with displays of work by local artists and sculptors.

There is a thriving wine industry in Washington State, and at the Island Tasting Room Gallery Café, just along from the BIMA, you can work your way through the list. The Tasting Room has an arrangement with nearby restaurant Café Nola, which is in the prettiest spot opposite a white weather-boarded church, so buy your wine and take it over to wash down a delicious meal of Alaskan salmon and the local Mora ice cream (try orange cream, blackberry or lavender).

Then work off those calories with a visit to Bloedel Reserve, a horticultural paradise with 12 self-contained gardens including a bird marsh teeming with wildlife, a Japanese garden and enticing woodland trails.

The Bainbridge Island Ferry costs $8.20 from Pier 52 at 801 Alaskan Way, with hourly sailings. Bloedel Reserve is open all year round; admission costs $17 for adults and $6 for children (under-fours go free).

Where The Wild Things Are

Seattle is called the Emerald City because there is so much natural beauty on its doorstep. Less than two hours’ drive brings you to majestic Mount Rainier, a 14,000ft peak set in a landscape of unspoiled loveliness.

The air is pure and the hiking paths meander past Alpine meadows, natural springs and beaver dams, while the lower slopes are clothed by wildflowers such as white avalanche lilies, purple shooting stars and orange Indian paintbrushes. Feel the cool mist of Christine Falls and marvel at shimmering lakes before crossing the Ohanapecosh River to the Grove of Patriarchs, where mighty 1,000-year-old Douglas firs reach 300ft and spike the sky.

Look out for deer, elk, black bears and Cascade red foxes – though on such a tight time schedule it’s worth exploring Mount Rainier National Park with a guide. Tour company Evergreen Escapes provides a luxury bus for up to 10 people accompanied by a naturalist who knows the mountain intimately – it’s the perfect way to enjoy the scenery without stressing over directions. There’s a homemade picnic lunch included in the price, and the company will pick you up from your hotel or cruise terminal and return you at the end of the day, so you can soak up all that scenery without worrying that you’ll miss the boat. The full day tour costs $229 plus tax; see evergreenescapes.com

Lesley Bellew was a guest of the Port of Seattle, visit portseattle.org