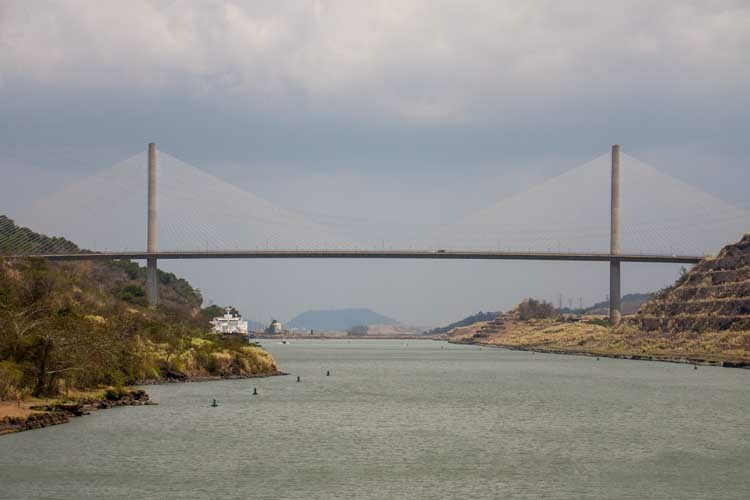 If you’re going to undertake a memorable transit of the Panama Canal, you might as well do it on board one of the biggest ships that can squeeze through its six locks. At 90,228 gross tons and measuring 964.5 ft long and 105.6 ft wide, Celebrity Infinity fills that bill – for now at least;

If you’re going to undertake a memorable transit of the Panama Canal, you might as well do it on board one of the biggest ships that can squeeze through its six locks.

At 90,228 gross tons and measuring 964.5 ft long and 105.6 ft wide, Celebrity Infinity fills that bill – for now at least; all will change when the new Canal locks open, but that’s another story.

The westbound cruise that I joined left from Miami, Florida and ended at San Diego, California – although I jumped ship to fly home from Puntarenas in Costa Rica. Together with two bus-loads of passengers I got my first look at the Canal from on land, thanks to an excursion that took us to the new and old Gatun locks.

A swanky visitor centre has opened months before the expanded waterway is ready to accommodate its first ships. There’s an air-conditioned cinema showing an informative film, a reasonably-priced souvenir shop, and an extensive bar and restaurant.

The real attractions are the viewing areas; from one we saw Holland America Lines’ Zuiderdam at anchor in Gatun Lake. The ship was not making a full transit of the canal; it had entered from Colon earlier in the morning and its passengers were being tendered ashore for excursions. They would rejoin the ship back in port later in the day.

It was a steamy, misty dawn next morning as the Infinity left the port of Colon and approached the canal entrance from Limon Bay. Three Panama pilots came on board to supervise the navigation and my fellow passengers crowded the helipad at the bow and climbed to the uppermost decks to be in prime viewing position for our entry into the first of the three Gatun locks.

A low-tech, neon-lit arrow indicated which of the two parallel channels we should take. Two men in a tiny rowing boat made their way from the lock side delivering ropes tied to steel cables.

It all seemed disarmingly primitive until those cables were attached to gleaming electric locomotives costing £1.2 million each. Their task was not to pull us through – ships use their own power – but to make sure the ship’s sides did not scrape against the concrete walls. A crowd of spectators taking their own turn to watch were treated to a levitation trick worthy of any David Blaine illusion; 22 million gallons of water flooded into the lock in less than 10 minutes without the need for pumps or any mechanical aid, lifting Infinity and a container ship in the second channel alongside, as if by magic. After taking more than an hour to be raised through the locks, we emerged into Gatun Lake and for the next few hours threaded our way between luxuriant islands and rainforest national parks. The wide open spaces are most un-canal-like and yet the lake, containing some of the 10 feet of rain which falls each year, is what makes the Panama Canal possible.

By now the humid 94-degree heat was proving too much for many of the passengers, who retreated from the outer decks to the air-conditioned comfort inside Infinity. I remained on deck, transfixed by the passing scenery and some of the curiosities.

On one bank, just past a viaduct carrying trains from the trans-Panama Railway over the water, we could see the infamous El Ranacer prison, where ex-president Manuel Noriega is held after being convicted of drug trafficking and murder.

We entered the Culebra Cut, a gorge carved 100 years ago by dynamite and steam shovels through the mountains of the continental divide. I was awestruck by the gigantic feat of civil engineering and we felt like we were back in a “proper” canal once more. One that has just been widened to 715 feet and has the graceful Centennial Bridge soaring overhead.

Then it was time to start our descent; first through the single San Miguel Lock, then through the pair at Miraflores. On our starboard side, clouds of dust rose from the construction work that will create a whole new channel and three more bigger, wider locks. The sun was beginning to set as, passing under the Pan-American Highway carried by the steel arch of the Bridge of the Americas, Infinity emerged into the Pacific ocean. About 11 hours had passed since we entered the canal – a day which will remain in my memory for ever. On the way to Colon, we had an interesting day in the Colombian port of Cartagena, whose old walled city is a UNESCO World Heritage Site. I never expected the museum filled with reproductions of the torture implements used during the Spanish Inquisition.

Among the flower-decorated wooden balconies in the main street, and across from the cathedral is a house where Sir Francis Drake once lived. Behind its elegantly-restored façade is a building site, and a Google search later revealed that the four-floored home is for sale. Asking price, $4.8 million, if you’re interested. Now who, in Colombia, could possibly afford a figure like that?

On the ship, I was dining each evening in the splendid Blu Restaurant, reserved for suite guests, where the levels of service and the quality of the food were second to none, It was also a peaceful choice for breakfast, in much the same way as the Grills restaurants on Cunard.

Highlight of the ship for me, though, was the SS America speciality restaurant, which – with its Art Deco interior containing a number of original pieces from the Blue Riband-holding liner – was like stepping back in time. The food felt like it was from another era as well; I had the creamiest of lobster bisques and a melt-in-the-mouth Dover Sole Veronique.

Just one problem, there was only one tune playing on the restaurant’s iPad the entire evening and the staff were unable to do anything about it. Repeat, repeat, repeat: with the music it was annoying, but I would give the Panama Canal another go any time.

48 miles The length of the canal from Limon Bay to the Bay of Panama
14,000 Number of vessels passing through the canal each year.
15 August 1914 The canal was opened to shipping with the passage of SS Ancon.
4 September 2010 Bulk carrier Fortune Plan became the one-millionth ship to transit the canal.
200 million cubic metres: The volume of rock and soil removed in the construction. Much of it was used to construct breakwaters at either end.
201 feet Clearance under The Bridge of the Americas that will still be a limiting factor on the size of ships passing through the expanded canal.
1,200 feet The maximum length of ship able to use the new locks currently being built. Width increases to 160 feet.
£263,000 The approximate toll paid by a cruise ship carrying 2,500 passengers or fully-laden container ship.