Cruise news / Put Me Back Together: The stretching of Silversea’s Silver Spirit

Put Me Back Together: The stretching of Silversea’s Silver Spirit

Just two short miles down the coast from the beautiful Sicilian city of Palermo, in Italy, an engineering miracle was being performed by the workers of the Fincantieri shipyard.

They were about to stretch a ship. But this isn’t stretching in the way you would stretch your favourite pair of tights or a child would stretch a rubber toy. This is stretching by means of cutting a ship in half, inserting a new section and welding the whole thing back together again. All in just one month’s time.

The ship in question, Silver Spirit, belongs to luxury cruise line Silversea, and the goal was to take this 32,667-tonne and 642ft ship and increase her essential measurements to a larger 35,851-tonnes and 691ft. Or as Silversea put it: ‘adding 49 extra feet of comfort’. All for the princely sum of $70m.

Stretching a ship is a rare, but not unheard of, operation ­– in fact, the Silver Spirit represents the 29th ship that Fincantieri has stretched over the course of their 230-year history. A rate of miracle-performing that can have you nominated for sainthood around these parts.

The ship was delivered into Fincantieri the Monday before our arrival – already stripped of all its fixtures and fittings – where the shipyard team proceeded to mark up all the pipes and cables which needed to be cut.

Over the course of the week the 500-strong team slowly cut through the hull of the ship and its ten decks leaving just the final cut to be made. Meaning most of the hard work was done before the world’s media descended on the Sicilian capital on Saturday looking to witness something truly special. 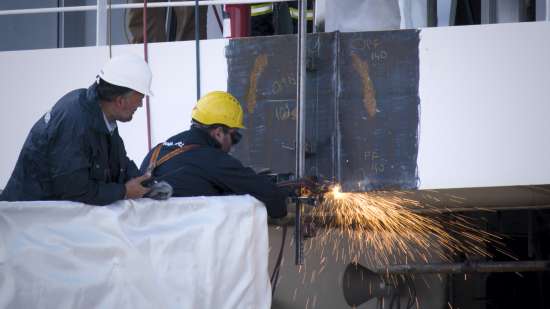 That moment came after just a few minutes when the ship’s hull gave out one final groan as it was cut in two, followed immediately by a round of applause and the popping of champagne corks.

The deed was done and Silver Spirit spent the rest of the afternoon slowly drifting apart exposing its hollowed out interior and creating a gap which allowed you to see the multiple mountains that surround Palermo in the distance.

All there was to do now was to wait until the next day for the 49ft, 1,089-tonne premade midsection to be inserted into place.

Sunday brought with it typically balmy weather and strong winds. Conditions which, according to Andrea Zito, Silversea’s senior vice-president of technical operations, would have caused all manner of trouble in the past when this operation was completed with all the component parts floating. But now, in the 21st century, it can be achieved in dry dock with the help of all manner of clever machines.

So, it was with bated breath we watched the midsection slowly wheeled into place, gradually inching its way towards the hollowed-out carcass of Silver Spirit before, after roughly 15 minutes, it was settled into place.

The miracle had been performed; Silver Spirit was back from the dead and in one piece again.

Silver Spirit will spend the next 24 days at the shipyard before she begins her first sailing since rebirth between Civitavecchia (Rome) and Barcelona on May 6.

In that time, the Fincantieri team will begin the arduous task of welding the ship back together, re-attaching pipes and cables, and giving the entire ship a design overhaul.

But what was the point of it all? Well, along with adding the extra 49 feet, Silversea have used the time in dry dock to make some far-reaching changes to Silver Spirit – bringing it closer in line to the line’s most recent ship, Silver Muse. 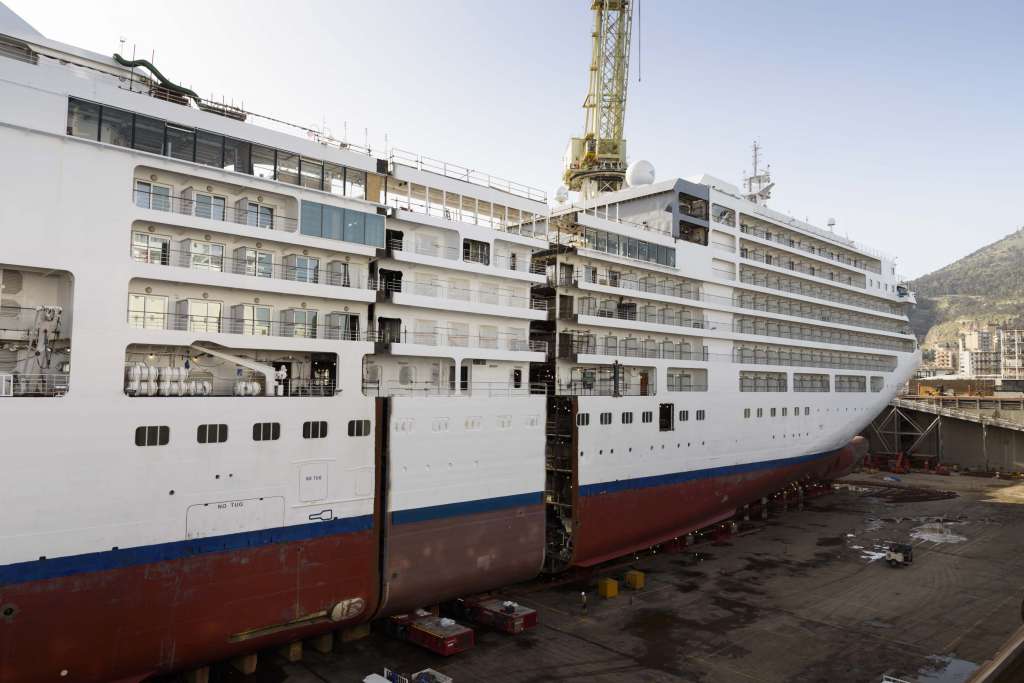 Space is one thing Silver Spirit passengers are going to have a lot more of with the square footage of the ship increasing from 26,447 to 37,972. This, of course, brings with it more passengers (up from 540 to 608) and 34 new suites to enjoy.

Plus, as a happy coincidence of the ship cutting going straight through the top-deck pool, that will be considerably bigger as well!

Dining options have been extended – increasing from six to eight – with more space available to passengers in the ever-popular La Terrazza Italian restaurant.

There’s a brand-new Arts Café for guests to appreciate some fine art along with a damn fine cup of coffee. And, in another move to bring the ship in line with Silver Muse, the Zagara Spa will be installed on Silver Spirit offering a wide range of treatments.

Barbara Muckermann, chief marketing officer for the Silversea Group, explained: “This is bringing one of our most popular ships to the future.

“We have Whisper and Shadow which are our classical ships and now we have Silver Muse, our flagship in operation, and Silver Moon its sister ship coming up.

“And in the middle, you had the Spirit. She was a little bit torn between the two worlds, so by doing this operation we are pushing her to be a sister ship to Muse and Moon and we are retrofitting all the innovations of the Muse to the Spirit.”

As for what this means for Silversea going forward against its rivals in the luxury market, Muckermann was bullish: “I think the whole industry understands that there is a new Silversea. Silversea is very dynamic: from the new itineraries we are launching to the advertising campaigns with (photographer) Steve McCurry. We are really kicking it right now.

“It’s a continuous innovation and a continuous push to get our message to luxury customers to show them what we are all about.”