If trains could dream, they’d all want to be the Rocky Mountaineer.

This is one of the world’s most scenic rail journeys, travelling from the pioneer towns of western Canada across precipitous peaks to the ports of Vancouver and Seattle.

The lines of carriages snake along beside cascading rivers, through dense forests and into spiralling tunnels cut into rock.

Combined with a road tour taking in some of the beautiful turquoise lakes in the region, a trip on the Rocky Mountaineer enhances even the splendour of a cruise to Alaska.

There are four routes to choose from – all via Vancouver.

The most popular is the two-day First Passage to the West, which retraces the historic Canadian Pacific Railway for 600 miles from the coast to the Rockies, reaching the highest point of the network and crossing the continental divide before the final stretch downhill into Banff.

Or you can opt for Journey Through the Clouds, which follows the same route out of Vancouver before turning northeast to Jasper for views of Mount Robson, the highest peak in the range, and the spectacular Pyramid Falls. 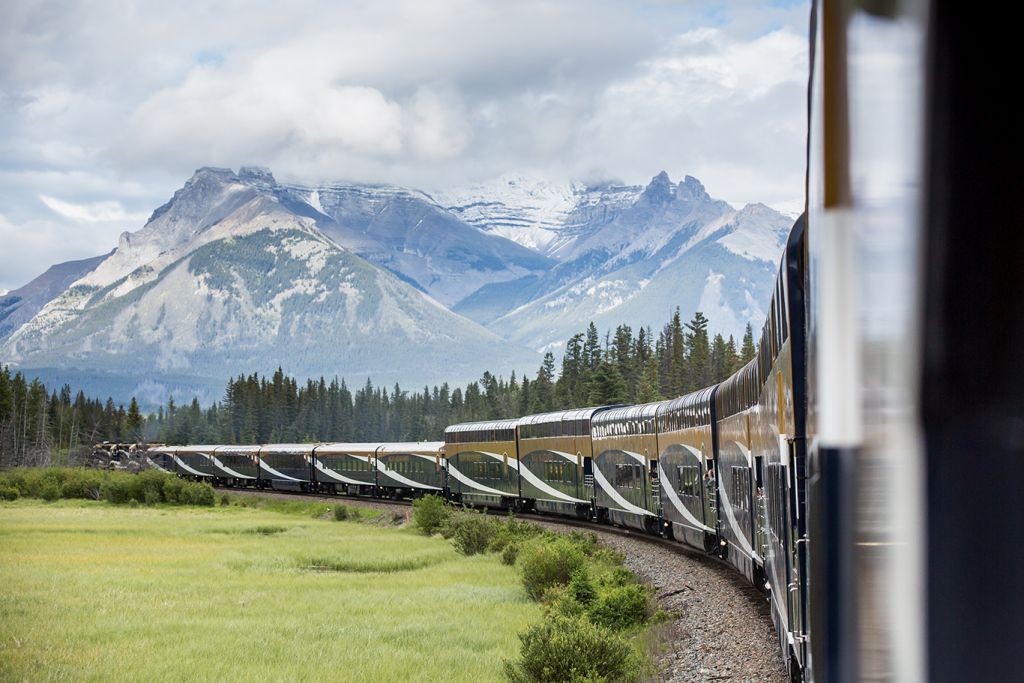 Alternatively there’s the Rainforest to Gold Rush route, which runs from Vancouver north through Whistler and Quesnel to Jasper – a three-day ride through 720 miles of rarely visited wilderness.

Finally, the Coastal Passage follows the Pacific shoreline across the US/ Canadian border between Seattle and Vancouver before joining one of the other routes.

Whichever itinerary you choose, you won’t be disappointed, especially if you choose a two-deck GoldLeaf carriage with its domed observation deck and separate dining area underneath.

As well as the stunning landscapes you can view from your comfortable electrically-operated chair, there’s always the opportunity to walk down to the observation platform at the end of the carriage to feel the wind in your hair, hear the clanging of the level-crossing bells as they fade into the distance, and take dozens of photos with an unobstructed view.

At breakfast and lunch, half the passengers are called down to the dining tables and given a choice of delicious courses, while the remainder are offered snacks and drinks while they wait their turn.

In SilverLeaf service, which is hardly less luxurious, you are served at your chair as you enjoy the view from large picture windows.

Travelling on the Rocky Mountaineer means following in the footsteps of pioneers, prospectors and fur-trappers. No wonder the place names are so evocative: Hell’s Gate, Skuzzy Creek, Avalanche Alley, Jaws of Death Gorge, Kicking Horse River. 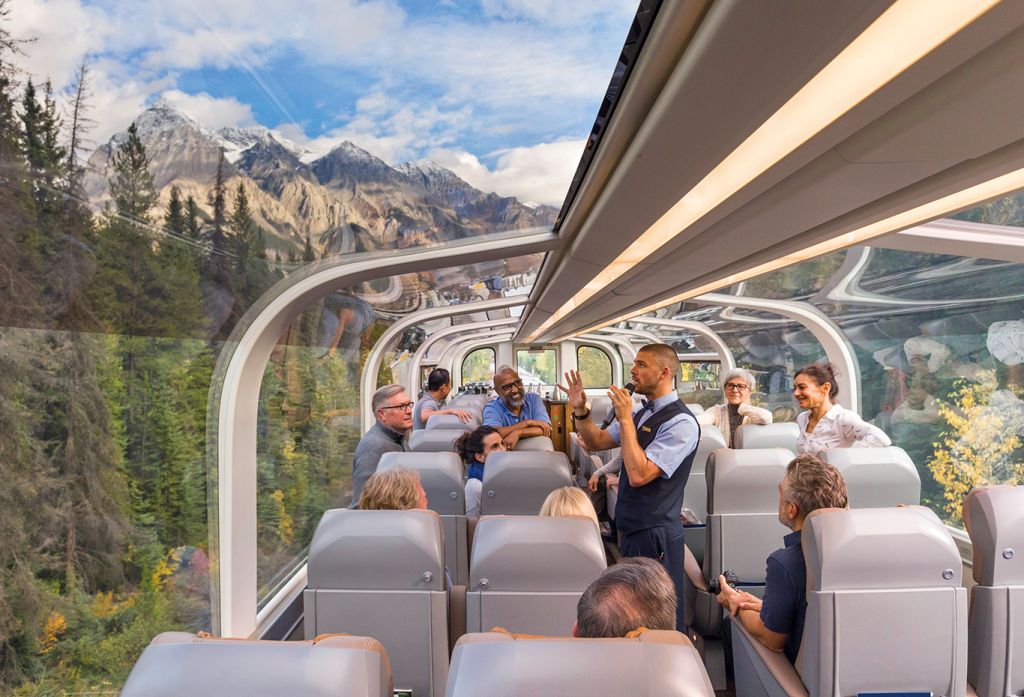 And you can’t take your eyes off the landscape, not just because it’s spectacular – although it is – but because at any moment you might see bears, moose and bald eagles.

The train crew give an alert if they spot something of interest first (as they usually do), and they also tell you the history of the area, such as the ‘great train robbery’ of May 1906, which netted a grand total of fifteen dollars and a handful of liver pills.

Not surprisingly, Bill Miner and his gang of master- criminals were caught shortly afterwards.

Then there were the Overlanders, a group of pioneers who crossed the Rockies on the way to the Cariboo gold fields in the mid-1800s. This party of 32 men, a pregnant woman and her three children took a month to navigate the Yellowhead Pass. A day after reaching Fort Kamloops, the valiant Mrs Catherine Schubert gave birth to her fourth child.

The size of the Rocky Mountaineer trains, both in height and length, is awe-inspiring, especially when seen at their own depot in Vancouver.

And even though this giant must give way to mile-long freight trains, it also has the freedom to slow to a crawl at picturesque points en route, unlike normal rail services. 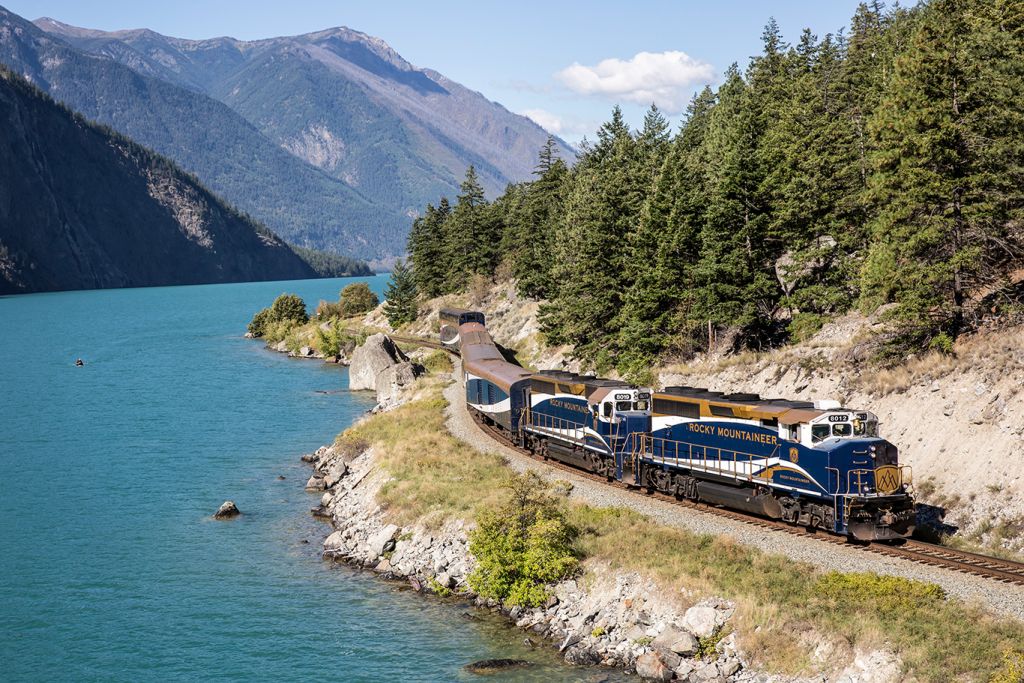 After a feast of scenery and food, the journey doesn’t have to end in Jasper or Banff. Rocky Mountaineer offers its own add-on packages, such as a motor-boat cruise across tranquil Lake Minnewanka, a raft trip on the Bow River, or a guided hike.

And new for the 2019 season, running from mid-April to mid-October, are excursions such as heli-hiking tours, self-drive packages and visits to Nordic spas.

If you stay in Banff, you can relax in a thermal pool or dare yourself to step out on the glass- floored Glacier Skywalk. Between the town and Jasper, 171 miles away, you have the option to visit Lakes Louise, Peyto and Maligne, or there’s the Columbia Icefield, where you can trundle on to a glacier in an oversized Tonka truck.

Whether you begin or end a cruise with the Rocky Mountaineer, you’ll soon understand why the service has carried more than two million passengers over five million miles since 1990.

With such amazing scenery and attentive crew, it’s on track to take millions more…

Coastal Passage Classic: 5 hotel nights with 3 days aboard the Rocky Mountaineer from Seattle to Banff via Vancouver and Kamloops (Coastal Passage plus First Passage to the West), from £1,908pp (SilverLeaf)

First Passage to the West Excursion: 4 hotel nights with 2 days aboard the Rocky Mountaineer from Vancouver to Banff plus a road tour to Calgary and a sightseeing helicopter flight, from £1,449pp (SilverLeaf)

Journey through the Clouds Outdoor Adventures: 10 hotel nights with 2 days aboard the Rocky Mountaineer from Vancouver to Jasper plus guided hiking, canoeing, rafting, helicopter flight, ice fields tour and Zodiac trip or cycling tour of Vancouver, from £3,109pp (SilverLeaf)

From Fort Lauderdale to Southampton (London)

From Vancouver to Seattle