The Asia of your imagination is still there to be discovered. Picture yourself cruising great green rivers, past timeless villages where oxen plough the fields and the banks are lined with golden temples. Then change the scene to neon-lit megacities, with sky-high bars and bustling night markets packed with treasures.

China and Vietnam, Malaysia and Japan offer all these experiences and many more, including an ever-changing palette of brilliant flavours, often at their best in simple street food.

Asia cruises offer so more variety and there is plethora to choose from. Whether you experience this amazing part of the world by ocean or river cruise, you can be sure of holiday memories you’ll cherish forever on an Asia cruise.

Sailing through the emerald-green waters of Halong Bay on Vietnam’s northeast coast is a mesmerising experience. This UNESCO World Heritage Site is dotted with 2,000 limestone islands, often shrouded in mist and creating an ethereal sight.

Foodies will love the sizzling savoury pancakes known as banh xeo, which take their name from the sound of rice-flour batter pouring into a hot frying pan. Filled with pork, prawns or vegetables, these can be found in every food market.

7-night ‘Riches of the Mekong’ cruise aboard AmaDara, from Kampong Cham to Ho Chi Minh City, departing 13 January 2020, from £1,936, amawaterways.co.uk

Usually paired with Vietnam on Lower Mekong river cruises, Cambodia’s resort town of Siem Reap is the gateway to Angkor, the 12th-century temple complex that includes the incredible beehive towers of Angkor Wat.

Other highlights include Tonle Sap – southeast Asia’s largest freshwater lake – a unique biosphere that shrinks by three quarters in the dry season but submerges trees when it floods. You’ll also be dazzled by Cambodian capital Phnom Penh’s opulent Royal Palace, where a solid gold Buddha is studded with 9,500 diamonds.

Cambodia is famed for its rice dishes – look out for mild Khmer red curry, and fish amok with creamy ginger and lemongrass sauce.

10-night ‘From the Angkor Temples to the Mekong Delta’ cruise aboard Indochine II, from Siem Reap to Ho Chi Minh City, departing 11 January 2020, from £3,077, croisieurope.co.uk

Rich in cultural heritage and with world-class shopping, Hong Kong combines thousands of years of Chinese tradition with the legacy of 150 years of British colonial rule.

The best way to see it is from 1,308ft Victoria Peak (the tram ride, with a gradient of more than 25 degrees, is an experience in itself). Take a trip on the tub-shaped Star Ferries, which have plied the waters between Hong Kong Island and Kowloon since 1874, and you’ll be rewarded with fantastic views of Victoria Harbour, particularly at night. For another inimitable experience, hop aboard a rattling ‘ding ding’ tram.

Food will play a major part in your trip, too, and if you like dim sum you can enjoy it for breakfast, lunch and dinner. A ‘hot pot’, where you cook your own food in stock, is also a fun way to eat with friends and family.

7-night ‘Far East from Hong Kong’ cruise aboard Spectrum of the Seas, round trip from Hong Kong, departing 8 January 2020, from £1,357 including flights, iglucruise.com

This is an immense destination in every sense. Shanghai’s mile-long Bund waterfront boasts dizzying skyscrapers illuminated after dark, and in Beijing the 100-acre Tiananmen Square leads to the Forbidden City, where emperors once ruled their far-flung lands.

Yangtze river-cruise highlights include the 150-mile Three Gorges region, with its breathtaking vistas of cloud-topped mountains and sheer cliffs, and its astonishing dam, the world’s largest engineering project.

Land stays at inland Xian showcase the Terracotta Warriors, the life-sized model army that lay buried for 2,000 years until discovered in 1974. Incredibly, each of the 7,000 sculpted soldiers has a unique face.

No visit here would be complete without trying a traditional Peking duck dinner (chopsticks optional), where chefs painstakingly carve each bird into 120 precise pieces. You’ll find modern Chinese cuisine a surprise and a delight in Beijing and Shanghai.

13-night ‘Imperial Jewels of China’ river cruise aboard Viking Emerald, from Shanghai to Beijing via Wuhan, Three Gorges and Xian, departing 31 October 2020, from £3,795 including flights, vikingcruises.co.uk

In the Land of the Rising Sun, the super-modern tech of cities such as Tokyo and Kyoto rubs shoulders with centuries-old traditions. From shoguns and samurai to emperors and graceful geishas, Japanese history can be explored through shrines and temples.

Inuyama, visited from Nagoya, is famous for its beautiful wooden castle, one of the oldest and best preserved in Japan, while Tokyo’s Meiji shrine, which celebrates its 100th anniversary in 2020, is a tranquil forested retreat in the heart of the city.

Natural wonders, such as the world-famous cherry blossom season, can be experienced on themed sailings, while shore excursions offer the chance to experience a Japanese tea ceremony – the ancient ritual of taking green tea with guests, sitting on tatami mats made from straw.

18-night ‘Japan Grand Voyage’ aboard Queen Elizabeth, round trip from Tokyo via Kobe, Kagoshima and Nagasaki, departing 7 October 2020, from £3,628 including flights, cruise1st.co.uk

14-night ‘Authentic Japan’ cruise aboard Boudicca, from Tokyo to Hong Kong via Kobe, Hiroshima and Nagasaki, departing 13 January 2021, from £3,349 including flights, fredolsencruises.com

Vibrant Kuala Lumpur – KL to its friends – has been shaped by European colonists along with Chinese and Indian migrants. It’s a city where ancient temples and mosques jostle for space with some of the world’s tallest buildings.

Situated at the confluence of the Gombak and Klang rivers, Malaysia’s capital offers peace and tranquility in its 230-acre Lake Gardens, or the adrenaline rush of white-water rafting.

Across the South China Sea on the island of Borneo lies East Malaysia, where the port of Bintulu is the gateway to Similajau National Park. Here, turtles lay eggs on 25 miles of pristine beaches, and giant saltwater crocodiles – the world’s largest – bask in the sun.

Langkawi, off Malaysia’s west coast, is another idyllic port of call, where you might spot the majestic sea eagles that gave the island its name. For a taste of the region, watch out for nasi kerabu – you can’t miss it, it’s made with eye-popping electric blue rice, coloured with dye from the petals of the butterfly pea flower.

15-night ‘Enchanting Far East from Langkawi’ cruise aboard Marella Discovery, round trip from Langkawi via Kuala Lumpur, Singapore and Bangkok, departing 26 February 2020, from £1,736 including flights, planetcruise.com

It may be one of the smallest nations in the Far East, but the island of Singapore packs a punch as one of the world’s wealthiest destinations.

Singapore began to flourish in 1819 when Sir Stamford Raffles established it as a British trading post, and nowadays the former colonial district is surrounded by towering high-rises and shopping malls. Other fascinating historic areas include Little India, Chinatown and the Arab Quarter.

The city’s spotless appearance is down to a ban on chewing gum, along with laws against littering, graffiti and spitting. Enjoy world-class shopping on Orchard Road, then relax in the nearby Botanic Gardens, Singapore’s first UNESCO site.

And who could resist a Singapore Sling, the famous pink cocktail first mixed in 1915 at the historic Long Bar of the Raffles Hotel? Newly refurbished this year, Raffles is the perfect pitstop in this steamy city.

16-night ‘Lands of Enlightenment’ cruise aboard Crystal Symphony, from Mumbai to Singapore, departing 21 November 2020, from £4,508, crystalcruises.com 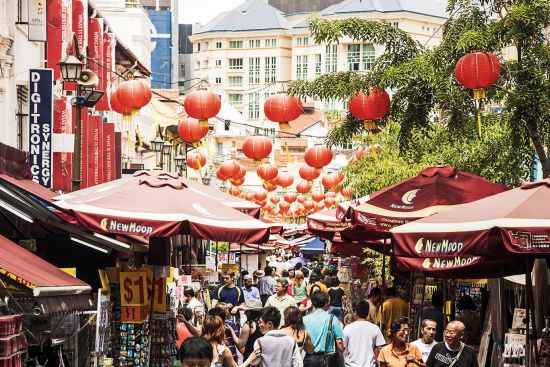 Tiny and landlocked, with a population of less than seven million, Laos is an enticingly off-the-beaten-track choice for a river cruise. Sailings on the Mekong take in the buzzing capital, Vientiane, and the UNESCO-listed French colonial city of Luang Prabang, where you can rise at dawn to join in the daily alms-giving to saffron-robed monks.

At Pak Ou caves, tucked into sheer limestone cliffs, you can marvel at thousands of Buddha statues set into the rocks, then cool off at the cascading Kuang Si waterfalls.

When thoughts turn to food, try larb, a tangy mix of marinated meat or fish, and green papaya salad. Laotians also love their sticky rice – but note that it’s traditional here to eat it with your fingers.

14-night ‘The Mekong: From Laos to China’ river cruise aboard Sabaidee Pandaw, from Jinghong to Vientiane, departing 5 September 2020, from £6,059, pandaw.com

Flowing north-south for 1,350 miles, the Ayeyarwady (Irrawaddy) is the longest river in the former Burma, and it’s the nation’s cultural and economic lifeblood. Cruises include overnight stays in the atmospheric cities of Yangon, formerly Rangoon, and Mandalay, immortalised in the famous poem by Rudyard Kipling.

Yangon’s fabulous jewel-encrusted Shwedagon pagoda is an unforgettable landmark, and Mandalay’s wooden Shwenandaw monastery is renowned for its intricate carvings.

As your ship glides along the river, you’ll pass hundreds of glittering golden temples and pagodas, especially on the plain of Bagan, where balloon rides offer breathtaking bucket-list views. More adventurous travellers can explore the out-of-the-way Chindwin, a tributary of the Ayeyarwady, which flows towards the Indian border.

Myanmar’s cuisine is a blend of influences from neighbouring countries including Thailand, China and India. Try a salad of lahpet, or fermented tea leaves – nicer than it sounds!