Queen of all the world’s coasts – that’s how Chilean poet Pablo Neruda described Valparaiso. And as you explore the city’s 42 hills, forming a natural amphitheatre round the ocean, you’ll be sure to agree. Factor in a bohemian, Berlin-meets-San Francisco vibe and it’s easy to see why Chile’s colourful Pacific port has proved such a magnet for philosophers, painters and poets over the years.

Founded in 1536 by the Spanish conquistadors, Valpo (as locals call it) has endured earthquakes, fires and pirate raids – but many of its colonial treasures survive to this day, alongside paintbox-hued houses that tumble down to the shore like a rainbow flowing into the sea.

Getting around
A great way to negotiate Valparaiso’s mind-bending geography is via the free walking tour (freetourvalparaiso.cl) that starts from Anibal Pinto Square at 10am and 3pm, Monday to Sunday. While your guide regales you with facts, fables and anecdotes about the day-to-day life of the locals – known as porteños – you’ll be admiring landmarks such as the Turri clock tower (Valpo’s very own Big Ben) and Palacio Baburizza, the Art Nouveau mansion of a local industrialist. 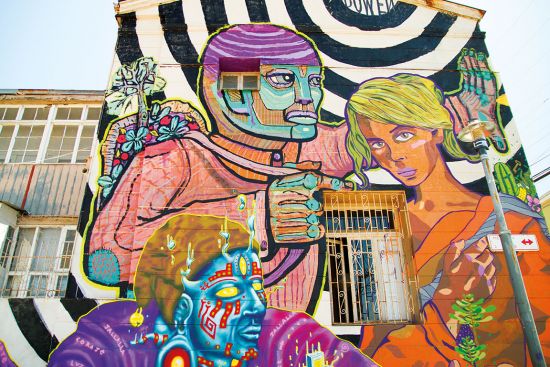 The city is also a hotbed of street art, and you’ll be shown spectacular (and highly Instagram-worthy) murals, mocking everything and everyone from Starbucks to the former dictator Augusto Pinochet. Feet starting to hurt? Don’t worry, you can bypass the city’s steeper slopes by riding the charming clickety-clack ascensores – brightly painted funicular cars, many of which date back to Edwardian times. The tour wraps up at Prat Dock, where for £1.50 you can hop on a rustic fishing skiff for a pootle around the bay (you’ll hear the territorial snorting of the sea lions well before you see them).

Room with a View
Chile is known as the Land of the Poets, and Nobel Prize-winner Neruda certainly left his mark here. “I want to find in Valparaiso a little house to live and write quietly,” he wrote. “It should be solitary, but not excessively so.” His wish was granted and he moved into La Sebastiana in 1961. Seeming to hang over a cliff edge, this two-tone, five-storey hilltop house takes its inspiration from a ship’s cabin.

Now a museum, it offers jaw-dropping views over the city, especially from the fourth-floor study where the poet and diplomat penned verses about the sea in his signature green ink. Antique marine maps and porthole windows are further clues to Neruda’s lifelong love affair with all things nautical, while the sitting room is stuffed with fantastical paraphernalia including a retired merry-go-round horse and an embalmed bird from Venezuela. Here the poet would entertain his guests, mixing his favourite coquetelón cocktails – Cointreau, cognac and champagne – from a kitschy pink bar. 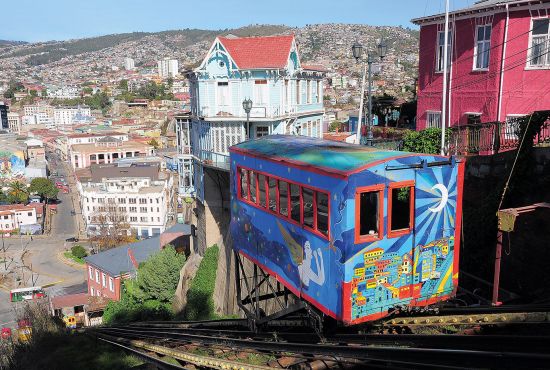 Food and Drink
It’s no secret that Chile does a fine cabernet sauvignon, and a visit to Valparaiso puts you within spitting distance of 3,530 acres of lush vineyards, otherwise known as the Casablanca Valley. Chile’s answer to California’s Sonoma, its aromatic grapes are regularly blanketed in cooling fog by the Pacific Humboldt Current. Today, the region is world famous, but it’s striking to think that grazing animals dotted these emerald hills just 40 years ago.

Wine Tours Valparaiso (winetoursvalparaiso.cl) offers half and full-day tours, taking in the celebrated Casas del Bosque, Emiliana, Morandé and Quintay wineries. The company’s founder is Michael Ayandokun, a Brit (and adoptive porteño) whose bilingual skills and viticultural knowledge come in very handy when choosing which bottle of syrah, pinot noir or sauvignon blanc to take home. The latter takes star billing at Casas del Bosque, the award-winning ranch-like winery run by New Zealander Grant Phelps. Here you can head up to the Mirador viewpoint, or simply flop on a sun-lounger among the vines.

Prefer your plonk as pure as possible? At 2,760 acres, Emiliana is officially the world’s largest organic vineyard, and it’s the home of South America’s first certified biodynamic wine. With alpacas and peacocks strolling the grounds, and a superb cheese and chocolate tasting to tempt you, this is a lovely place to linger. But with your appetite whetted, you’ll be hungry to explore the gourmet delights back in Valpo.

For dinner with a stunning sunset thrown in, try Fauna (faunahotel.cl), a stylish restaurant and bar that sits atop a three-storey mansion on Cerro Alegre hill. The seafood-focused menu reels you in with the likes of sautéed octopus and amaranth-crusted red tuna with orange cauliflower purée. The cocktails are sensational, too – try a signature Valpo Punch as you drink in the panoramic view of Concepción Hill, Panteón Hill and the city’s rugged coastline.

If you fancy switching from grape to grain, Casa Cervecera Altamira (cerveceraaltamira.cl) is an excellent choice. This brewpub next to the Reina Victoria funicular offers a huge selection of ales – available in mini taster glasses – with some inspired speciality brews including Bourbon Coffee Stout and Strawberry Lager, and there’s a delicious menu of burgers and pizzas too. 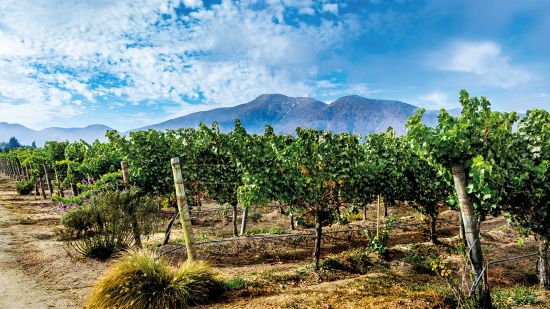 Further Afield
Manicured boulevards? Check. Picturesque squares overlooking the Pacific? Check. A Venetian-style palace? Check. And all this is just a 15-minute bus ride north of Valparaiso, in Chile’s fourth largest metropolis, Viña del Mar. Known as the Garden City for its Mediterranean climate and lush green spaces, Viña also offers swathes of golden sand – but the place to start your exploration is Parque Quinta Vergara and its namesake palace, now an art museum.

Treat yourself to a city tour by horse-drawn carriage, taking in the palace of Cerro Castillo and El Reloj de Flores, a fully functioning botanical clock. And don’t miss Castillo Wulff, a turreted confection built on a rocky outcrop with a crowd-pleasing glass-floored balcony.

Never made it to Easter Island? Head to the Francisco Fonck Museum (museofonck.cl) and you’ll see a real-life moai statue. Then get back to the beach for sunset, grabbing a snack at one of the popular food stands. In no time you’ll be living by the locals’ mantra: bueno, bonito, barato (good, pretty, cheap)! 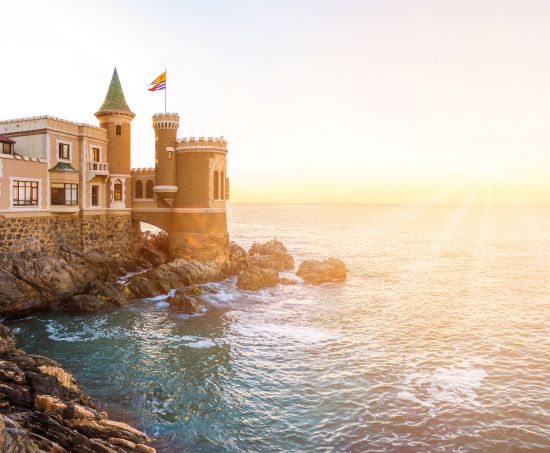 Entry requirements
UK passport holders visiting Chile for less than 90 days do not require a visa, but make sure your passport has at least six months’ validity remaining.

When to go
Valparaiso is a reliable year-round destination with no bad time to visit. Winter (June to August) can be cool and cloudy, while summer (December to February) is generally sunny and pleasant. Wine lovers should try to coordinate their visit with Casablanca Valley’s La Vendimia grape harvest festival, which includes a variety of events held between late February and early May.

Getting there
Cruises dock at the VTP (Valparaíso Passenger Terminal) opposite Baron subway station, a short ride from the city centre. Alternatively, hop in a yellow taxi, which will take you there in five minutes. Most tourists explore on foot, using the vintage funiculars and trolleybuses. Want to cover a lot of ground quickly? The 612 bus takes you up and down eleven of Valpo’s hills. Trips to Casablanca Valley are best done with an organised tour, as public transport isn’t available between the wineries.