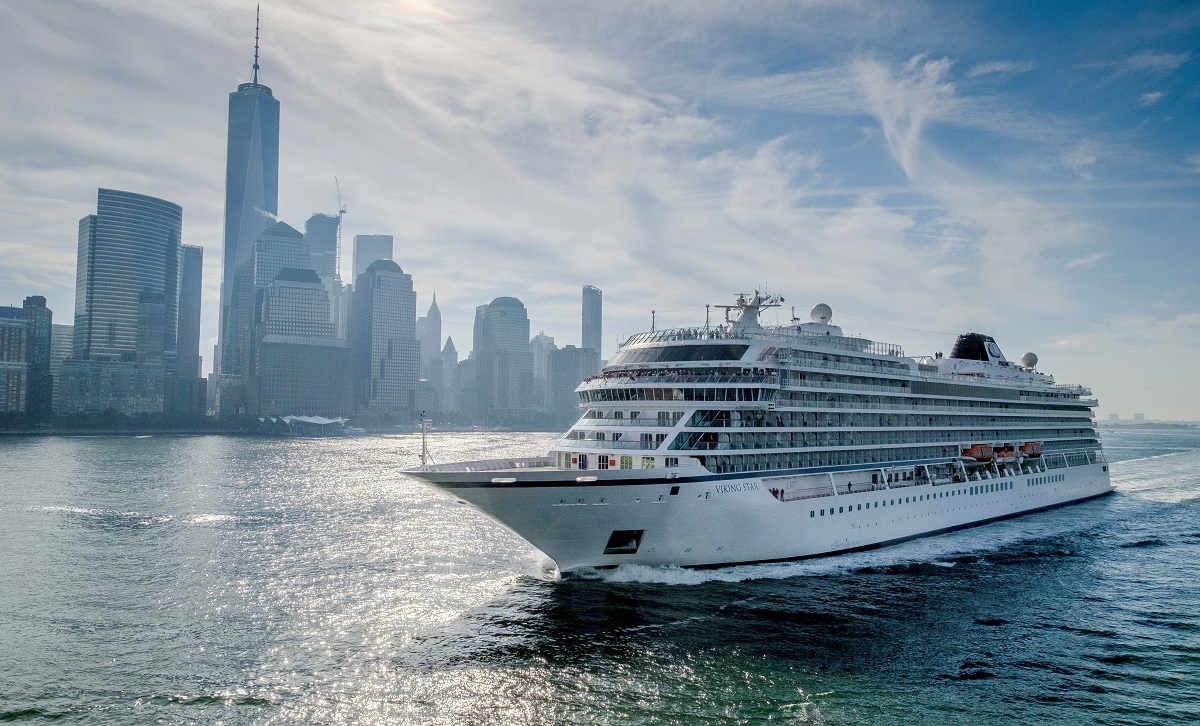 Viking Cruises today announced that American chemist, emergency room physician and recently retired NASA astronaut Dr. Anna Fisher will be honoured as godmother to its fifth ocean ship, which will debut in July 2018. The new ship has been named Viking Orion® after the prominent constellation and in honour of Dr. Fisher’s contributions to NASA’s Orion exploration vehicle project. The announcement was first made by Viking Chairman, Torstein Hagen, during a press conference in New York City celebrating the first call in Manhattan for the company’s third ship, Viking Sky®.

The 930-guest Viking Orion reached a major construction milestone last week, when the ship met water for the first time during her “float out” ceremony at Fincantieri’s Ancona shipyard. Dr. Fisher attended the September 28 ceremony and assisted with several maritime traditions. Viking Orion will spend her maiden year sailing itineraries in the Mediterranean, before making her way to Asia, Australia and then Alaska.

“Vikings were the original long-distance explorers and the first to use the stars and constellations as a way to navigate uncharted territory,” said Torstein Hagen, Chairman of Viking. “The spirit of exploration is at the heart of everything we do, and so I am especially proud that an astronaut will be honoured as godmother to our new ship. Dr. Fisher is a past Viking guest, a fellow scientist and a true explorer. As one of the first women in space, she has inspired generations of curious minds, and I look forward to welcoming guests onboard Viking Orion to learn more about her impressive career in space exploration.”

“The idea of exploring new territories has always appealed to me, whether through science or by travelling the world. I was 12 years old when I heard Alan Shepard’s voice on the radio during his sub orbital flight, and at that moment, I knew that I also wanted to explore beyond earth’s atmosphere. I knew from that young age that I wanted to be an astronaut,” said Dr. Fisher. “I always wanted to be an explorer and I am proud and honoured to be godmother to Viking Orion – a ship that was designed to help her guests see more of the world.”

A float out ceremony is significant because it denotes the first time a ship touches water and moves into its final stage of construction. Viking Orion’s float out began at approximately 11:00 a.m. local time, and in keeping with maritime tradition, Dr. Fisher, as godmother to the ship, assisted with the ceremony, first “mast stepping,” by welding coins under the ship mast. The commemorative coins she welded represented her birth year, as well as the birth year of Chairman Hagen. Two special coins were also welded to represent members of the Hagen family: 1911 to represent Ragnhild “Mamsen” Hagen, the mother of Chairman Hagen, and 2012 to represent Finse, the yellow Labrador of Karine Hagen, Viking’s senior vice president and daughter of Torstein Hagen. Dr. Fisher then cut a cord to allow water to begin flowing into the ship’s building dock. Following a two-day process that set Viking Orion afloat, the ship was then moved to a nearby outfitting dock for final construction and interior build-out.

Born in New York City and raised in Southern California, Dr. Fisher holds bachelor’s and master’s degrees in chemistry, as well as a Doctor of Medicine degree, from the University of California, Los Angeles. Selected as an astronaut in January 1978, Dr. Fisher was one of the “original six” women accepted into NASA’s Astronaut Training Program. Dr. Fisher became the first mother in space when she served as a mission specialist on STS-51A aboard the Space Shuttle Discovery, which launched on November 8, 1984. During her NASA career, which spanned more than three decades, Dr. Fisher contributed to three major initiatives: the Space Shuttle program, the International Space Station and Orion, NASA’s new crew-rated exploration spacecraft. Prior to her retirement in April 2017, Dr. Fisher was also the oldest active American astronaut. In celebration of her retirement, Dr. Fisher sailed on Viking’s Rhine Getaway itinerary in July 2017.

Viking’s ocean ships have a gross tonnage of 47,800 tons, have 465 cabins and accommodate 930 guests. Viking Orion, formerly known as Viking Spirit, is the fifth of eight ocean cruise ships currently planned for the fleet. By 2019, Viking will welcome its sixth ship and will become the largest small ship ocean cruise line. Two additional ships are on order for delivery in 2021 and 2022. Viking’s ocean fleet features understated elegance and modern Scandinavian design. Highlights include:

Explorer Suites: The ships feature 14 Explorer Suites, which are two-room suites ranging from 757 to 1,163 sq. ft. that offer sweeping views from wraparound private verandas as well as the most amenities and privileges of any category onboard.

Two Pool Choices: In addition to the Main Pool with a retractable roof permitting any-season swimming, the ships feature a first-of-its-kind glass-backed Infinity Pool cantilevered off the stern, allowing guests to swim surrounded by their destination.

LivNordic Spa: In keeping with Viking’s Nordic heritage, The Spa onboard is designed with the holistic wellness philosophy of Scandinavia in mind—from the centuries-old tradition of the sauna to a Snow Grotto where snowflakes gently descend from the ceiling through chilled air. Berlitz Cruising & Cruise Ships 2017 named it one of the “5 best cruise ship spas.”

The Wintergarden: Guests looking for serenity will find it in the Wintergarden. In this elegant space under a canopy of Scandinavian trellised wood, guests can indulge in afternoon tea service.

Dining Choices: Viking’s ships offer multiple restaurant locations and food choices—from fine dining in The Restaurant, which serves three full meals and the widest choice of culinary options, and the World Café, which serves international fare and regional specialties—to intimate dining experiences at The Chef’s Table, which offers a multi-course tasting menu complete with wine parings, and Manfredi’s, which features freshly prepared pastas and Italian favorites. Additionally, The Kitchen Table focuses on regional dishes from market to table; the Pool Grill specializes in gourmet burgers; afternoon tea and scones are available in the Wintergarden; and Mamsen’s serves Norwegian deli-style fare. Furthermore, with multiple choices for outdoor seating during meals, Viking’s ocean ships offer the most al fresco dining at sea.

Enriching Entertainment: Connecting guests to their destinations through authentic experiences is central to Viking in creating “the thinking person’s cruise.” Instead of casinos and water slides, guests are offered Viking’s Culture Curriculum® including: world-class lectures on history and art; personalized opportunities for learning with the Viking Resident Historian program; tasting of vintage wines from their destinations; restaurant menus inspired by local cuisine; informative port talks; enriching Destination Performances featuring folkloric shows and musicians playing regional and classical music; an onboard cooking school allowing guests to learn how to prepare local specialties. Onboard Viking Orion, guests will also enjoy lectures on astronomy and space exploration.

Designed for discerning travelers with interests in science, history, culture and cuisine, Chairman Torstein Hagen often says Viking offers guests “the thinking person’s cruise” as an alternative to mainstream cruises. Ships are small to get guests closer to their destination, with more time in port and more overnights. Onboard, guests find serene Scandinavian spaces, where every room is beautiful and functional, quiet and filled with light. All-veranda ships mean that guests experience every day with a new, expansive vista. With the most al fresco dining at sea, featuring regional cuisines and always-available American classics, Viking’s guests can truly dine in their destination. A focus on cultural enrichment brings immersive experiences onshore and onboard. And only The Viking Way brings guests itineraries that feature Local Life, Working World and Privileged Access experiences.

In addition, Viking Inclusive Value provides a small ship experience at a big ship value and no nickel-and-diming – with every cruise fare including a veranda stateroom, shore excursions in each port of call, all onboard meals, and all port charges and government taxes. Guests also enjoy many complimentary amenities as part of their fare, including: beer and wine with lunch and dinner service; premium dining reservations; Wi-Fi; self-service laundry; access to the Thermal Suite in the LivNordic Spa; and 24-hour room service—an included value of more than $200 per person, per day for an average cruise.