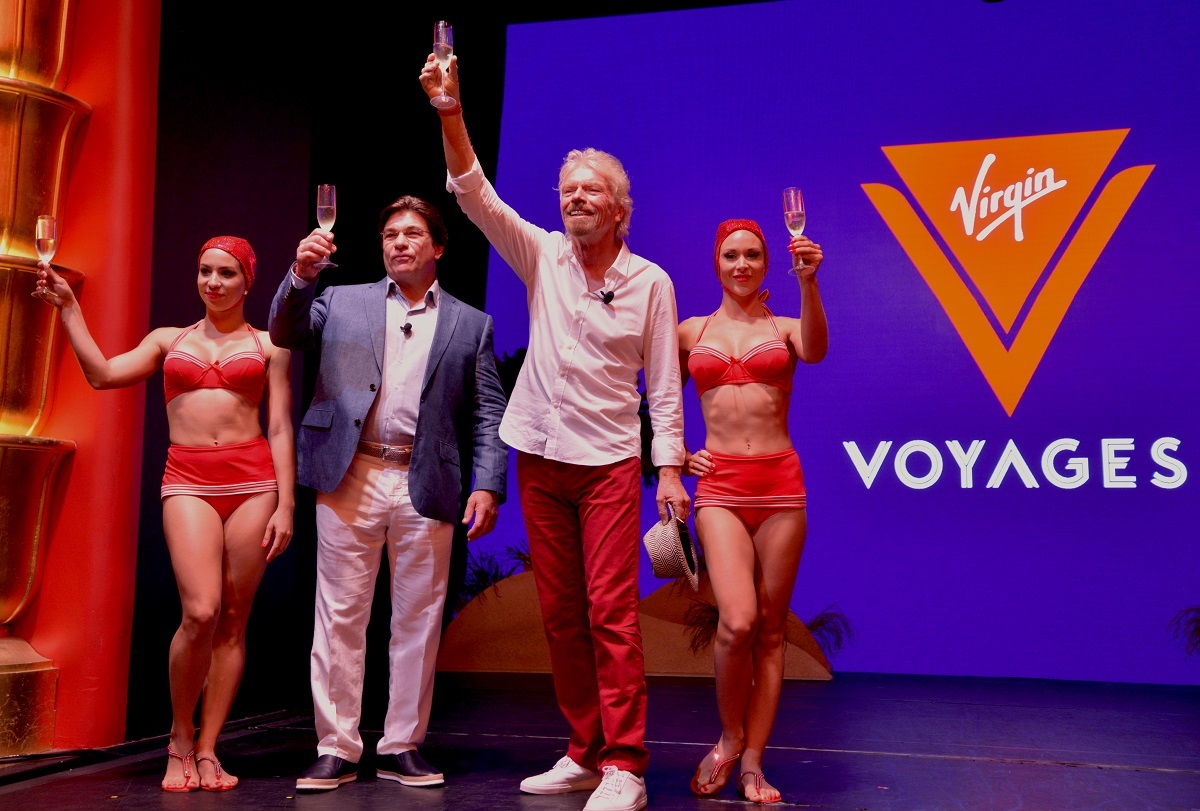 Virgin Group founder Sir Richard Branson today revealed Virgin Voyages as the inspiring new identity for the company’s cruise line. Joined by the company’s President and CEO Tom McAlpin, they announced the name, and shared that Virgin Voyages has officially signed a ship building contract for three vessels with Italian master shipbuilder Fincantieri, and that the company will be the first cruise line to adopt the clean energy system, Climeon Ocean.

The revealing event held at the Faena Hotel Miami Beach featured a stunning theatrical performance where Sir Richard appeared with two performers who danced on deck chairs in front of an audience of international news media, Miami politicos and business leaders.

Sir Richard expressed Virgin Voyages’ commitment to changing cruising for good. “Thousands of future sailors and travel professionals shared their thoughts with us and tasked us with delivering the most irresistible vacation at sea and that our name alone should leave them dizzy with anticipation,” said Sir Richard. “I’m excited to reveal we are now Virgin Voyages, and while we have lots of work ahead to build our three ships, we can’t wait to welcome you aboard the ship of things to come.”

Virgin Voyages, backed by lead investors Bain Capital Private Equity and Virgin Group, expects the multi-billion dollar financing package for the purchase of its three ships to be finalized shortly. The lead lending partners will be Cassa depositi e prestiti (Cdp) and UniCredit, and the loan will be fully backed by Italian export credit agency SACE and supported by SIMEST, both subsidiaries of Cdp. McAlpin outlined a ship building schedule including steel cutting in early 2017, followed by the keel laying in Genoa in the fourth quarter of 2017.

“Our world class partners like Bain Capital Private Equity, Virgin Group and Fincantieri as well as financial powerhouses like Cdp, UniCredit, SACE and SIMEST, showcase Virgin Voyages’ strong backing and commitment to developing an incredible product. This is anything but just another cruise or holiday, it will be a transformational experience delivering a very ‘Virgin style’ of adventure,” said McAlpin.

Virgin Voyages is the first major cruise line to partner with Climeon, a world-renowned clean energy innovator. Virgin will install Climeon Ocean, a system that will transform low-grade energy into clean electricity, on all three of its ships. The resulting environmental impact will be an estimated 5,400 tons of carbon dioxide savings annually per ship—an amount that would take 180,000 trees 30 years to absorb.

“The Climeon heat power system is an environmental breakthrough, and working with Virgin is of major importance to us. We are excited that Sir Richard Branson and Virgin, with their focus on sustainability, have decided to become a pioneer of this technology. Transforming hot water to electricity will be a major source of energy production going forward,” said founder and CEO of Climeon, Thomas Öström.

Virgin Voyages’ first ship will arrive at PortMiami in 2020, hosting more than 2,700 sailors and 1,150 spirited crew members. For the first ship, Virgin Voyages will offer a range of Caribbean itineraries to ports that deliver unique and very social experiences. Future sailors are invited to check out Virgin Voyages by visiting www.virginvoyages.com or following @virginvoyages on Instagram, Snapchat and Twitter or, of course, Facebook.