Scotland’s largest and most sociable city combines gastronomy, art and culture with an idiosyncratic charm and humour that’s all its own. This is a place where the measures are large, the locals are straight-talking and the museums are some of the best in the world.

Charles Rennie Mackintosh’s art nouveau architecture can be recognised across the city, alongside works by Alexander “Greek” Thomson. This urban landscape is tempered by beautiful green spaces – including the renowned Kelvingrove Park and Botanic Gardens in Glasgow’s West End – as well as modern edifices by Zaha Hadid and Norman Foster.

Elsewhere, churches have been repurposed as theatres and restaurants, while an eclectic dining scene mixes local produce with cutting-edge cuisine. You’re never too far from a cosy ‘wee’ pub, and the legendary nightlife ensures there is plenty to do after dark. Just don’t forget to pack an umbrella.

What to see in Glasgow

Recognisable by its flamboyant gothic spires, this is one of Scotland’s most prestigious institutions, with paintings by Van Gogh, Rembrandt and Titian. The star of the show is Salvador Dali’s huge Christ of St John of the Cross, cannily snapped up by the city for just £8,000 before the paint was dry (the Spanish government has reportedly tried to buy it back for £80 million, but Glasgow won’t sell). glasgowlife.org.uk

A historic drover’s track that still forms a green link from outside the city to Kelvingrove Park and the Botanic Gardens in the centre, this charming, tree-lined trail meanders nine miles south from Milngavie (pronounced ‘mulguy’) to meet the mighty River Clyde. Worked up an appetite? Stop at the riverside Inn Deep pub for a plate of their famous hot wings. walkhighlands.co.uk

Built in 1909, gutted by fire in 2014, painstakingly rebuilt, then devastated by a second fire in 2018, Charles Rennie Mackintosh’s greatest work now lies in ruins, but remains a place of pilgrimage for architecture buffs the world over. Glaswegians are determined that the building will rise again – but in the meantime, console yourself with a visit to the nearby Singl-end café for a steaming bowl of soup. gsa.ac.uk

Another Mackintosh masterpiece, this architectural gem is Scotland’s centre for design. Explore multiple levels of galleries and climb the 134-step spiral staircase for a bird’s-eye view of the city, before enjoying a coffee at the Doocot Café. The Lighthouse is tucked away on Mitchell Lane – also home to plenty of bars and restaurants, including Tabac, Bar Soba and Sugo Pasta Kitchen. thelighthouse.co.uk

More time to explore? Loch Lomond and the Trossachs National Park is just a 45-minute trip from Glasgow, as well as being within easy reach of the cruise terminal. Revel in the undulating landscape of these ‘bonnie banks’ and enjoy lunch at the Boat House restaurant, which overlooks the loch. To get there, either hire a car or take the train from Glasgow Queen Street to Balloch. lochlomond-trossachs.org

Located on Glasgow’s cobbled Ashton Lane, Ubiquitous Chip is a family-run Glasgow institution. Begin with a ‘wee dram’ by an open fire in the Big Pub before dining in the Brasserie – all lofty ceilings, twinkling lights and trailing greenery – for contemporary Scottish cuisine, including The Chip’s own venison haggis. Sister restaurants Stravaigin and Hanoi Bike Shop also come highly recommended. ubiquitouschip.co.uk

Set in a converted gothic church, Cottiers is a bar, restaurant and theatre with terrific ambience. The al fresco seating area buzzes throughout the summer, while roaring fires and fairy lights create an enchanting setting in the winter months. The menu majors on upmarket comfort food, with the likes of whisky-glazed smoked salmon, bangers-and- mash and fully loaded burgers. This romantic venue is also very popular for weddings. cottiers.com

This pocket-sized seafood restaurant can be found in trendy Finnieston, a creative hub lined with bars and artists’ studios. Open since 2009, Crabshakk continues to deliver some of the best fish in Scotland. Sit at the bar for champagne and oysters, or tuck into generous platters of langoustine, lobster and – of course – crab in the relaxed, rough-hewn wooden seating area. crabshakk.com

A lack of signage makes this enigmatic bar and restaurant hard to spot, but look out for its teal blue frontage at 239 North Street. Chinaski’s is currently updating its food and drinks offering, but typically serves pizzas and burgers, all washed down with a glass of bourbon, which can be enjoyed in the heated outdoor terrace and beer garden. The hipster-friendly venue also features resident DJs. chinaskis.com

Cruise ships call at the city from March through to November, but May to September offers the fairest chance of a sunny day.

Central Glasgow is a pleasure to explore on foot, but the city also boasts its own 15-stop subway system, nicknamed ‘The Clockwork Orange’. This will take you from the city centre to the West End with ease, and you can even partake in a ‘sub-crawl’ of Glaswegian watering holes. Traditional black cabs and Ubers are also readily available. 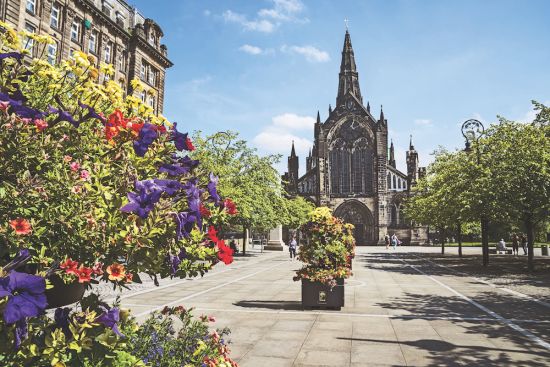 The west coast of Scotland is famously wet, and Glasgow is no exception, so make sure you pack a good rain jacket. It’s also chillier than you might be expecting (southerners take note), so bring plenty of layers.

If you’re stopping over for a night or two, Hotel du Vin (Devonshire Gardens) offers contemporary luxury. If you’re really splashing out, the five-star Kimpton Blythswood Square Hotel has an award-winning spa in the basement.

For super-soft hats, scarves and chunky knits in a vast spectrum of colours, try the aptly named House of Cashmere on Gordon Street, or the Glasgow Vintage Company is a local institution. houseofcashmere.co.uk 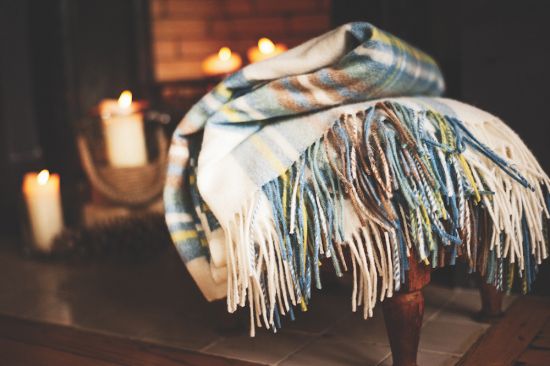 A purveyor of boldly patterned textiles and wallpapers, Timorous Beasties counts Jerry Hall and Paul McCartney among its fans. Immerse yourself in the brand’s evocative swirls at its flagship showroom. timorousbeasties.com

“Mother India is hands- down the best curry house in Glasgow. Order the king prawn and monkfish curry with a garlic naan bread, or the lamb mussalam.’ Anil Mann, designer.

“For retail therapy, head to Ingram Street for a mix of designer shops and high-end independent boutiques. Continue with a visit to nearby Princes Square.” Emma Brown, beauty salon owner.

“For a modern homage to Charles Rennie Mackintosh, explore House for an Art Lover in Bellahouston Park, and finish your cultural day out in the sculpture garden.” Lorna Grzybek, photographer.