After several years on life support as a cruising destination, the Mexican Riviera is finally on the cusp of a comeback.

Passenger numbers sailing out of out Los Angeles are climbing nicely again and, with the addition from November of the Carnival Miracle on year-round cruises to the highlights of Mexico, things are looking brighter at last.

Main beneficiary of this resurgent tide of interest is Mazatlan. Once known as ‘Mad Maz’ in the days of spring break holidays in the noughties, the port was dropped from almost every Mexican itinerary after an unsettling rise in tourist violence and robbery.

Make no mistake, the Mexican Tourist Board has had to work very hard to get the cruise lines back and, as of now, the jury is still out.

It’s not just shopkeepers, restaurants and bars that welcome the return of cruise passengers. The young macho men who earn their living from a little cliff-diving – nowhere near as spectacular as Acapulco but thrilling nevertheless – now have more tips being dropped into their open palms.

The city itself enjoys a beautiful and dramatic stance; set against the smoky blue backdrop of the Sierra Madre mountains. The long waterfront promenade is sprinkled with outdoor bars, cafes and restaurants that serve up the local seafood, together with tacos and burritos, with a side order of fabulous Pacific sunsets each night.
So, what to see? Mazatlan is a brash, breezy seaside resort, where the largest boardwalk in Latin America runs parallel to some eleven miles of stunning Pacific beach. Like nearby resorts such as Cabo San Lucas, Mazatlan is a magnet for lovers of deep sea 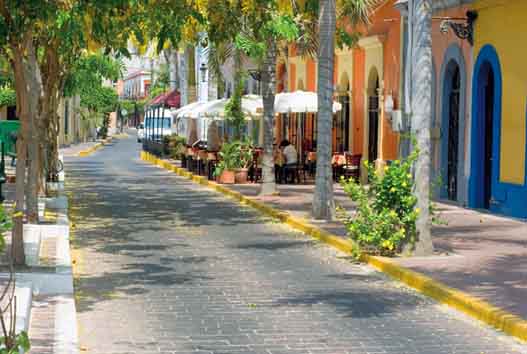 fishing and golf aficionados.  Mazatlan is a city that lends itself simply to casual strolling. The city centre, or Centro Historico, is chock full of restored shops and houses in a forties style, suffused with the seductive  lilt of merengue. Las Labradas is a unique, open air museum that showcases fantastic displays of fifteen hundred year old carved stone, along the broad sweep of San Ignacio beach, some forty five minutes’ north of the main sprawl of the city.

Mazatlan celebrates Carnival each February along with the rest of  Mexico. But one of the biggest calendar events here is the  nationally commemorated ‘Day of the Dead’. Usually celebrated every November 2nd, the Day of the Dead is the equivalent of our own Halloween, and somewhat akin to Memorial Day in the USA. It’s a big deal; the day when the veil between life and death is traditionally thought to be at its thinnest, and the locals celebrate it accordingly.

Unlike here in the UK, graveyards in Mexico are not maintained by local authorities, and their general upkeep is the responsibility of individuals. Hence the Day of the Dead is the time when graves of long gone ancestors are usually tended, cleaned and decorated by their families. It is also normal for candles to be lit, and offerings of food- mainly favourites of the deceased- are placed on and around the graves themselves. Families gather to talk, reminisce and sing songs around these makeshift altars.

This being Mexico, alcohol is also left out here for the returning spirits to slake their thirst, one doubtless exacerbated by the offerings of salt- the spice of life- that is also seen as a staple of the anniversary.

The Day of the Dead is, of course, as much a celebration of life as it is an occasion to mourn and remember.   As for Mazatlan, let’s hope it is now out of intensive care.