Did you see ITV’s The Cruise Ship documentary series this summer? Did it encourage you to book a cruise, or did it put you off a holiday at sea for ever?

The show has raised mixed feelings among cruising aficionados and there are many regular passengers who say the antics on screen would have put them off cruising if they didn’t already know better.

Princess Cruises took a gamble when they signed up to allow a camera crew on board Royal Princess. They had no control over the finished product, but they were prepared to take the risk to gain maximum publicity.

In these days of sensationalised and semi-scripted “reality” shows, no TV producer is going to be satisfied with a row of happy faces enjoying a good time in the Caribbean sunshine. They want a freak show with a collection of some of the odder passengers and the most attention-seeking members of crew.

So we were treated to a singularly strange vet from the north of England who was obsessed with the lack of mushrooms on her plate, and a fame-hungry chef who managed to get lost on a resort’s single road and couldn’t sing karaoke for all the salt caramel toffee in America.

The most important man on the ship, Captain Tony Draper, was relegated to a walk-on cameo role during formal night, while the film crew whipped up the tension by suggesting the laundry room was about to burst at the seams. 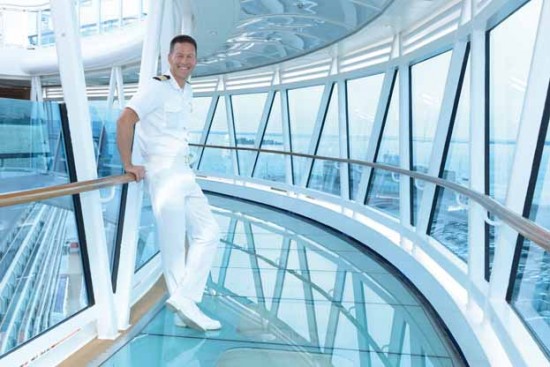 Fortunately for the saner viewer, there were two crewmembers at least who kept a cool head throughout. Cruise director Sam Hawker-Thomas was a bit of a Welsh wonder, while hotel manager Dirk Brand (Above) made sure everything on board ran with Teutonic efficiency. Vorsprung Dirk Technik you might say.

This was never going to be a rivet-counting documentary for a late-night slot on BBC4. The Cruise Ship was prime time entertainment, filling the Friday night gap between two episodes of Coronation Street.

As such, it was a success, attracting an average of more than three million viewers a week, and with its highest ratings for the fourth and final show.

It won’t have deterred other cruise lines from trying to find a way to get their product featured on television.

My money would be on an episode of Masterchef featuring the contestants cooking in a cruise ship galley – perhaps in competition on two different ships.