The top deck is covered in ice, the temperature is well below zero and darkness stretches throughout the day. Perhaps not quite the things which spring to mind when you mention the word cruise but, on this occasion, it was perfection.

Sailing through the heart of Norway on P&O Cruises’ Aurora, icicles tapering from the ships side rails, I looked up in awe as the Aurora Borealis illuminated the night sky. I had never felt more alive.

I make no secret that Norway is my favourite destination to visit. Perhaps it has something to do with my recently discovered Norwegian heritage, but I always feel a sense of calm and tranquilly when returning here.

This being my third time crossing into the realms of the Arctic, I’m no stranger to cruising Northern Europe and so was well prepared for those harsh winter climes! With little daylight, crisp, cold air and plenty of snow, Norway provides numerous opportunities to experience the Arctic winter at its best.

With most of the emphasis on seeing the northern lights, the itinerary was rather sparse visiting just four ports across the 12-night cruise. But as somebody who loves sea days and arctic weather, I certainly had no complaints. The ports which caught my eye? Tromsø – the gateway to the Arctic – and Alta – the city of the northern lights.

Our first port of call was Åndalsnes, a small settlement grand in scale, which provides a gateway for adventure. From there we headed north to Tromsø – a city which exudes culture and sophistication. Modern and inviting, you can marvel in the presence of the Arctic Cathedral or take a wander through the world’s northernmost botanical gardens. 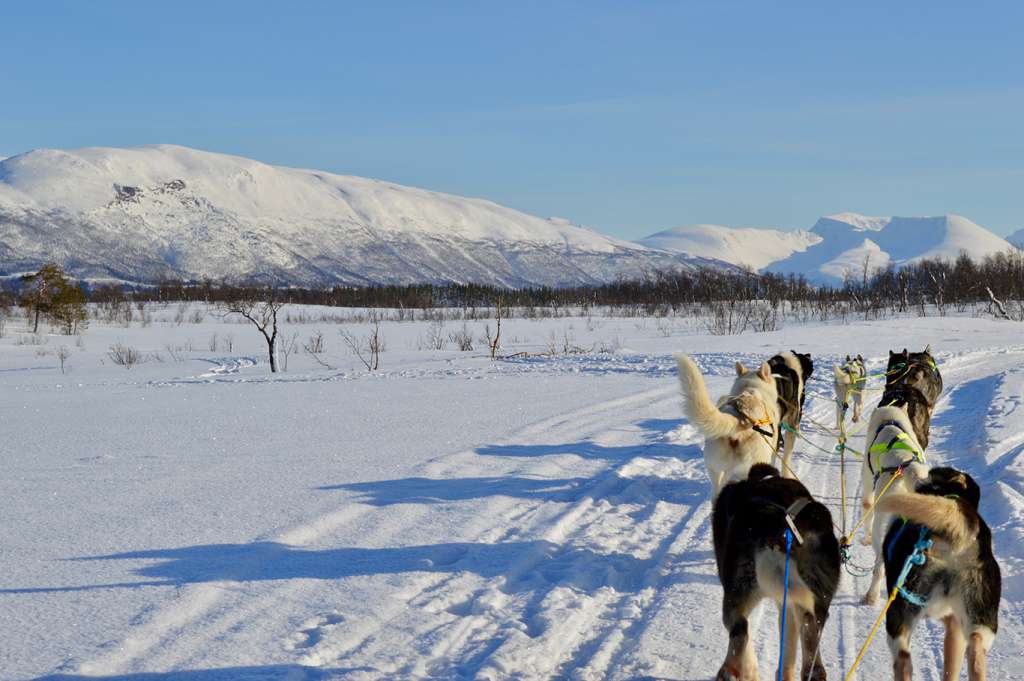 If you like adventure then Tromsø has you covered: snowshoe hiking, cross-country skiing and reindeer sledding are some of the activities on offer. For me, I took advantage of the copious amounts of snow and embarked upon a husky adventure!

Winter snow in Norway is unlike anything we experience in England. It glistens in the sun like millions upon millions of diamonds laden across the ground, so soft to the touch that you almost forget how cold it actually it.

Perhaps it was the countless stories I read as a child, but this coupled with my fascination with the Arctic has meant sledding with huskies has always been a dream of mine. Finally, my husky sledding dream became reality and it certainly did not disappoint! Gliding through the arctic tundra, summer life dormant below the fields of snow, it was truly out of this world.

Back onboard and getting ready for the evening ahead, I glanced through the balcony doors and spotted something glistening in the night sky. Surely not. So early in our arctic adventure? Fast forward five minutes and any thought of dinner had long since disappeared. Instead, there I was, stood on the balcony staring up at the night sky, completely entranced by the delicate lights of the Aurora Borealis, dancing between the stars. The perfect end to a perfect day. 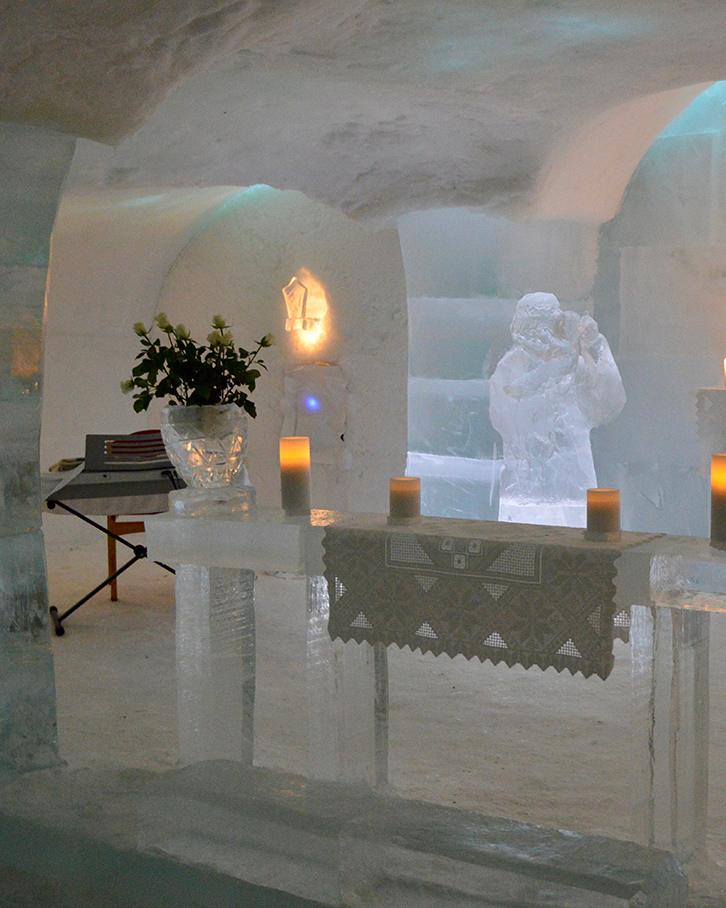 Our next port of call was none other than the northern lights capital, Alta. Much smaller than Tromsø but don’t let that fool you. Alta is the place to be if you have a passion for adventure! A snowmobiling safari and visit to the Igloo Hotel was on the agenda but after stepping ashore the world suddenly turned white – blizzard conditions had stuck!

Amazingly, it cleared as quickly as it begun and by the time I fired up my snowmobile, clad in a fetching thermal body suit, the skies were crystal clear. And we were off! Being with our escort at the front of the pack, I was allowed to unleash the full potential of my ride. The frozen air brushed across my face, whilst the ground sparkled in front of my eyes, all my senses were engulfed as I took an exhilarating journey through the arctic wilderness.

Back at base, it was time for something a little more sedate: signature ‘Igloo Blue’ shots at the ice bar brewed especially for the Igloo Hotel (and served in ice cubes, of course). Having watched Joanna Lumley in the Land of the Northern Lights on several occasions, I couldn’t pass up the opportunity to marvel at the craftsmanship of the Sorrisniva Igloo Hotel.

Only open from December to April (the rest of the year is too warm!) the hotel is re-designed each year. Outside the hotel looks like an ordinary, if rather large, igloo. Inside it is anything but ordinary. A constant internal temperature between -4 and -7 degrees, almost everything is made of snow and ice. The walls, the beds, the chairs, the chandeliers, the chapel – the list goes on. Day visits start from £19 per person, making it possible to experience the wonders of the Igloo Hotel without breaking the bank.

This marked the end of my adventure-seeking stint in the Arctic and all that separated us from Southampton was a stop in the beautiful region of Stavanger and some lazy sea days on the beautiful Aurora – our home from home throughout this incredible expedition.

Aurora is possibly my favourite ship in the P&O Cruises fleet. Elegant and unique, she is one of the friendliest ships at sea and provided one of our best cruise experiences to date. This was made possible by the outstanding crew, who went above and beyond to ensure we had an exceptional cruise. 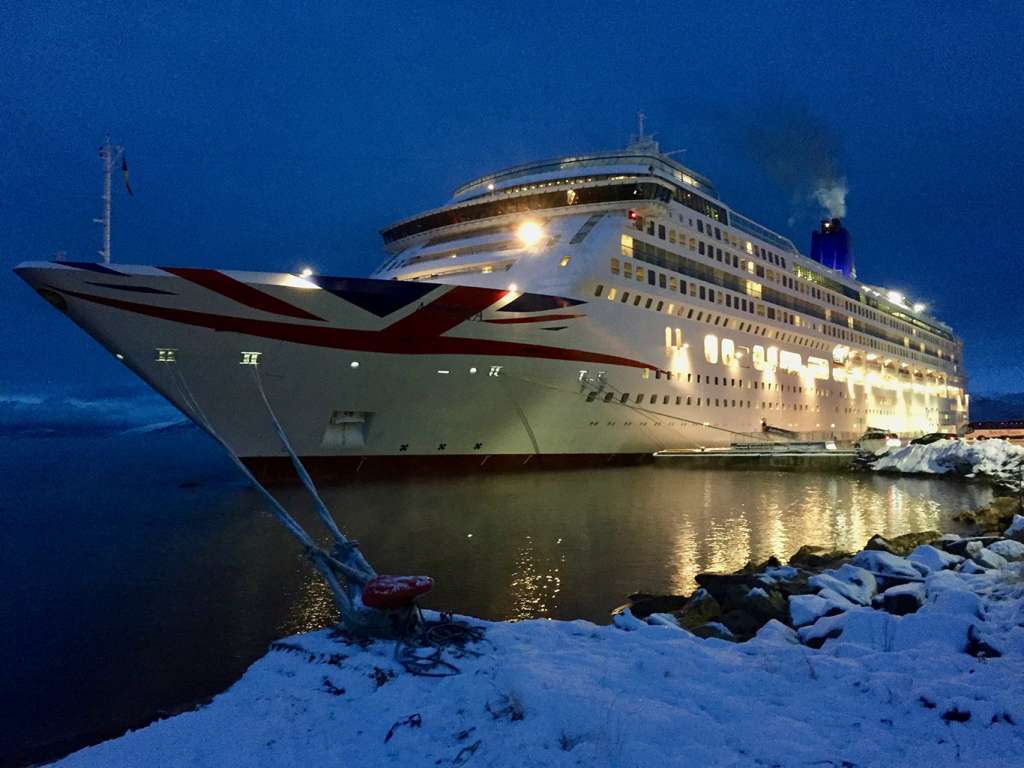 Evenings in Sindhu and The Beach House made for exquisite food while the main dining room proved a perfect retreat to enjoy a hearty meal after a day’s exploring. Our balcony cabin was inviting and comfortable with plenty of storage space for all those thermals.

Outside, snowmen popped up all around making our very own winter wonderland where, despite the temperatures, some brave souls still took to the pool!

Evenings were spent in the comfort of The Crow’s Nest and Andersons. Cocktail pianists, live vocals and an array of devilishly tempting drinks made for the perfect evening atmosphere.

By day, The Crow’s Nest provided the ultimate viewpoint for taking in the beauty of the Arctic, especially in Alta where our arrival was met with the few hours of natural daylight that occur at this time of year. Snow covered mountains and icy fjords, it was a serene paradise and a wonder to behold.

These wonders were apparent through to our last moments in the Arctic, providing a truly awesome finale. As we headed south to warmer climes, where rain would replace snow, the Arctic gave us one last hurrah.

Standing on the stern of Aurora, camera at the ready and the ships wake barely visible in the ambient lighting, the sky illuminated before our very eyes. Pockets of light dancing to a soundless tune, almost gloating in their magnificence. The ships vibrations made it impossible to take the perfect photo – but it didn’t matter – I was lost in the moment, overwhelmed by how truly incredible this adventure had been.

Daniel Bradley is The Cruising Baker who writes about his two passions: cruising and baking! Check out his blog here to read more of his work.