From historic buildings and cool beachside resorts to some of the best bars and restaurants in the world, local resident Tim Green reveals all

Birthplace of Aussie legends Kylie Minogue, Shane Warne and Dame Edna Everage, Melbourne is Australia’s second-largest conurbation. Capital of the State of Victoria – and once of the nation itself – this city of nearly five million souls is renowned for its cultural heritage, the grand Victorian buildings of its Central Business District, and its world-class restaurants.

Very different from Sydney, its brasher rival some 500 miles to the northeast, Melbourne is a delightfully easy city to explore, thanks to its extensive network of trams and pedestrian-friendly lanes (or laneways, as they’re known to Melburnians).

Built across the great Yarra River where it empties into Port Phillip Bay, Melbourne boasts a lovely coastline with cool beach resorts such as Brighton and St Kilda, so it’s no wonder that it regularly tops polls for the world’s best city to live in. 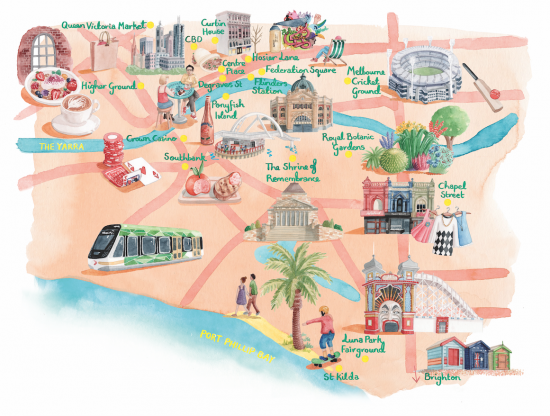 Foodies shouldn’t miss a blow-out lunch or dinner here – Melbourne offers the finest cuisine from all round the world – while fashion fans will find cool boutiques on buzzy Chapel Street. But wherever you go, you’ll get a very warm Aussie welcome. Just don’t mention your next trip to Sydney!

What Times Square is to New York and Leicester Square is to London, Fed Square is to Melbourne. Situated opposite the Victorian splendour of Flinders Station, this broad piazza is lined with galleries, cafes, bars and cinemas. It’s a great place to see live music and drama, but it really comes into its own when major sporting events are shown on a huge outdoor screen. Aussie rules football and cricket are the obsessions here, so if you’re in town when there’s a match on, head over and join the party.

You could easily spend a whole day and night by the side of the great Yarra River, enjoying a drink and a bite to eat, or simply marvelling at the street performers. Heston Blumenthal has a popular restaurant here – Dinner by Heston Melbourne – and don’t miss the swish Crown Casino, one of the world’s most glamorous gaming venues.

My top tip is to look under the Pedestrian Bridge where you’ll find a secret waterside bar called Ponyfish Island. Slap bang in the middle of the river, it has amazing Southbank views and is the perfect place to sink a couple of VB beers or a fine glass of Yarra Valley chardonnay.

Melbourne is justly famed for its network of European-style alleys and arcades. Chock-full of boutique shopping, cafe culture and street art, they spread all over the city, but the top ones to visit are Degraves Street (below), which has the best eateries, and Centre Place, which is noted for its world-class street food.

Situated on the banks of the Yarra, next to the Central Business District (above), this glorious natural oasis is home to some 8,000 plant species, many of them rare or spectacular (or both). Look out for the Grotto, a gorgeous sunken rock garden complete with waterfall, and stop off for a flat white at The Terrace cafe.

This moving monument to fallen Australian soldiers offers two fine photo opportunities. The memorial itself is beautiful, and its elevated position gives a spectacular view of the city.

Melbourne is famous for its street art. Featuring work by the best graffiti artists around the world, Hosier Lane is an Instagrammer’s dream.

Want to try the coolest restaurant in town? Head to Curtin House (curtinhouse.com), an amazing six-storey foodie mecca. Melbourne is also noted for its amazing Thai restaurants, and Cookie (cookie.net.au) is a corker, with authentic dishes, drinks and even a disco. And no visitor should miss the famous brunches at Higher Ground (highergroundmelbourne.com.au) – the perfect place for ‘avo’ on toast.

Melbourne’s huge Queen Victoria Market is a great place to go any time for Aussie gifts (think sheepskin and surfer T-shirts) but it really comes alive at night, with plenty of entertainment, music, craft stalls and street food.