Next Stop, Nowhere: Explore the unfiltered nature of Patagonia

Nothing had prepared me for the sheer wildness of Patagonia. From the heat and buzz of sophisticated Buenos Aires, where my journey began, we flew south across endless expanses of khaki-coloured grassland to Ushuaia, at the icy tip of South America, swapping flipflops for fleeces on the way.

Ushuaia, a cluster of brightly coloured low-rise buildings, huddles defiantly between snow-capped mountains and the wind-whipped Beagle Channel. Expedition ships line up along the quayside. To the north, hundreds of miles of wind-twisted forest and bleak mountain ranges. To the south, Antarctica.

Unlike most of the people browsing the many trekking shops in town, I wasn’t headed for the White Continent. Instead, I’d opted for a different kind of expedition, on the brand new Ventus Australis – a ship built specifically for meandering the misty channels and inlets around Tierra del Fuego, the wild, rugged archipelago at the tip of South America that’s divided between Chile and Argentina.

Chilean-owned Ventus is a sister ship to the older Stella Australis, and these are the only two vessels to explore this remote area, retracing the routes of the early explorers who sought a safe passage from the Atlantic to the Pacific. Both ships sail between Ushuaia and Punta Arenas in Chile, offering three or four-day itineraries. Along the way, guests have ample opportunity to explore by Zodiac inflatable, hike through lichen-draped forests and get close to the jagged blue-white tongues of massive glaciers.

Ventus Australis is elegantly appointed, with huge picture windows flooding her public spaces with light, but she is a proper expedition vessel too. There is no pool, no spa and no sun deck, because this is no place for basking. The weather in Patagonia can take your breath away: one minute, black clouds and lashing, icy rain; the next, dazzling rainbows, iridescent in the pure air. Then watery sunshine, clouds scudding across the sky. Then hail, maybe, or sleet. Even in midsummer, it’s cold.

A Patagonian cruise is all about immersion in nature, so distractions are kept to a minimum. There are no TVs in the cabins, and “entertainment” means talks on the environment, or documentaries about the great explorers. There’s no wi-fi or mobile signal, either – though once the pain of digital detox had passed, we soon rediscovered the pleasures of conversation, reading, or just gazing dreamily out at the passing scenery. 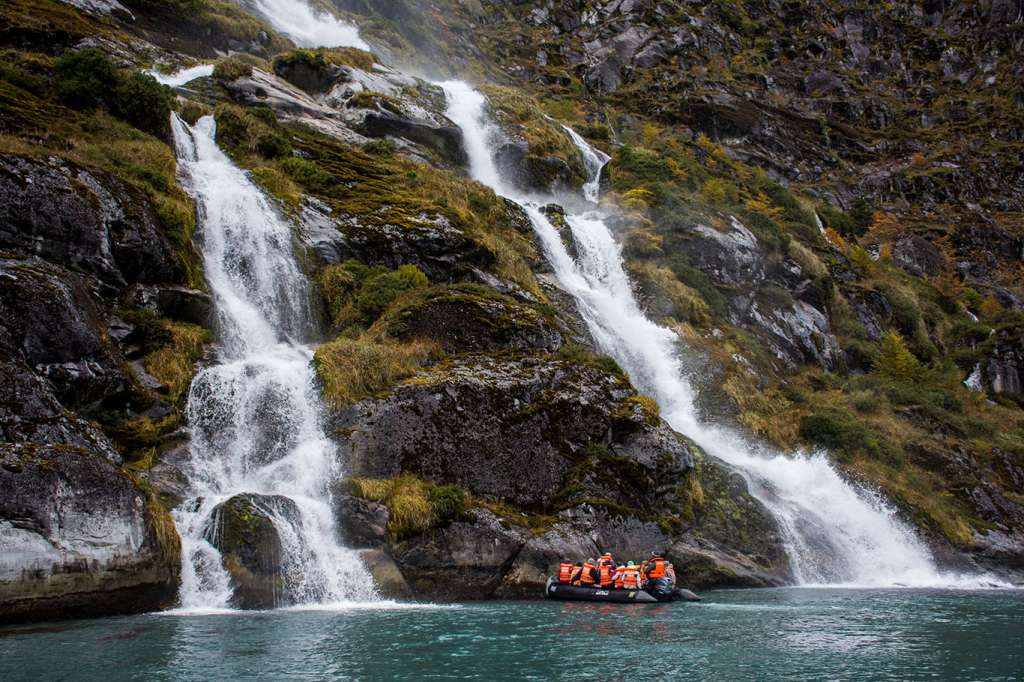 A welcome reception in the Darwin Lounge offered an opportunity to meet our travelling companions, some 200 of them from no fewer than 22 countries. Americans formed the largest group, alongside Chileans, Italians, French and Australians. My partner and I were the only Brits, but the calafate sours – powerful local cocktails – were flowing, and any language barriers soon broke down.

On the first morning we awoke to steely skies and whitecaps, but the captain gave the all-clear to land at Cape Horn, the southernmost point of South America. Our Zodiac skimmed across dark water so clear that you could see rocks below the drifting fronds of a kelp forest. A vicious wind whipped up as we clambered the slippery wooden staircase to a sculpture of an albatross, commemorating some 10,000 lives lost in these treacherous waters. The Cape is guarded by a squat red-and-white lighthouse, whose keeper – dapper in Chilean naval uniform – stays for a year in what must be one of the loneliest spots on Earth.

Ventus anchored later that day in Wulaia Bay, where a choice of hikes – easy and difficult – was offered. We joined guide Cristobal’s “difficult” group with an element of confidence but he marched off at such a cracking pace that soon we were gasping for breath and peeling off layers. “That’s just the warm-up,” he said, smugly.

You do need a degree of fitness for this cruise, but once we’d caught our breath we began to take in our surroundings: a curious forest of trees – evergreen beech, with spiky leaves. We picked tiny chaura berries, like miniature apples, with a crunchy inside, and the dark calafate berries that locals love. The trek took us through a vast, dead area of fallen trees – beaver damage, done by the North American beavers that were introduced, catastrophically, in the mid-20th century, for the fur trade. The experiment failed and the beavers, having no natural predators, multiplied out of control.

At the highest point of our route, the whole bay stretched out below us – a great vista of channels and forested islands, our ship tiny in the distance. Cristobal asked for a few moments of silence and we sat listening to the call of birds and the wind rustling in the trees.

The rest of our four-day expedition followed the same pattern, with two stops each day. And despite the uniformity of the surroundings – gunmetal skies, rocky shorelines and dark forest – each was different from the last. 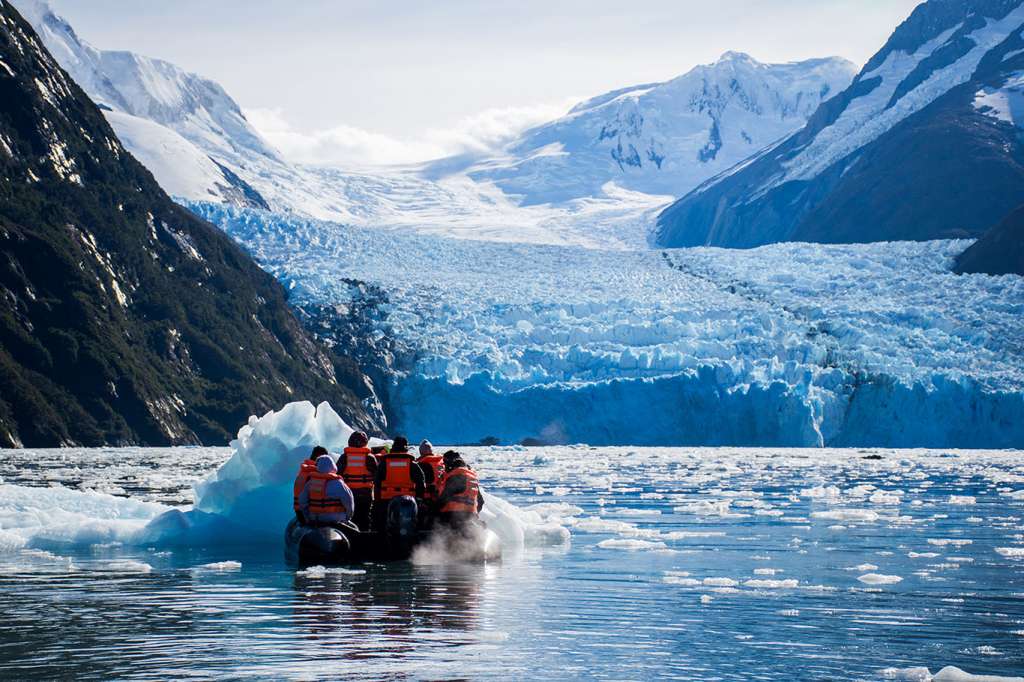 Pia Glacier, a craggy wall of blue-white ice, emitted pistol-like cracks as chunks calved off into the milky water below, creating mini tsunamis. The but steep, and despite a light drizzle we lingered, willing the glacier to perform. Back at the bottom, the bartenders had set up a hot chocolate station, with a welcome slug of whisky in each mug.

At the Garibaldi glacier the guided hike was billed as “extreme”, with threats of thigh-deep mud, so only a few diehards joined in. I kept vigil on board as we cruised the sound, where a colony of sea lions lolled under the beady eyes of huge black-and-red turkey vultures.

At the Aguila glacier we hiked our way round a glassy lagoon, venturing into the forest to admire swathes of spongy lime-green moss.

Condor glacier lived up to its name, our Zodiac pilot cutting the engine so we could watch a pair of these huge, stately birds nesting on a cliff edge, chunks of ice nudging against our keel.

Evenings on board were relaxed and jolly, all of us glowing from the abundant fresh air (and possibly the open bar). Dinners were both hearty and elegantly presented, with plenty of fresh fish, Patagonian lamb and, for the vegetarians, delicious concoctions of stuffed vegetables, quinoa (a local staple) and palm hearts. Desserts were extraordinary: fluffy cakes, meringues, mousses, chocolate brownies, tiramisu – and after all that hiking, why not?

My personal highlight came on our last day: the vast colony of Magellanic penguins on Magdalena Island. “Give the penguins right of way,” said Cristobal, which proved far from easy because there were thousands of them – nesting, squabbling, fishing off the rocky shore, tending their fat, fluffy chicks – and the brown, mossy terrain is riddled with their burrows. These birds are quite fearless, too, and several of us had our shoelaces and ankles pecked by inquisitive individuals, searching for nesting materials.

Four days was far too short a time to explore such a beautiful, unique landscape, but it felt a great privilege just to be there, almost alone, surrounded by the raw power and beauty of nature. I was enchanted.