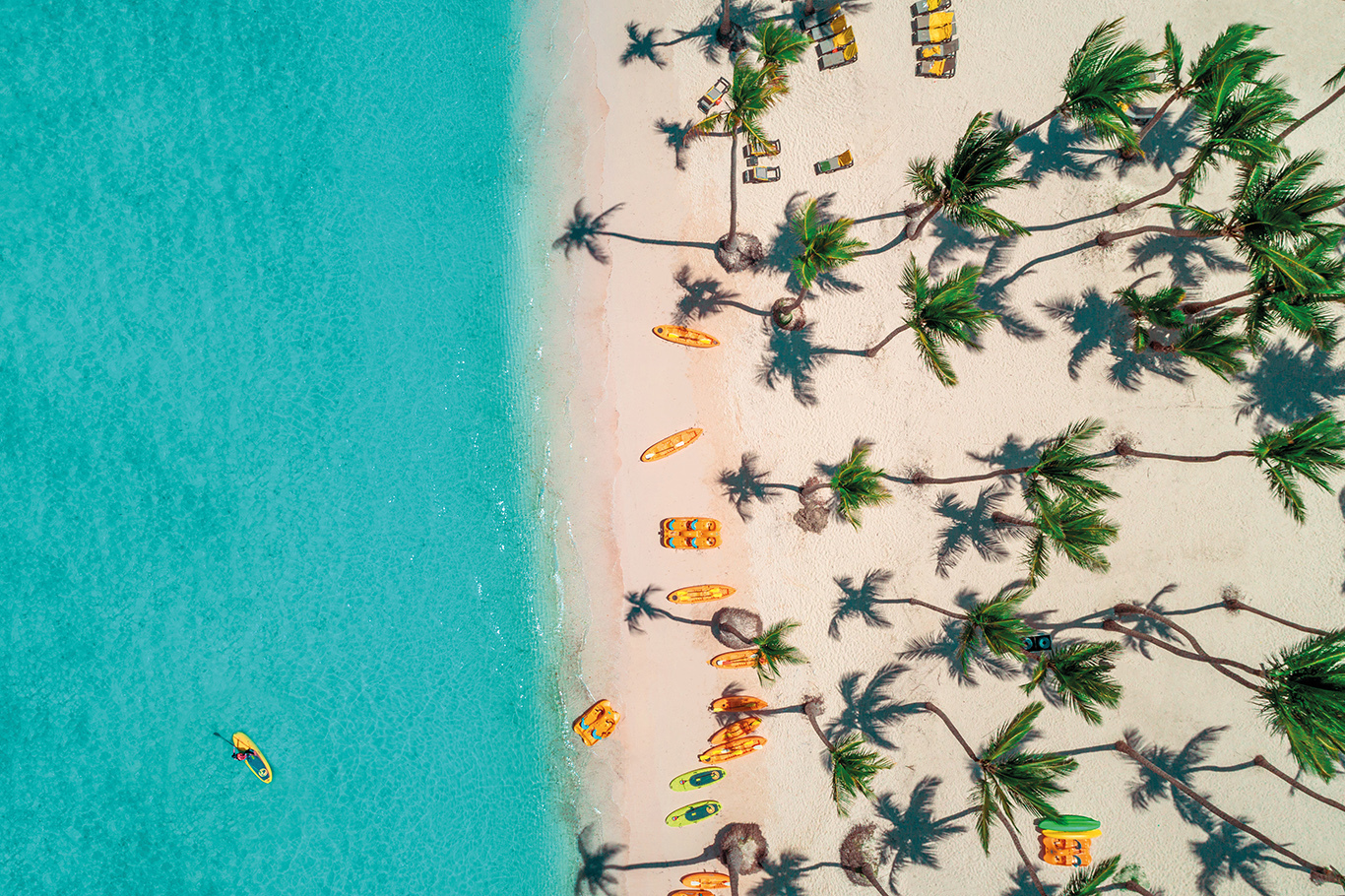 Made up of 7,000 sun-kissed islands, each with its own culture, heritage and amazing beaches, the Caribbean is the ultimate paradise cruise destination

Ah, a Caribbean cruise. The mere mention of its name conjures up the sensation of powdery white sand squidging beneath your toes as you wander along miles of pristine beaches. Or the ‘tin-tan-tin’ of steel drums under the shade of a coconut palm, creating that round-the-clock Caribbean party atmosphere.

Or maybe you’re imagining the hit of spicy heat from a mouthful of succulent jerk chicken, or the powerful kick of a rum punch. Whatever this part of the world means to you, you’ll know that its allure keeps a hold long after your tan has faded.

Maybe that’s why so many of us keep going back. Past year’s figures from the Cruise Lines International Association show a 10 per cent annual increase in holidaymakers from the UK – and that makes it our third most popular destination, beaten only by northern Europe and the Med. If you’re hankering for some Caribbean sun but you’re not certain which of these island nations is right for you, don’t panic.

There are plenty – 28 of them – to choose from, each with its own vibe. And as most Caribbean cruise itineraries visit a handful or more, you’ll soon find your own totally tropical favourite to enjoy…

Devastated by Hurricane Irma in 2017, the beautiful sister islands of Antigua and Barbuda are still undergoing a major reconstruction job. But that doesn’t mean the country is closed for business – in fact, there has never been a better time to visit, as your tourist dollars will do wonders for the recovery job.

And while Barbuda suffered horrendous damage, Antigua was relatively lucky, meaning you can still visit Nelson’s Dockyard, where Britain’s greatest naval hero was based from 1784 to 1787, before enjoying a spot of snorkelling in the crystal-clear waters of English Harbour.

There’s also the small matter of Antigua’s fabulous beaches – notably Pigeon Point and Dickenson Bay, which offer the perfect blend of thrilling and chilling, thanks to the wide choice of water sports, restaurants and bars.

And if you should ever get tired of sitting on a beautiful beach sipping cocktails, you can always check out the island’s capital, St John’s, where you can see the 18th century barracks at Fort James or visit the Docklands Museum and find out more about the region’s fascinating and turbulent history.

You’ve seen the TV advert, now visit the beach. That’s right, far from being an advertising fantasy, Pig Beach in the Bahamas is a bona fide tourist attraction where you can jump into the balmy waters and frolic in the surf with some four-trottered friends.

No one knows how the pigs arrived on the beach – the popular theories are shipwrecks or someone’s lost lunch – but they’re well and truly at home there, and you’ll find about 20 of them enjoying the deep blue. It’s preposterously cute and perfect for holiday snaps.

But these islands have more than pigs to bring home the bacon, and the capital Nassau offers plenty of highlights. The city centre has an almost Vegas-like decadence about it at night, with bars, nightclubs and casinos everywhere you turn. And if you’d prefer your thrills to be more adrenaline-pumping than wallet-draining, there’s an abundance of waters ports nearby to enjoy too.

There’s a beach in Barbados that has pink sand. That should tell you everything you need to know about the quality of coastline to be found on this former British colony. Crane Beach also has rows of palm trees and good surf, so no wonder it draws the crowds. But with more than 70 miles of pristine sands to choose from, there are plenty of quieter places where you can soak up the sun.

Yet there is so much more to Barbados then white beaches and warm sunshine. Take the wonderful capital, Bridgetown, for instance, which is where you’ll be porting. While most passengers will head straight for the Caribbean shore, why not stick around and explore this UNESCO-protected city? The main highlight is The Garrison – a sprawling colonial citadel built by the British in the 18th and 19th centuries, and the best example of its type to be found anywhere in the world.

It is easy to forget that Cuba is part of the Caribbean, even though it’s easily the region’s largest island. That’s because this proudly Latin – and socialist – country has always marched to the beat of its own (steel) drum, and is only now opening up to mass tourism.

Even today, making a trip to Cuba is like cruising back in time to the 1950s. From the multicoloured colonial buildings that line the streets to those classic American cars that the locals never got around to trading in, this is a country draped in shabby chic.

Havana is where the action is, and will most likely be your port of call on your Caribbean cruise. Take a wander down the Prado, the handsome central boulevard; get political at the Museum of the Revolution, then feel the salsa energy pulsing from the city’s numerous bars and clubs.

And as the country becomes more receptive towards Western influences, those bars are getting more and more bohemian – making them a hip destination to sip your Cuba Libre until sundown and beyond.

For such a small place – barely bigger than the Isle of Wight – Curaçao packs in a lot of culture and heritage. It has been conquered and swapped between nations for centuries, with sovereignty passing from Spain to Britain to the Netherlands, where it remains to this day. And that means there is a distinctly European flavour to this tropical paradise.

Wander down the streets of the capital, Willemstad, and you’d think you’d taken a wrong turn and got off in Amsterdam. The candy-coloured colonial buildings form a UNESCO-protect Heritage Site that also houses some highly enticing boutique shops, bars and restaurants.

In addition, Willemstad is also home to the oldest synagogue in the Americas, dating all the way back to the 1650s and still in use today. But for all its European heritage, Curaçao is still a distinctly Caribbean destination, with bountiful beaches – 35 in all – and plenty of popular coastal diving spots. They mix a mean cocktail, too, with their homegrown spirit Blue Curaçao (don’t be misled by the colour – it tastes pleasantly of oranges).

And now for something completely different. Dominica is not your stereotypical Caribbean island (nor should it be confused with the Dominican Republic, an entirely separate country some 600 miles to the northwest). For a start there’s not much in the way of beaches, and you won’t find gaggles of tourists getting merry on the local rum. Instead, this is an opportunity pull on your walking boots and connect with nature.

There are more than 300 hiking trails to follow, and each one leads somewhere spectacular. There’s Boiling Lake, where volcanic heat keeps the blue water perpetually bubbling like a giant saucepan and the air is thick with sulphurous steam. Or there’s Titou Gorge, where you can swim beneath towering cliff walls. And if all that hiking has sharpened your appetite, grab yourself a taste of that famous Caribbean delicacy and Dominican favourite, saltfish (tip: don’t add seasoning – the clue is in the name).

The most celebrated of all the Caribbean nations – think James Bond and Bob Marley, Noel Coward and Usain Bolt – Jamaica is the quintessential island paradise. But while most Caribbean cruise lines will port in the beach haven that is Falmouth, it’s worth making your way across the island to Kingston, the capital – especially if you’re lucky enough to have an overnight stay.

Against the stunning backdrop of the Blue Mountains, Kingston is a music-lovers delight.

Head to the Bob Marley Museum, the reggae superstar’s own home, which has been preserved as it was on the day he died in 1981, including the studio where some of his most famous songs were created. If you prefer to stay close to Falmouth, there’s no shortage of activities to keep you occupied – including horse-riding on the beach. Ever dreamed of galloping through the surf?Here you can do exactly that, while gaining a fresh viewpoint on the natural beauty of this fabulous island (cowboy hat optional).

Bursting with charm and character, this twin-island nation offers twice as much as most other Caribbean cruise destinations.

For many years one of the less developed Caribbean havens – though lately it’s been catching up – St Kitts & Nevis has beaches galore, from Frigate Bay South, which is popular with visitors for its bars and restaurants, to the more laid back South Friar’s Beach, which is preferred by the locals.

But this is more than just another sun-and-sand hotspot, because on St Kitts you’ll find something rather special – the towering dormant volcano known as Mount Liamuiga. Rising to a sky-scraping 3,792ft, this is one of the highest peaks in the entire Caribbean region.

Formerly named Mount Misery, because it was said that native Caribbean Indians jumped into its crater following a failed uprising against English and French colonists in the 17th century, Liamuiga is now the perfect destination for a jungle hike.

Along the way you’ll see a well-preserved rainforest environment, inhabited by native green vervet monkeys, and you’ll enjoy views of the rocky coastline that was formed by the volcano’s most recent explosion (but don’t worry – that was 1,600 years ago).

Editor’s Note: This post was originally published September 2018 and has been updated for accuracy and comprehensiveness.