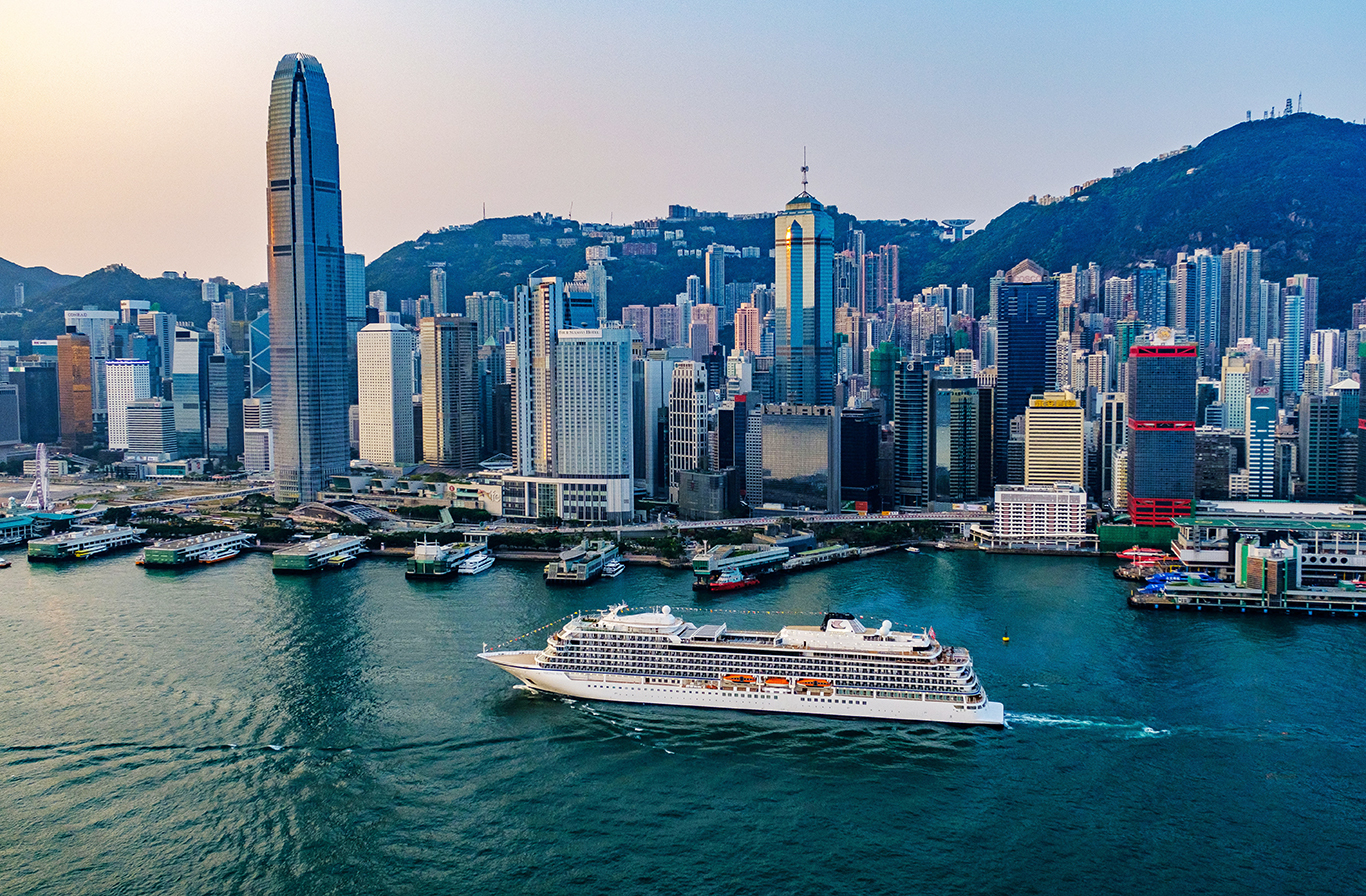 Cruise news / The Most Unforgettable World Cruises to Book for 2021

The Most Unforgettable World Cruises to Book for 2021

Paradise islands, Arctic adventures and glittering global cities are all yours to discover on the greatest cruise of all

Cunard pioneered the concept of world cruising in 1922, and almost a century later, the romanticism of journeying to the furthest reaches of the earth by sea shows no sign of waning.

While a world cruise needn’t necessarily circle the entire globe, it will visit more countries than most people see in a whole lifetime, stopping along the way to explore great cities, tropical islands and ancient wonders – which is why last year an estimated 81,000 Brits set off on globetrotting voyages of discovery.

If you fancy taking the plunge and taking a world cruise, you can whizz round the globe in as little 99 days or take the slow boat for eight months. You can spend less than £10,000 or more than £100,000.

And if you need any further persuasion, remember that quite a few world cruises are round-trip from the UK, so there’s no need to fly, and the majority set sail in January, so you miss the grey British winter and get home with a golden tan, just in time for spring. Here’s our guide to the most amazing world cruises on offer.

Amazingly, the oldest (and some would say the grandest) line in the world cruising business also offers great value for money. Deliver yourself into the capable, white-gloved hands of Cunard, which has undertaken more global voyages than any other passenger line, and you can see the world for just £9,999. And there’s no penny-pinching on the route. This 99-night, east-west itinerary follows in the wake of Britain’s great Victorian empire-builders, from South Africa to Australia and southeast Asia, returning home via the Middle East and Europe. Empty those memory cards for visits to some 30 UNESCO-listed gems, including Pompeii, Israel’s Hanging Gardens of Haifa and Robben Island, South Africa’s poignant prison islet. Oh, and pack some dancing shoes – this 2,691-passenger flagship of the Cunard fleet has the largest ballroom at sea.

This all-singing, all-dancing ocean odyssey hits all the right notes. After chasing the Caribbean sun in January and transiting the Panama Canal, passengers can dive into world-class aquatic playgrounds such as New Zealand’s Bay of Islands, Australia’s Great Barrier Reef and the dramatic stone outcrops of Palawan in the Philippines. Then come the magical mysteries of southeast Asia, before the final leg powers through the Suez Canal (aka the world’s greatest shortcut) to call at historic Valletta and Moorish Cadiz. What’s more, like its friendly rival Cunard, P&O sails from Southampton and delivers you safely back home to Blighty, so you don’t even have to think about flying.

Best for…The trip of a lifetime

From Egypt’s Valley of the Kings to the great wine chateaux of France, this 140-day voyage delivers the historic and the indulgent in equal parts. Full of eastern promise, its 12-day Japanese leg takes in Tokyo – the world’s most Michelin-starred city – and Kagoshima, famed for its warrior history. You’ll stay overnight in 17 cities, including Beijing and Brisbane, and visit paradise islands like Vanuatu, straight out of a Paul Gauguin painting. Meanwhile, back in the super-luxe surroundings of Crystal Serenity, wine-lovers can explore a head-spinning 10,000-bottle list, foodies can enjoy Nobu’s only oceangoing restaurant, and bookworms can feast on an 8,000-volume library. Could there be a finer way to see the world in style?

Regent’s reimagined all-suite Seven Seas Mariner is your intimate floating home for this grand 117-night voyage, journeying from the mystical moai statues of Easter Island to the idyllic landscapes of Tuscany. Setting sail from the sun-kissed Caribbean, the ultra-luxury 700-guest ship transits the Panama Canal and heads out across the Pacific to the Antipodes, where cruisers spend nearly a month before exploring southeast Asia and finally turning for home via Mediterranean jewels such as Santorini and Monte Carlo. Onshore dining venues include a former prison yard once known as Australia’s Alcatraz, and the amazing desert landscapes of Wadi Rum in Jordan – and as you’d expect from the most all-inclusive of the top-end lines, these are all complimentary.
Back on board, you can take part in a hands-on culinary class or simply spoil yourself at the ship’s Canyon Ranch spa and Parisian fine dining restaurant, Chartreuse.

You’ll clock up 32,800 nautical miles and cross the equator not once but twice on this epic voyage aboard the 2,000-guest Sea Princess. Sailing north from Australia via the Middle East, then on to the Mediterranean and westwards across the Atlantic to Canada, this itinerary is peppered with unusual ports of call, from the mountainous Italian island of Elba – once the place of exile for Napoleon Bonaparte – to the Greenlandic capital, Nuuk, and Canada’s Red Bay, once a major whaling port. Life on board is packed with excitement, too, thanks to Broadway-style shows, a pool deck that turns into a giant night-time cinema, and a roster of on-board explorers, authors and athletes to host the line’s popular ‘Encounters With Discovery’ speaker series.

108-night ‘2021 World Cruise’ aboard Sea Princess, round trip from Sydney via Indonesia, Singapore, Sri Lanka, the Middle East and the Suez Canal, the Mediterranean, the British Isles, Iceland, Greenland, Canada, North and South America and the South Pacific, from £14,779, departing 3 June 2021, princess.com

Oceania Cruises
‘Around the World in 180 Days’

Circumnavigating the globe from Miami to New York City, Oceania offers a voyage of discovery for true adventurers, encompassing six continents and 100 ports in 44 countries. Carrying just 698 passengers, Oceania Insignia will visit an impressive 124 UNESCO World Heritage Sites, ticking off rarely cruised destinations such as Corinto in Nicaragua, Ensenada in Mexico, Hawaii’s Nawiliwili and Pago Pago in American Samoa. With more offbeat destinations come more unusual wildlife sightings, including proboscis monkeys in Borneo and the terrifying Komodo dragons of Indonesia. But the real highlight of this incredible cruise? Buckets of overnight stays, from three days each in Yangon and Istanbul, to overnights in Cairns, Saigon, Mumbai and Luxor. Back on board, you can take stock of the wonders you’ve seen in the scenic Horizons Bar and prepare for more amazing encounters with a pampering session in the blissfully relaxing Canyon Ranch Spa.

180-night ‘Around the World in 180 Days’ cruise aboard Insignia, from Miami to New York via Central America, the South Pacific, Australasia, southeast Asia, India, the Middle East, the Mediterranean and northern Europe, from £34,999, departing 9 January 2021, oceaniacruises.com

From birdwatching in the Pacific Marshall Islands to sloth-spotting in Costa Rica’s Manuel Antonio National Park, this nature-packed itinerary from one of the biggest names in cruising has it all. A highlight of this round trip from Florida aboard Amsterdam is spending a week exploring the amazing biodiversity of the Amazon, looking out for pink river dolphins, translucent glass frogs and spectacularly colourful birdlife. The voyage also ticks off ancient wonders including the stone city of Petra and the Great Wall of China, as well as six ports in Japan and less-visited regions of the UAE, such as Oman’s subtropical Salalah.

128-night ‘Grand World Voyage’ aboard Amsterdam, round trip from Fort Lauderdale via the Caribbean, South and Central America, the Far East, the Middle East and the Mediterranean, from £19,399, departing 4 January 2021, hollandamerica.com

Circling the globe for 119 days should be enough to put you in touch with your inner Attenborough on this hugely tempting nature-rich itinerary. When you’re not scaling Vietnam’s Marble Mountains you’ll be snorkelling in Jordan’s Aqaba Marine Park, encountering nesting turtles in Penang or cuddling cute marsupials at a koala sanctuary in Australia. And MSC Poesia being a Swiss-owned ship, the on-board amenities and entertainment run like clockwork, from the Broadway-style theatre shows to the poolside cinema and huge Aurea Spa.

118-night ‘World Cruise 2021’ aboard MSC Poesia, round trip from Genoa via the Caribbean, Central America, California, the South Pacific, Australasia, the Far East, the Middle East and the Mediterranean, departing 5 January 2021, from £12,499, msccruises.co.uk

Living up to its title, this first-of-a-kind voyage ventures to extreme latitudes, yet to be explored on any world cruise. Casting off from the southernmost tip of South America, guests will cross the notorious Drake Passage aboard Silversea’s ice-class expedition ship, Silver Cloud, before exploring Antarctica with scientist and author Felicity Aston MBE – the first woman to cross the White Continent solo. The intrepid itinerary continues with many more exceptional experiences, such as swimming with rays in Bora Bora, and a behind-the-scenes tour of the ancient Egyptian temples of Luxor. Silversea also pushes the culinary envelope, laying on private dinners in Iceland’s Kjarnaskogur Forest and at Treasure Island writer Robert Louis Stevenson’s former home in Samoa.

166-night ‘The Uncharted World Tour’ aboard Silver Cloud, from Ushuaia to Tromso via Antarctica, South America, the South Pacific, Australasia, the Far East, the Middle East, the Mediterranean and the Arctic Circle, departing 30 January 2021, from £104,000, silversea.com

Checking off 60 ports in 32 countries across six continents in 140 days is no mean feat, but this east-to-west trip pulls it off in style. Seabourn raises the adventure bar, too, with stargazing desert tours in Namibia, a Big Five safari in the Serengeti and snorkelling with wild bottlenose dolphins in Western Australia. After sailing via the Panama Canal and the South Pacific to Australasia, you’ll pull into some of West Africa’s less touristed spots, such as Benin – the birthplace of voodoo – and Togo, an animal-lover’s paradise. You’ll also have blissful beaches in Bali and the Seychelles to relax on – not to mention a truly huge split-level spa on your mega-yacht home, which boasts the first Kneipp hydrotherapy pool at sea.

No matter how much fun you’re having, there comes a time on every world cruise when you start to miss your home comforts. Essex-based CMV understands that very well, and on its adults-only MV Columbus you’ll find a kettle in your cabin and brown sauce on the breakfast table. The onboard atmosphere may be reassuringly British but the itinerary is world-class, and during your four-month voyage you’ll soak up 600 years of history in Malacca, enjoy a safari in Kenya’s Tsavo National Park, and squeeze in a trio of great global cities – Rio, Sydney and Cape Town. Finally nosing her way back home via the Med, Columbus also ticks off beautiful Mindelo in Cape Verde, alluring Casablanca and the great seafaring city of Lisbon.

120-night ‘Grand Round The World Cruise’ aboard Columbus, round trip from London Tilbury via the Azores, the Caribbean, the Panama Canal, French Polynesia, Australasia, the Far East, Africa and South America, departing 6 January 2021, from £17,999, cruiseandmaritime.com

Fred Olsen
‘Around the World Cruise’

While it can also be relied upon for those little touches that remind you of home, Suffolk-based Fred Olsen will take you far away to the volcanic landscapes of Fiji, time-warped Old Havana and buzzing 21st-century Mumbai. Foodies can indulge in whisky and cheese tastings or visit world-famous wine cellars, while outdoorsy cruisers can look forward to wildlife-rich Costa Rica and the underwater canyons of Indonesia’s Weh Island. Craving some European-style culture? Explore Surabaya’s Amsterdam-esque canals in Java, Melbourne’s grand boulevards and French Polynesia’s very own Notre Dame on Papeete. As for Black Watch, this much-loved ship was treated to a multi million-pound makeover in 2016, so all 423 cabins are gleaming. Make a dent in your £600 onboard spend at the Observatory Lounge and don those glad-rags for an evening of cabaret entertainment.

108-night ‘Around the World’ cruise aboard Black Watch, round trip from Southampton via Europe, the Caribbean, Central America, the South Pacific, Australia, Asia and the Middle East, departing 8 January 2021, from £12,199, fredolsencruises.com