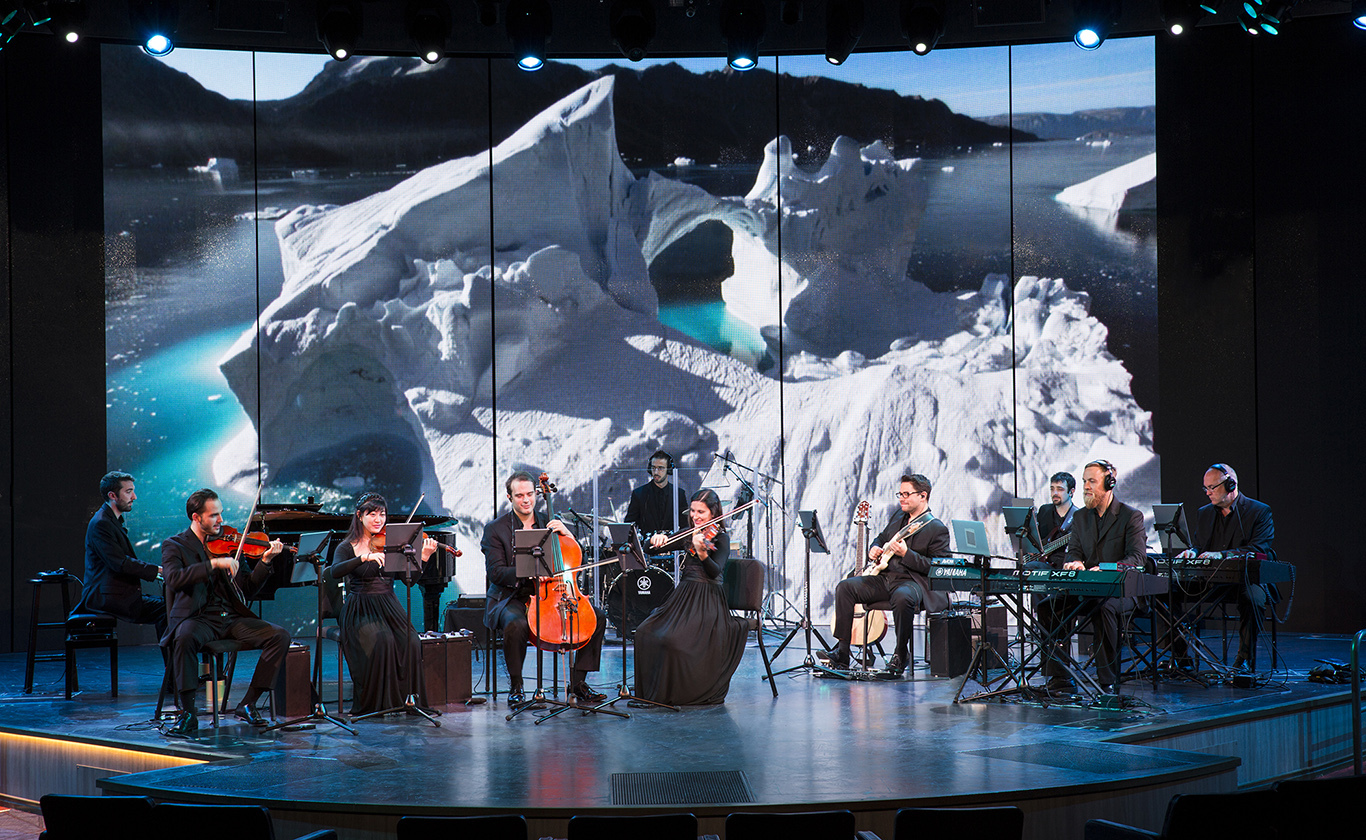 A love-struck sloth swims across the mangroves to find his mate, but he is not alone, he’s accompanied by three violins.

A flamingo corps de ballet strut in time with a piano while a drummer’s beat builds suspense as a giraffe kicks out to escape hungry lions and young iguanas dramatically flee a nest of snakes.

When a silent barn owl looms over a harvest mouse, tight-roping across tall grasses to find food for its young, keyboards and guitar deliver rhythmic tension and eventual calm when the tiny creature makes it home safely to its cute ball-shaped nest.

Where in the world are we? In the Vista Theatre, on Holland America Line’s ms Zuiderdam, experiencing an immersive combination of Planet Earth II films and a 10-piece orchestra playing new, enthralling scores by composers Hans Zimmer, Jasha Klebe and Jacob Shea.

The music takes viewers through the highs and lows, drama and joy of the natural world, adding greater magic to the eye-to-eye footage of animals from a rainforest canopy in Madagascar to the suburbs of Delhi in India – a unique journey through the splendour of our earth.

The Planet Earth II shows with a live orchestra are played out twice during every cruise on ms Zuiderdam and the concept is being rolled out across more Holland America Line ships, including flagship ms Koningsdam, during 2018-2019.

In parallel with the extraordinary Planet Earth II footage, Holland America Line’s passengers are being given an even greater opportunity to explore the world’s finest landscapes and watch for wildlife.

Eight new zodiacs have been added to ms Maasdam’s arsenal – the fleet’s smallest ship – also has eight new bespoke itineraries, taking passengers to exciting destinations where they can see wildlife at eye level.

The EXC In-Depth Voyages feature some of the most fascinating corners of the globe on 12 to 34-day itineraries using world-renowned experts, local guides and customised zodiac tours. Many destinations will be new to Holland America Line.

Each sailing offers guests a variety of themes and choices to tailor their exploration from photography and nature as well as history and architecture.

The first EXC In-Depth Voyage departs on September 10, 2018 and 1,258-passenger ms Maasdam sets sail for Papeete and Tahiti via the Panama Canal. The ship calls into ports on the west coast of South America, sails across the Pacific Ocean to Easter Island and visits several South Pacific islands during the 34-day voyage.

In October and part of November, ms Maasdam cruises in the South Pacific before heading to New Zealand. In December, she sails along the southern coast of Australia, featuring a 16-day Christmas cruise departing December 21.

January features cruising the northwest coast of Australia to Singapore and on January 26, 2019 the ship embarks on a 20-day adventure in the culturally rich Indian Ocean region.

The ship explores the Spice Islands and ports along the northeastern coast of Australia In February 2019, before sailing back to the South Pacific. The final EXC In-Depth cruise in the series is a 24-day Polynesian Crossing ending in San Francisco, California, on May 7, 2019.

Orlando Ashford, president of Holland America Line, said: “We have created EXC In-Depth Voyages to further enhance our guests’ immersion experience in a more personalised way with a series of specially designed itineraries in exotic destinations.

“The addition of zodiac tours will allow guests to be modern-day explorers, and Maasdam will visit many ports that we have never been to or haven’t visited in years.”