Jools Holland Interview: From Hootenanny to the High Seas

On his way from Hootenanny to the high seas, Jools Holland invites you to join him on a new cruise musical adventure

Every New Year, as Big Ben chimes out across the nation, we can rely on Jools Holland to lead the celebrations with his famous Hootenanny on the BBC. His guest list over the years reads like a Who’s Who of musical legends, from David Bowie to ZZ Top, but Jools is also famed for championing new artists who go on to enjoy stellar careers of their own.

What’s more, all the acts perform live – both on Hootenanny and on his chat show Later… with Jools Holland – accompanied by the man himself in his trademark boogie-woogie piano style.

Now Jools is flexing his fingers in readiness for two special cruises aboard Saga’s brand new Spirit of Discovery, which launches next month. As the face of The Club by Jools – a stylish new venue where he’ll perform live with his band and special guests – Jools will join the ship in August for a gourmet cruise to Spain, and he’ll be back on board later in the month as Spirit of Discovery turns north to explore Scandinavia and the beauties of the Baltic.

“It will be my first time on a big cruise,’ says Jools, 61, “and although I have been to several of the cities we’re visiting before, it will be wonderful to arrive by sea, seeing them unfold as ancient travellers did, discovering places with fresh eyes. It offers a completely new outlook when you arrive by ship.”

Along with his 10-piece band, Jools will be joined by the singer Ruby Turner, who he rates as one of the greatest blues and gospel voices ever (“When you hear her voice,” he says, “you are going back to the roots of what that music was all about”). Also on board will be singers Mabel Ray and Louise Marshall, plus drummer Gilson Lavis, a bandmate from the glory days of 70s New Wave act Squeeze.

“Hearing bands on big stages in huge venues is a real experience,” says Jools, “but there’s something magical about seeing musicians in a more intimate setting. When you’re up close, you come away with a real understanding of what each artist is about.”

And that’s exactly what visitors to The Club on Spirit of Discovery can look forward to. Designed to look like a classic 1950s cabaret venue, it’s an elegant space with wood panelling, velvet seats and – of course – a grand piano for Jools.

Julian Miles Holland has come a long way since his early days in Deptford, southeast London, where he taught himself to play the piano and found work as a session musician. His breakthrough came with Squeeze – whose hits included Cool for Cats and Up the Junction – and he launched his TV career with irreverent music show, The Tube, in the first week of Channel 4. 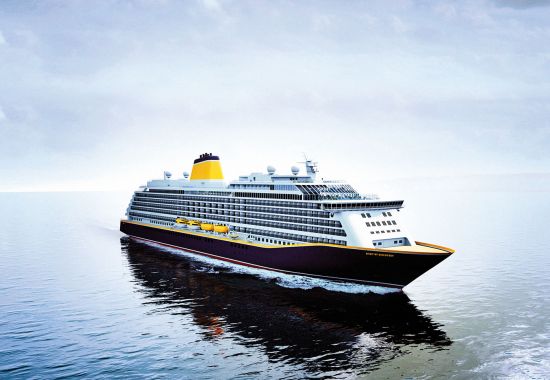 In the public eye ever since, as a musician, presenter, and leader of his own Rhythm & Blues Orchestra, Jools was awarded the OBE in 2003 for his services to the British music industry. Over the years he’s played with some of the greatest names in the business, so which acts would he most love to share a billing with?

“I was very lucky to have performed with BB King,’ he says, “and I would love to have seen how JS Bach played his own music. And then of course it would have been good to perform with The Beatles. And that’s just the letter B!”

That particular concert will have to remain a dream, but Jools still has some fabulous musical treats in store. Following Spirit of Discovery’s debut season this year, he’ll be back on board with his band for three more cruises in 2020, visiting Spain in March, France in July and the Baltics in August.

“Music will always lift you up and take you to a special place,” he says. “In a world that’s constantly changing, it’s nice that we can provide some certainty.”