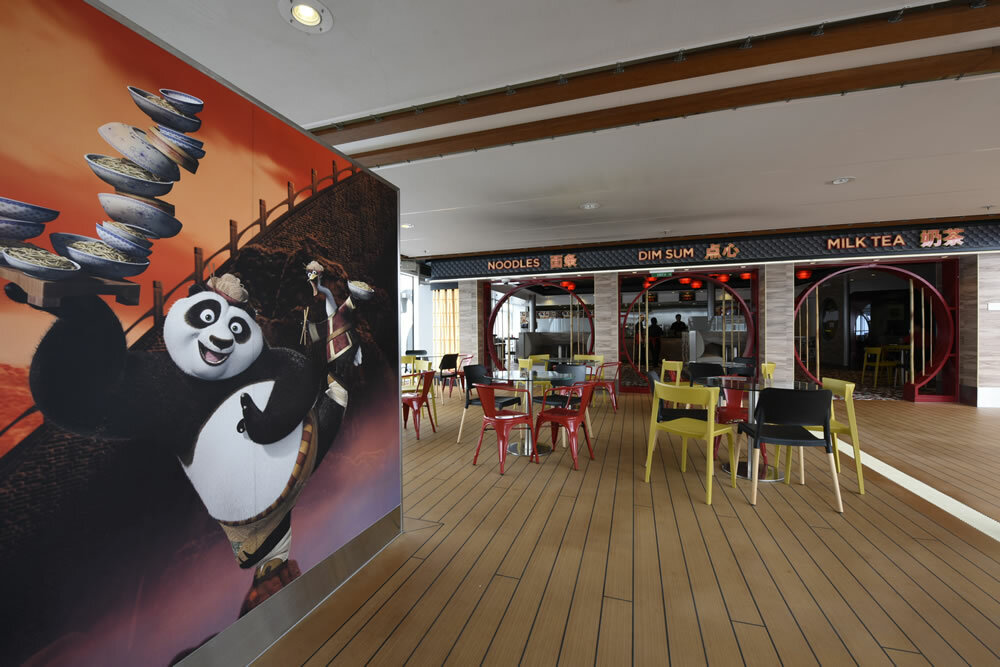 The Johnny Rockets concept on-board Quantum-class ships had been augmented from the 50’s style diner concept found on other Royal Caribbean ships. Instead of sit-in, all-you-can-eat diner with a cover charge of $5.95 (£3.80) per person, it became a fast-food takeaway à la carte restaurant, losing its fundamental charm.

Soon after the vessel’s move to Shanghai Royal Caribbean has now removed the Johnny Rockets outlet on Deck 14 and replaced it with ‘Kung Fu Panda Noodle Shop’, a new family-style, à la carte eatery. This has become the first-ever DreamWorks Animation Kung Fu Panda-themed restaurant on land or at sea.

The dishes on offer include four-piece dim sum, savoury noodle bowls, such as Taiwanese spicy beef noodles, and traditional Chinese desserts including sesame balls and custard tarts. Dishes are each priced between $2 (£1.30) and $5 (£3.20). Character interactions are also available with Po and the Furious Five posing for photographs.

John Suley, Vice President of Food and Beverage at Royal Caribbean International, said: “We’re very excited to continue building on our relationship with DreamWorks Animation and offer our guests new dining experiences on-board Quantum of the Seas as she débuts in her new home in China,” said . “A creative collaboration amongst our team of chefs to create the menu for our Kung Fu Panda Noodle Shop is another example of how we continue to ensure that our on-board options reflect what today’s food conscious traveller and our Chinese guests expect from their holiday.”

Royal Caribbean has made a significant number of changes this year to concepts introduced by the Quantum-class ships. To combat dining queues the cruise line had to lift the cover charge from Devinly Decadence, initially a speciality restaurant, to provide additional capacity for diners not willing to pay a premium for their meals. Last month the line had to switch from à la carte pricing back to cover charge pricing at Jamie’s Italian on-board Anthem of the Seas to attract more guests. In February the line had to adapt their much-hyped Dynamic Dining concept on-board the Quantum-class ships to offer a Classic rotational dining option for guests who preferred a more traditional dining room experience. Then, following months of delays, earlier this month the cruise line finally abandoned the roll-out of their Dynamic Dining concept to older vessels in the fleet.