Oslo City Guide: Top 10 Things to See and Do

Nobody, it’s safe to say, would put Oslo on a list of bargain city breaks. And the reason it’ll cost you an arm and a leg for a reindeer steak and a glass of ale? Quite simply, the Norwegians can afford it. Thanks to the bounty of North Sea oil – and some very canny management – their government is sitting on huge cash reserves, currently estimated at around $1 trillion.

While this wealth has been reflected in the city’s sky-high Scandi prices, if you’re just passing through on a Baltic cruise, you won’t be there long enough for those to bother you. What you will notice – straight away – is how smart, clean, modern and well-run everything is. Add in the country’s fascinating culture, delicious food and world-class shopping – all wrapped up in comforting Nordic hygge – and you begin to understand Oslo’s allure.

If you’re a history buff, you’ll know this was the land of the Vikings, and those fearsome marauders still make their presence felt all over the city, looming large in many of its best attractions. From art and history to music and culture, here’s are the top ten things to see and do in Oslo.

You can’t visit Oslo without awakening your inner Viking, so sail your battle fleet to the Viking Ship Museum and marvel at the skill and bravery it took to navigate these slender vessels across the Atlantic to Greenland and beyond. You’ll also see spectacular treasures from Viking graves, and there’s a film to explain the lives of these extraordinary folk from more than a millennium ago.

Oslo’s temple of culture is home to the most famous painting by Norway’s greatest artist. But there’s more to the National Art Gallery than Edvard Munch’s The Scream. Plenty of other fine works, including Old Masters and a sprinkling of Monets, Cezannes and Picassos, make this an excellent place to spend the afternoon – especially when the Nordic weather turns chilly. 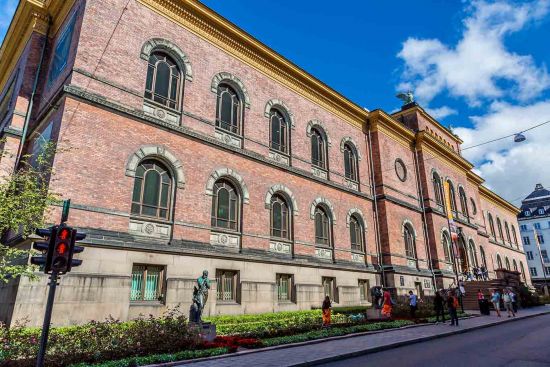 A Modernist vision of glass and white marble, the home of Norway’s national ballet and opera companies became a star attraction the moment it opened in 2008. Set on the shores of Oslofjord, its standout feature is a canopy that swoops down to ground level, so you can literally walk on the roof. There are welcoming cafés inside and it’s well worth a visit, even if you don’t have time to catch a performance.

Norway’s pioneering spirit didn’t die with the Vikings. The country is famous for its polar explorers, and the greatest of them – Fridtjof Nansen, Otto Sverdrup and Roald Amundsen – all sailed on the Fram, a specially built three-masted schooner. Launched in 1892, the little ship survived all that the polar ice could throw at her – and the less intrepid among us can now explore her decks at leisure in a dedicated museum.

Norway’s royal family are surprisingly down-to-earth (spotting one of them strolling round the city centre is not unknown), but that doesn’t mean you can wander into their home. Fortunately, the exterior of the royal palace makes an excellent photo opportunity in itself.

The life’s work of Norwegian artist Gustav Vigeland (1869-1943), this gorgeous green space just outside central Oslo is home to more than 200 huge sculptures in bronze, granite and cast iron. Open all year round, the park is a hugely popular attraction – and not just because it’s free.

It might not be the easiest attraction to pronounce, but the sight of it is enough to leave you speechless. An Olympic ski jump, Holmenkollbakken stands a giddying 64m tall. You can zipline down it if you’re feeling brave – but most will content themselves with a snap.

There’s often something fishy going on with Norwegian cuisine, and you simply have to try the local smoked salmon (røkt laks) or the better-known gravlax. Want a treat? Visit Restaurant Kontrast – featured in Richard Ayoade’s Travel Man on Channel 4 – where the ten-course taster menu is out of this world (as are the prices). If you’re on the lookout for something more reasonable, get down to the Aker Brygge area, where there is plenty of harbourside dining to be enjoyed.

A beautiful place to visit in the spring and summer months, Frogner Park is not just home to the Sculpture Park, but also Norway’s biggest collection of roses. Horticultural enthusiasts can marvel at a total of 14,000 plants of 150 different species, while children can enjoy the open-air pool.

This is the city’s main shopping drag, with a good mix of international high-street favourites and Norwegian boutiques. For a little more edge, head to the hipster haven of Grünerløkka, which is packed full of galleries, café bars and charming little independent shops.