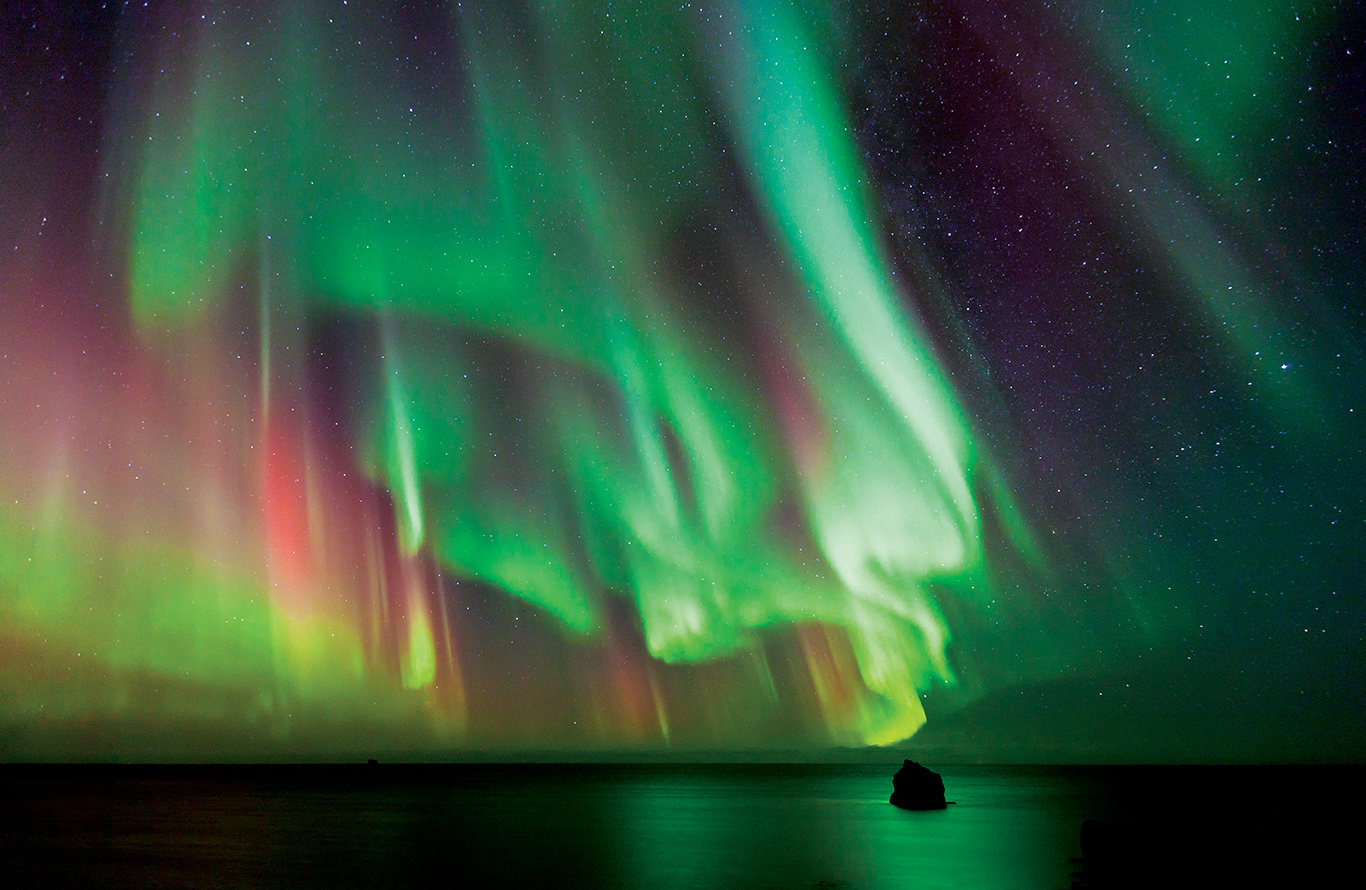 Northern Lights Cruise: The Ultimate Way to Experience this Wonder

The Northern Lights maintain every bit of their mystique and wonder, as Louise Rodden found out on an Arctic cruise

When I saw that our excursion was called ‘Hunting the Northern Lights’, I felt a flicker of excitement. But then I latched on to the key word, hunting. Ok, I thought, it’s all right for scientists and TV crews – they can afford to wait around for these incredible Arctic sky displays. But we cruisers can do is hope, on a northern lights cruise.

That’s how I came to be out of doors on a dark, snowy night in Langfjordbotn, a remote spot in Norway’s frozen north. It was minus 16C, my toes were numb, my nose felt so icy I feared it might snap clean off, and the sighting forecast from our ship, Saga Pearl II, had not been encouraging.

So far, so predictable. But then it happened. The absolute highlight of the northern lights cruise.

The sky erupted into glowing ribbons of green, looping and swelling, then dipping earthwards before vanishing into blackness. Next, a blush of red suffused the dark. And then again there was nothing – just inky sky and a biting wind.

I’ll be honest – I was desperate for the loo by this point, but the northern lights are so famously fleeting that I didn’t dare move – and patience paid off. Towards the horizon, beams of jade green and light rose fell in slow-motion, and in the midst of this ethereal dance shone a dazzling solitary star. It was a true wow moment – and a surprise even for our guide.

A local expert and expedition leader, he had boarded the ship that afternoon to give us the science behind the aurora borealis, and to offer photography advice. If you only have a smartphone or iPad, don’t bother.

So now just a few tried to capture these celestial lights, high-tech cameras fixed to tripods. Most faces were turned skywards. And everyone was smiling. We were extra lucky because Saga provides smart red polar jackets to offset the bone-chilling cold (guests even get to take them home), as well as ice-defying boot spikes.

Even better, we had camp fires and a hot-chocolate urn set up in a traditional lavvu tent. A teepee-like shelter used by the north Scandinavian Sami people. This inclusive excursion was easily the highlight of my northern lights voyage aboard Saga Pearl II, and although I’d joined just a segment of the 15-night trip, I definitely felt blessed.

For my fellow cruisers, this adventure had also included trips to Bergen and Molde before the ship crossed the Arctic Circle.

For me, however, my northern lights cruise begun in Tromso – effectively the capital of northern Norway, a likeable little city with a stunning cathedral whose outline echoes the encircling mountains. I watched this pointy silhouette recede as we set sail, heading even further north, and that night I fell asleep to rough seas, the ship rolling gently and the distant howl of Arctic winds melding with my dreams.

I woke next morning to an unforgettably barren landscape – vast sweeps of ice-tipped peaks, iron-grey seas and a snow-washed, lustrous sky. The ship’s navigation chart told me we were 70 degrees north, and smooth-voiced Captain Nick Sunderland relayed some daunting information over the tannoy: “It is minus 15 outside, but with a wind chill factor of minus 25, so wrap up well, ladies and gentlemen.”

Our next port of call was the town of Alta, where we spent two days – and we certainly made the most of them. Our visit coincided with Europe’s greatest dog sled race, the annual Finnmarkslopet, which is run over an astonishing 750 miles and five days, all the way from Alta to Kirkenes.

I wished we could have joined the festivities and cheered the 150-odd teams as they set off from town, but we had a canine adventure of our own to begin. What a greeting awaited us at Holmen husky lodge – yips, howls and a blur of wagging tails as 96 dogs scampered about, barking out the doggy equivalent of ‘Choose me!’

And then we were off, togged up in thick snow suits, two to a sled and with a blanket for extra warmth. Somehow I managed to lose mine, mesmerised by this race over silent tracks – the only sound being the soft crunch of snow beneath the sled.

White-blanketed fir trees slipped by, and then we were speeding along the frozen Alta River, famous for its giant salmon. Occasionally there were bone-jolting bumps on the track but mostly it was smooth – and amazingly fast. For one octogenarian guest this sled ride added a big tick to her bucket list, and she had tears in her eyes as I helped her out of her snowsuit.”Oh, I forgot,’ she said. ‘It’s my birthday today!”

More treats lay in store – especially a visit to the world’s northernmost ice hotel. With 32 bedrooms and a reception area decorated with Viking-themed ice sculptures, it had us all enraptured – especially when we found our way into the Ice Bar, where tots of blue vodka in ice-block tumblers proved the perfect antidote to chilly bones.

Our Alta-based adventures concluded with a reindeer sled ride – a tad too gentle for me, now I was a husky veteran, but enjoyable even so because I had a sled to myself. As long golden shadows from the weak sun highlighted the pristine snowy expanses, I felt as pampered as a wealthy tsarina.

Pampering is very much a speciality aboard Saga Pearl II, and it will be a sad day when she sails her last voyage for the company. Among the 449 guests on my cruise were many repeat customers who love her relaxed, yacht-like environment, fabulous food and ever-obliging crew.

Even so, chatting in the snug Sundowner bar, I sensed palpable excitement about her new-build replacement, Spirit of Discovery. For now, however, we were content to revel in the moment.

Our sea days were crammed with activities: a memorable afternoon tea with miniature cakes and sandwiches; a facial from the spa manager, that rejuvenated my snow-ravaged skin. A gripping talk by former ITN reporter Sam Hall about the bombing of the German battleship Tirpitz, which was sunk in Tromso fjord by the RAF in 1944.

Evenings proved just as diverting: a cocktail or two in the Sundowner bar. Followed by an indulgent five-course dinner devised by chef Dirk Roessler, a wizard with seafood. The full menu is also served in the popular Verandah restaurant. If you prefer a sense of occasion, head to the Dining Room.

A post-dinner concert given by pianist and composer Dr Simon Fricker took us through the music of Gershwin and Novello, Richard Rodgers and Andrew Lloyd Webber, and he soon had many of the guests tapping their toes.

Mind you, if it’s dancing you fancy, head to either the Discovery Lounge or Shackleton’s. After so many adventures I should have been exhausted, but on our last evening I danced the night away to ABBA hits from the excellent resident vocal duo. But as for tripping the light fantastic, well, that we’d already done on this northern lights cruise.

Editor’s Note: This post was originally published January 2019 and has been updated for accuracy and comprehensiveness.