Vienna City Guide: What To See & Do In Austria’s Capital

Where to go, eat and see in Europe’s capital of culture, coffee and concert halls

With river cruises back on the agenda following the global suspension of sailings, one itinerary that is proving particularly popular is a Danube sailing, which typically calls at the Austrian capital, Vienna.

During the Classical Period, Vienna was home to Hadyn, Mozart, Beethoven and Schubert – earning it the moniker of ‘City of Music’. The Hofburg Palace in the centre of town stands as tribute to the Hapsburgs, who were one of the most powerful European dynasties in the 1600s.

There’s more to the place than imperial flair, though – Vienna boasts a thriving artisan coffee shop scene and recent years have seen a wave of new designers leading the city’s sartorial style. 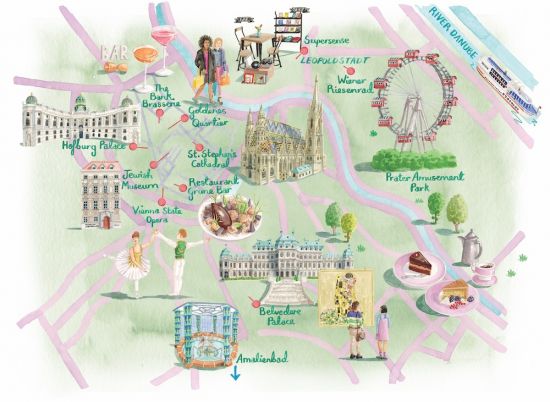 Consistently ranked as one of the most liveable cities in the world with its clean air and low crime rate, the fine capital caters to all tastes.

Sailing down the River Danube in style, travellers who are visiting on a cruise could stay for weeks and still not have time to sample everything this beautiful city has to offer.

Here’s a few off the bat to save you valuable time:

The glorious 65m tall Ferris wheel stands at the entrance of the Prater Amusement Park in Leopoldstadt and is one of the biggest tourist attractions in the city. The giant wheel is symbolic of the district and instantly recognisable – perfect for those who want to blow off a bit of steam with an afternoon on the rides.

If you get tired after a day of sightseeing, go and relax with an afternoon in this stylish 1920s-style pool and sauna. Designed by architects Otto Nagel and Karl Schmalhofer, the Amalienbad is one of the oldest indoor pools in the world and is renowned for its timeless Art Nouveau style.

With its statement multicoloured roof, this landmark religious building, dating back to the 12th century, has become one of the city’s most recognisable symbols. It is underneath the hallowed walls that holds the most interest, however; guided tours of the crypt and burial tombs are available. A mysterious labyrinth of underground corridors awaits the less squeamish traveller.

The famous painter’s final painting is on display at the beautiful Upper Belvedere Palace. Depicting two lovers embracing, some think it’s a representation of the artist himself with life-long partner Emily Froge.

The world’s first-ever museum entirely dedicated to Jewish history and religious practices, celebrating the crucial role the people had in shaping the culture of the city.

Where to grab a bite in Vienna

Located a two-minute walk from the Vienna State Opera building in the inner city, this institute of fine dining offers traditional Viennese food and menus which reflect the local’s passion for cuisine.

Now open for business post-lockdown, The Bank Brasserie is the place to go for an after-dinner tipple. Unique cocktails and brasserie classics are served in the historic setting of the former Am Hof. Just a few minutes’ walk from the river in the centre of town, this establishment is perfect for those looking for a stylish night on the town with friends – best to book in advance.

Halfway between museum and design boutique, Supersense is the most stylish one-stop design shop in the city. Referring to itself as the ‘Home of Analogue Delicacies’, it’s easy to see why. Give yourself an hour to delve into this treasure trove of antiques, hand-cut vinyls, working letterpresses and scent labs.

Found in the heart of Vienna’s old city, this new luxury shopping area is a fashion connoisseur’s dream, lined with high-end stores like Louis Vuitton, Armani, Prada and Saint Laurent. Splash out in one of the most exclusive shopping districts in the city.