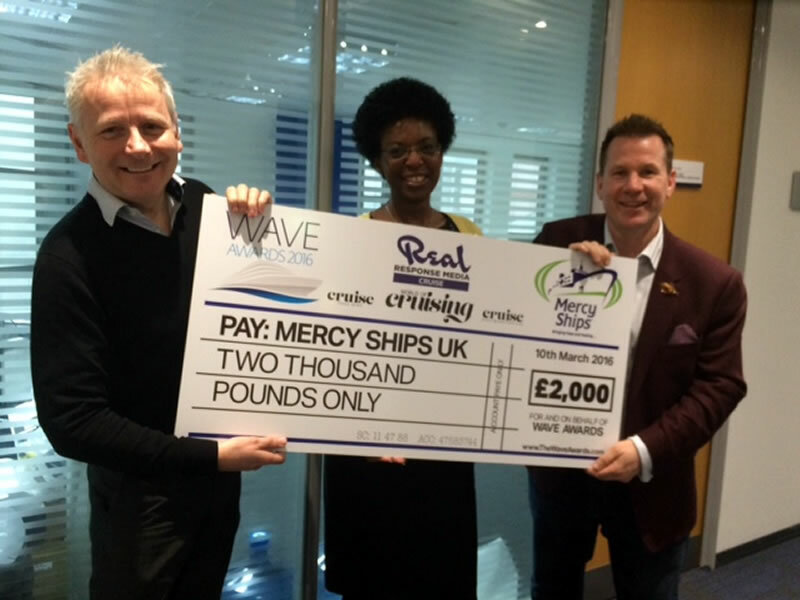 A total of £2,000 was raised at this year’s The Wave Awards for the charity Mercy Ships. Attendees to The Wave Awards ceremony last month at Royal Garden Hotel in Kensington, London, donated £1,550 as part of the charity raffle. Real Response Media topped up the donation to £2,000. Prizes that had been donated to

A total of £2,000 was raised at this year’s The Wave Awards for the charity Mercy Ships.

Attendees to The Wave Awards ceremony last month at Royal Garden Hotel in Kensington, London, donated £1,550 as part of the charity raffle. Real Response Media topped up the donation to £2,000.

Prizes that had been donated to the raffle included a week on Royal Caribbean International’s Harmony of the Seas and a half crate of champagne from Uniworld.

The charity raffle took place just prior to the awards ceremony and was followed by a set from comedian Jimmy McGhie. Jimmy was joined by television celebrity Gaby Roslin to host the inaugural awards presentation, revealing the winners across 29 categories with help from “the voice of the balls” Alan Dedicoat.

Sarah Balser, Head of Fundraising at Mercy Ships UK, said: “The Wave Awards was an amazing platform for Mercy Ships to highlight our work with the cruise industry as CLIA charity of choice. Chris Pitchford has been very generous to Mercy Ships, and we are extremely grateful for his support and the £2,000 donation received following the spectacular event.”

She added: “The funds raised on the night form a significant contribution to our work that will change the lives of men, women and children living in extreme poverty, and in need of critical surgery in Africa. Our floating hospital ship is currently docked in Madagascar and our extraordinary volunteer crew living and working on board are providing much needed hope and healing in the form of surgery and healthcare, free of charge, to the forgotten poor. They are delighted to hear about the success of the inaugural Wave Awards event and the support received from Real Response; and we all hope our relationship with Chris and the team continues long into the future.”

Mercy Ships is an international charity and was founded by Don and Deyon Stephens in 1978. They purchased a retired ocean liner called Victoria for £600,000 and spent four years transforming it into a hospital ship. The vessel was equipped with three operating theatres and a 40-bed ward. In 1982 the ship was christened Anastasis and carried a crew of 350 volunteers from all over the world.

In the charity’s history, their ships have visited more than 450 ports in developing nations around the world, most notably including Togo, Sierra Leone, Guinea, and the Republic of Congo.

Tony Blair, John Major, George W. Bush, Nelson Mandela, and Desmond Tutu are amongst the famous names that have praised the work of Mercy Ships.

The charity’s sole ship is currently the 16,500 ton Africa Mercy. Built in Denmark in 1980, the ship has been fitted with 82 patient beds and five operating theatres. It has a crew capacity of 474.

The hospital occupies most of the original rail deck and spans approximately 1,200 square-metres. It has been fitted with state-of-the-art equipment that includes a CT scanner as well as X-ray, laboratory services and a Nikon Coolscope to aid accurate diagnoses.