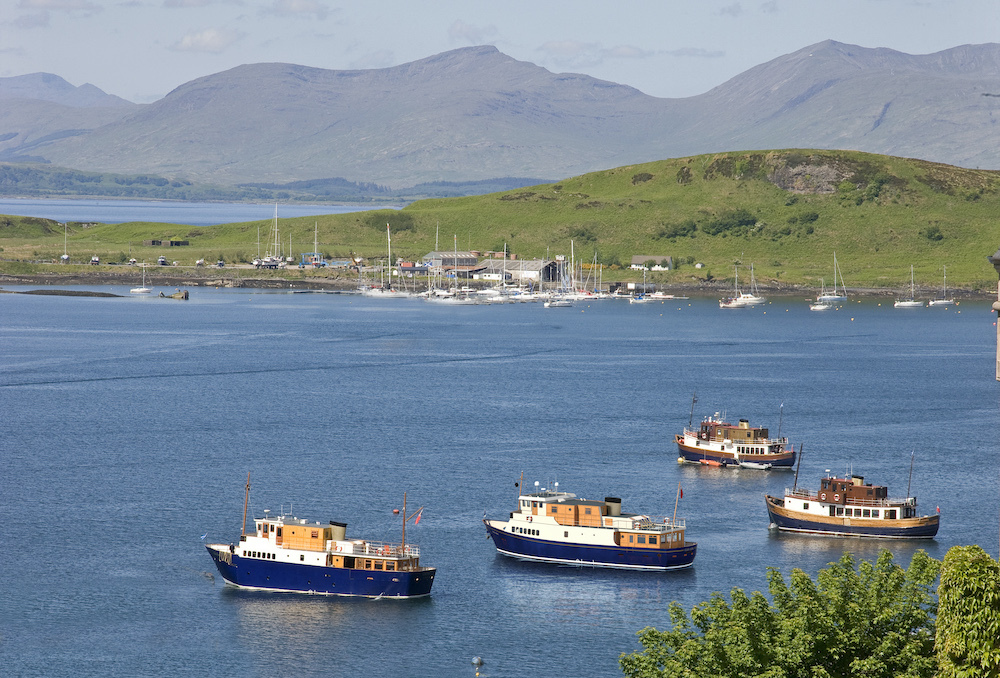 Cruise news / A Socially-Distanced Cruise In Scotland On The Majestic Line&#8217;s Glen Shiel

The only things not socially distancing were the dolphins…

Checking in for our cruise was, to say the least, informal. “You’ll be David and Amanda,” the captain said as he ticked off our names on a clipboard before holding up a plastic gun to check our temperatures.

That was it – no passport checks, security scans, keycards, documents, queues or even a terminal. We had simply given our luggage to the crew and walked along the pontoon at Oban to our boat, Glen Shiel.

After climbing the four steps on board we were greeted by The Majestic Line’s managing director, Ken Grant, who by great fortune also happens to be an epidemiologist of 25 years’ experience. The first post-lockdown cruise on Glen Shiel – a private charter – had been a success, he assured us, and the other operating boat, Glen Etive, was also on its second cruise.

As the engines fired up and Oban drifted into the distance, the circular folly perched on its hill like a stone crown, we and the seven other passengers began to acclimatise to cruising in the world changed by Covid, where most major lines are still laid up and only a few ocean ships are sailing in Europe.

Over the next six nights, we would bond closer together while staying physically apart. The nearest we got to each other was gathering around the large table for meals but, with the three couples naturally sitting in pairs, we and the three single travellers were able to maintain an invisible metre barrier between each household.

Elsewhere on the 80ft ship, we sat in carefully arranged chairs in the lounge, walked around deck or relaxed in our cabins. The only time we and the four crew were required to wear face masks was when taking the tender ashore – the maximum number of guests on each transfer was six – and when entering shops on land.

We washed our hands and used the sanitiser even more than on a normal cruise. Our temperatures were checked daily. As a group of sixty-somethings, we had all been careful during lockdown and felt confident to do what was right to protect ourselves and others.

Our voyage was titled Mull and its islands and inlets. There was no itinerary as such, just a map dotted with places where we might go, in any order, depending on the fickle Scottish weather. It was left to our captain, Neil White, to decide day by day where to travel and how long to stay there, on the one proviso that he got us back to Oban by the Friday.

We lucked out with a sunny first day, a Sunday, waking up to sunshine and a mirror-like Loch Spelve, silent but for the odd bird cry.

On the way to Iona, with its abbey, nunnery and white-sand beaches, we were joined by a playful pod of at least five dolphins which raced right alongside the starboard bow, occasionally leaping from the water as if to show us the way.

With the fine weather holding, we decided to tick off another highlight and head to Staffa to sail the tender into Fingal’s Cave, where Jane McDonald famously broke into song while on another The Majestic Line ship for her Channel 5 cruise series.

Cruising in Scotland in autumn means the sky is a constant battle between blue sunshine and dark rain clouds, often locked in an uneasy stand-off. It can go from summer to winter and back again in minutes, forcing you to juggle between donning sunglasses and pulling on plastic hoods.

The next day was rainy so Neil set sail for Mull’s capital of Tobermory on the other side of the island – the only remotely urban place we visited during the whole cruise.

We were warned of bouncy seas on the first half-hour of the journey so we all bunkered down with seasickness pills and acupuncture wristbands, just to be safe.

When the waves began to ease a little, I ventured up the single flight of stairs to the top deck, almost expecting to find a figure in a sou’wester desperately fighting with a huge wheel while being drenched in spray. Instead, Neil was sitting calmly in the wheelhouse, hands by his side, occasionally nudging the autopilot to adjust its course as the bow of the ship bobbed ahead of him.

Tobermory, a postcard-pretty town that featured in the BBC children’s TV series Balamory, is not best seen in the rain and many of the shops were up to their allocated Covid limits of two or three customers, so we strode around the bay and back again before returning by tender to the ship past a thunderous waterfall and warming up on board with a dram of the local distillery’s whisky.

Majestic is the 30th cruise line I’ve sailed on and it’s different from every other one. For a start, you are allowed to refer to its vessels as boats without sharp intakes of breath and indignant shakes of the head from experienced cruisers.

There is no casino, spa, pool, theatre – actually no entertainment of any kind. The cabins have no keys – there’s not even a lock – and no television. In fact, the generator is turned off around 9.30 at night (lights and other vital functions run on batteries) and isn’t switched on again until 7.30 in the morning, ready for the kettle to go on and guests to prepare for breakfast. So phones and anything else that needs charging have to be plugged in during the day.

Our cabin was on the main deck, three steps from the lounge at one end and 10 from the dining room at the other. The other guests’ rooms were on the deck below.

Ken Grant, who we met when we boarded, and Andy Thoms set up the company in 2004, naming it after a fictional line in the Scottish TV series Para Handy where a sacked engineer boasts to his former captain about being offered a new job by the imaginary The Majestic Line ‘with its funnels made of gold’. Hence, the gold-painted funnels on The Majestic Line ships.

You never go hungry on Glen Shiel. After breakfast, we were offered elevenses – tea and a biscuit – before lunch, of something like a jacket potato or gnocchi. There was tea and cake in the afternoon then nibbles and dinner, at around 7.30pm – a wonderfully presented and delicious dish of seafood or meat, followed by a dessert or cheese, cooked by our personal chef, Moll Scanlon.

The ship tends to anchor for meals but in between it sails into lochs, round headlands and to islands, offering the chance to tender ashore in an open metal boat with a landing craft-style bow for beach landings, if necessary. But, weather being as it is, there is plenty of time to simply relax with a good book in the lounge, make new friends or try one of the many malts or gins on display in the small bar.

Cabins are comfortable but basic with bedside cabinets, a tall but narrow wardrobe and room for three cases under the bed. Each room is en-suite – that might not be surprising for a cruise ship unless you have sailed with other small Scottish lines – and I was reassured to find a powerful shower.

Our second half of the week was spent exploring lochs and trips to Glen Coe and Duart Castle, home of the Maclean clan.

When I sailed on the biggest cruise ship in the world – then Oasis of the Seas back in 2009 – I praised its many features but said it wasn’t for everyone. Nor, of course, at the other end of the scale, is Glen Shiel.

That’s the beauty of cruising – there are plenty more ships in the sea and there’s one to suit just about everybody.

But if you enjoy personal service, the intimacy of a small group, beautiful scenery and a quiet time and space book a place on The Majestic Line. While you can’t guarantee the weather, you definitely get away from it all while staying close to home – something now that’s more important than ever.