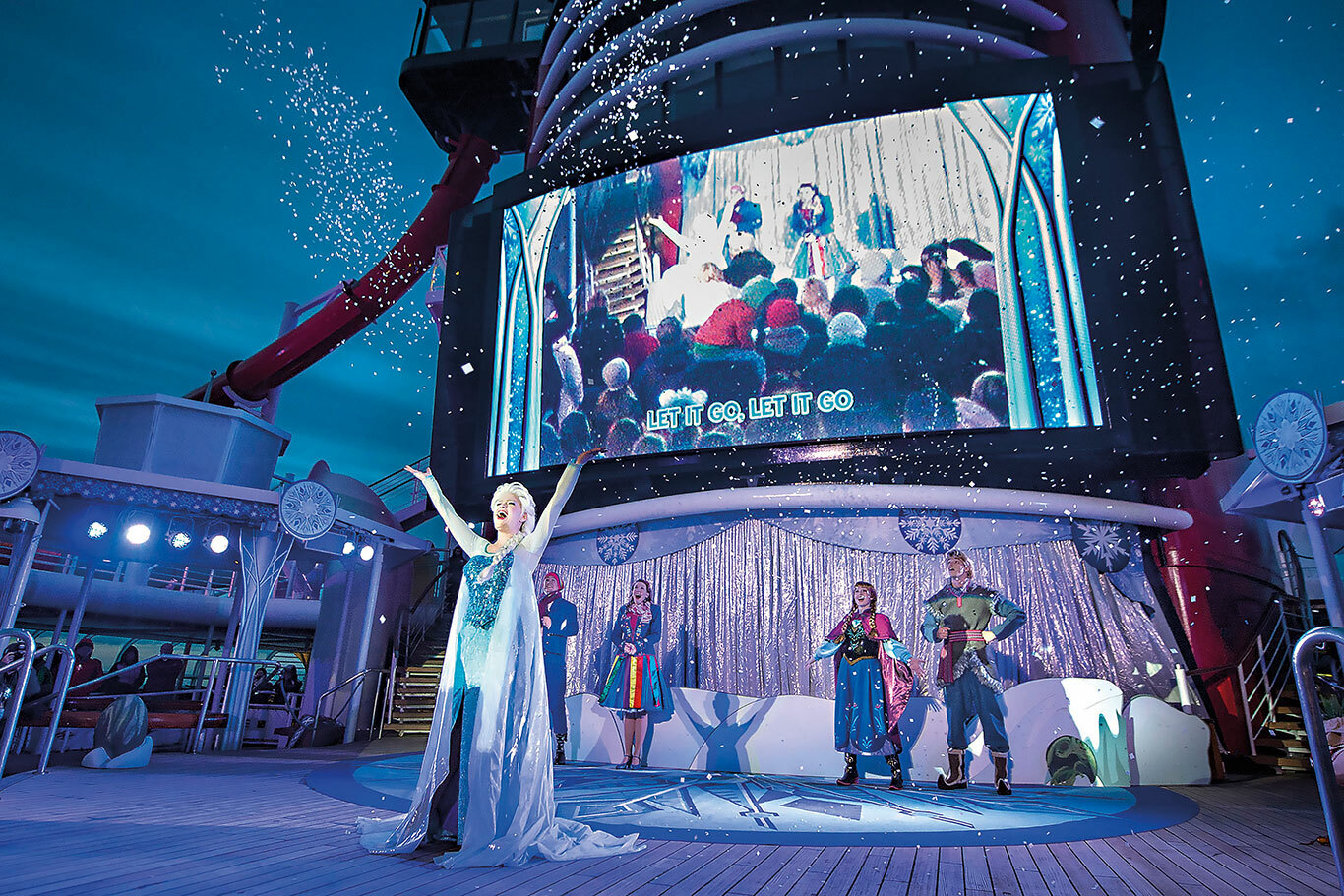 Who said Disney was just for kids? A Frozen-themed cruise to Norway’s fjords aboard Disney Magic is the perfect chill-out for grown-ups, too

Sipping a glass of Moët, I’m about to embark on a champagne brunch, even though it’s only 10am. I’m surrounded by marble, Venetian glass and panoramic views of the ocean.

All I have to do is stroll out of my private dining room to explore the buffet, which is piled high with all manner of foodie temptations including cheeses, seafood and caviar. But I mustn’t overdo it. Next stop is a dash to the ship’s atrium to meet Mickey Mouse himself (well, this is a Disney cruise, after all).

I’m on Disney Magic – one of the fleet’s four ships – heading to Norway’s fjords on a seven-night Frozen cruise from Dover. Naturally, there are activities galore for babies, toddlers, kids and teens – but let me tell you, this is no childish adventure and the ship is definitely not just for children.

The House of Mouse has grown up (Disney is 96 in October) and while it’s still first class at entertaining children with its diverse range of characters, movies, theme parks and cruise ships, the brand has got its recipe for adults just right, too.

As well as the five-star Senses Spa & Salon, with its range of luxurious treatments including a couples’ room for massages and Elemis facials à deux, Disney Magic also offers the serene, adults-only Quiet Cove Pool and café, plus late-night dancing at Fathoms nightclub and live piano and cocktails at Keys.

To enjoy these very grown-up attractions, all we need to do is (whisper it!) get rid of our kids. And that turns out to be easier than we’d thought. After rushing to wave at Mickey in a mobbed daily meet-and-greet, our 10-year-old daughter is drawn like a magnet to the cookie-making class in Oceaneer Lab – one of two kids’ clubs for her age group – while our 16-year-old son can’t wait to dump his embarrassing parents and decamp to the Vibe teen club.

Although he has his own keycard to our shared stateroom, he only returns there to go for dinner with the family (‘as long as my friends don’t see me’) and then again at 3am to ‘crash’. Our daughter’s clubs supply never-ending activities, including ga-ga ball, parachute games and ‘Super Sloppy Science’, so my husband Alexio and I are left blissfully alone to explore.

With her striking black hull, decorated with gold and topped with two red funnels, the 2,700-passenger Disney Magic harks back to the great age of ocean liners. And her interiors, with their glamorous, Art Deco-inspired design, are a stunning combination of nostalgia and modernity.

There’s a dazzling choice of entertainment venues, too, and we head to Keys, a bar inspired by the Sunset Boulevard piano joints of Hollywood’s heyday. Here the music is as lively as the super-strong cosmopolitans; the decor is retro-cool and the service is flawless. But after a second cocktail (we don’t get out much without the kids) it’s time to collect the family for dinner.

There are three main restaurants on Disney Magic, and thanks to the line’s ‘rotational dining’ policy, guests get to savour each one twice during a week-long cruise. Alexio and I are impressed by Lumiere’s, with its deliciously Gallic menu (the French onion soup is amazing), while the kids both love Rapunzel’s Royal Table, where we get to meet characters from the Disney movie, Tangled.

Rapunzel, who celebrates her birthday here every night, becomes instant BFFs with my daughter – they bond over their long hair – while my son thinks the giant (and frankly quite scary) Snuggly Duckling Thugs are hilarious. But nothing is as magical as Animator’s Palate, where the restaurant and the waiters are all part of a show in which Disney’s iconic characters come to life.

It’s a jaw-dropping spectacle when the black-and-white restaurant explodes into colour, with plenty of surprises along the way (I won’t spoil them for you, but sharpen up your drawing skills before you go). The food is pretty magical, too, and my pasta parcels, filled with truffle-scented cheese, are a melt-in-the-mouth delight.

The gastronomic highlight, however, is Palo – the Venetian restaurant named after the long poles used by gondoliers – where my Italian husband enjoys a feast of prawns, crab, tuna and scallops, all so perfectly cooked that he declares it buonissimo.

Arriving at our first port of call, we’re up early to walk the cobbled lanes of the Danish capital, Copenhagen, and visit the famous Tivoli Gardens. One of the world’s oldest leisure parks, this charming attraction inspired Walt Disney to create the first Disneyland in California (he visited several times, and no doubt rode the 1914 wooden ‘Roller Coaster’, which was among the first of its kind and is still in service today).

Leaving the boys to sample this vintage thrill-ride, my daughter and I wander through the delightful gardens. The day rushes by in a riot of screaming and laughing on more rides, including the world’s largest carousel, before we head back to the ship.

There’s no time to relax, however. Before dinner we catch a show in the Walt Disney Theatre, and then the children vanish and we head to After Hours, the adults-only entertainment zone. Meanwhile, the ship sails on towards Norway, where tomorrow we will enjoy a Frozen adventure of our own.

Oslo looks a picture as we stroll through the pretty streets towards the Ice Bar, a cocktail venue with a difference. Here, everything is carved out of the frozen stuff, including the bar and even some of the customers (life-size human statues, dotted here and there). It’s breathtakingly beautiful and we stay for as long as we can, only leaving when my nose turns red and my husband’s teeth begin to chatter. (For more on what to see and do in Oslo, read our guide).

The following day brings more Norwegian fun. The boys head off for a high-octane RIB boat adventure in Kristiansand – a compact city dubbed the Pearl of the South because of its warmer climate and palm-fringed beach – while my daughter and I choose a more sedate ride on the Setesdalsbanen vintage railway.

Over a five-mile stretch of narrow-gauge track, its steam loco and wooden carriages offer an enchanting ride back through history. Docked at Stavanger next morning, we take a boat trip to Bakers’ Paradise, a seaside inn and trading post on a rugged island.

Here we feast on giant Norwegian waffles with fruit and sour cream – delicious – before embarking on a two-hour cruise through spectacular Lysefjord, where we stop to feed the nimble goats that magically cling to the sheer cliff face, easily catching the bread we throw to them.

At Pulpit Rock, one of the most famous spots in Norway, we gaze skywards to see where Tom Cruise performed one of his famously dangerous stunts while filming Mission: Impossible – Fallout. It was all in a day’s work for the Hollywood star, who clambered 2,000ft above the chilly waters of Lysefjord. Tourists can do the same, if they’re fit and brave enough, but don’t attempt it if you suffer from vertigo.

That night the ship turns back towards Dover, but another sea day lies ahead before we arrive home. That means we have time to visit the Bibbidi Bobbidi Boutique to give our very own Princess a makeover (she emerges suitably sparkly and wearing a crown).

As we sip our cocktails that evening, gazing through giant portholes while the sun slides over the horizon, it’s the perfect ending to our Frozen adventure. If you’re looking for a magical family holiday that’s cool for discerning grown-ups too, Mickey and friends have just the thing.