Undoubtedly the most extraordinary island in the Aegean, crescent-shape Santorini remains a mandatory stop on the Cycladic tourist route—even if it's necessary to enjoy the sensational sunsets from Ia, the fascinating excavations, and the dazzling white towns with a million other travelers. Called Kállisti (the "Loveliest") when first settled, the island has now reverted to its subsequent name of Thira, after the 9th-century-BC Dorian colonizer Thiras. The place is better known, however, these days as Santorini, a name derived from its patroness, St. Irene of Thessaloniki, the Byzantine empress who restored icons to Orthodoxy and died in 802. You can fly conveniently to Santorini, but to enjoy a true Santorini rite of passage, opt instead for the boat trip here, which provides a spectacular introduction. After the boat sails between Sikinos and Ios, your deck-side perch approaches two close islands with a passage between them. The bigger one on the left is Santorini, and the smaller on the right is Thirassia. Passing between them, you see the village of Ia adorning Santorini's northernmost cliff like a white geometric beehive. You are in the caldera (volcanic crater), one of the world's truly breathtaking sights: a demilune of cliffs rising 1,100 feet, with the white clusters of the towns of Fira and Ia perched along the top. The bay, once the high center of the island, is 1,300 feet in some places, so deep that when boats dock in Santorini's shabby little port of Athinios, they do not drop anchor. The encircling cliffs are the ancient rim of a still-active volcano, and you are sailing east across its flooded caldera. On your right are the Burnt isles, the White isle, and other volcanic remnants, all lined up as if some outsize display in a geology museum. Hephaestus's subterranean fires smolder still—the volcano erupted in 198 BC, about 735, and there was an earthquake in 1956. Indeed, Santorini and its four neighboring islets are the fragmentary remains of a larger landmass that exploded about 1600 BC: the volcano's core blew sky high, and the sea rushed into the abyss to create the great bay, which measures 10 km by 7 km (6 mi by 4½ mi) and is 1,292 feet deep. The other pieces of the rim, which broke off in later eruptions, are Thirassia, where a few hundred people live, and deserted little Aspronissi ("White isle"). In the center of the bay, black and uninhabited, two cones, the Burnt Isles of Palea Kameni and Nea Kameni, appeared between 1573 and 1925. There has been too much speculation about the identification of Santorini with the mythical Atlantis, mentioned in Egyptian papyri and by Plato (who says it's in the Atlantic), but myths are hard to pin down. This is not true of old arguments about whether tidal waves from Santorini's cataclysmic explosion destroyed Minoan civilization on Crete, 113 km (70 mi) away. The latest carbon-dating evidence, which points to a few years before 1600 BC for the eruption, clearly indicates that the Minoans outlasted the eruption by a couple of hundred years, but most probably in a weakened state. In fact, the island still endures hardships: since antiquity, Santorini has depended on rain collected in cisterns for drinking and irrigating—the well water is often brackish—and the serious shortage is alleviated by the importation of water. However, the volcanic soil also yields riches: small, intense tomatoes with tough skins used for tomato paste (good restaurants here serve them); the famous Santorini fava beans, which have a light, fresh taste; barley; wheat; and white-skin eggplants.
What to see and doCruisesNeed to knowGalleryRelated articles

Santorini is top of many cruise itinerary wish lists and as such is a popular port of call on Eastern Mediterranean cruise itineraries, as well as Greek island cruises around the Cyclades. The beautiful Greek island is awash with dramatic scenery, breathtaking views, volcanic wonders and cultural and historic gems. Comprising two towns, Fira and Oía, you will have plenty of time to explore both on your cruise stopover, or if you’re feeling too lazy for sightseeing, you can spend your time soaking in the sun and sea air at the beach or enjoying a crisp glass of white wine at one of Santorini’s many wineries.

What to see and do in Santorini

Santorini’s capital Fira is home to a number of fascinating museums. The Archaeological Museum of Thera was built in 1960 to replace an older one which had collapsed by the 1956 Amorgos earthquake. It houses finds from ancient Thera and Akrotiri, as well as from other Cyclades islands. Other museums in Fira worth a visit include the Museum of Prehistoric Thera; built on the site of the old Ypapanti Church, it houses a large number of ancient artifacts from various excavations on Santorini, including Akrotiri and nearby Potamos.

Suggested to have been the possible inspiration for Plato’s story of Atlantis, this prehistoric city was destroyed in the Theran eruption sometime in the 16th century BC and covered in volcanic ash. Modern excavations, which began in 1967, have unearthed the archaeological remains of the buried city and today, visitors can among the two-and three-story buildings which were once part of the Bronze Age settlement.

This active volcanic crater is located In the southern Aegean Sea. Twelve notable eruptions have been recorded from the volcano, the most major of which was in 1650BC. Smaller explosions have occurred since, with the most recent being in 1950. Cruise lines including MSC Cruises and NCL offer excursions to Nea Kameni, an island in the centre of the Santorini caldera, where you’ll be able to hike to the crater of the volcano, which offers amazing views of Santorini and the cliffs of the caldera, before sailing to Palea Kameni for a dip in its thermal springs.

Santorini is blessed with many beautiful beaches, almost all of which feature the signature rugged, dark-grey volcanic sand. Located 10km from Fira, Kamari is one of the most popular beach resorts and the most pristine, boasting good facilities including showers, sunbeds and umbrellas, as well as a range of watersports activities, from jet skis to scuba-diving. The waterfront is lined with al fresco late-night bars, cocktail lounges and seafood tavernas. Other notable beaches include Perívolos and Períssa, as well as Baxédes and Kouloúmbo, which are located near Oía.

Said to have inspired countless artists and poets, the picturesque village of Oía – situated on the northwestern tip of Santorini – is famed for its breathtaking sunset views, which are best captured from the coastal town’s Byzantine castle ruins. Often pictured in travel publications, Oía is also home to the magnificent blue-domed St Gerasimos Church. After you’ve wandered through the village’s tiny paths lined with whitewashed villas, enjoy some Greek seafood at one of the waterfront tavernas while the sun sets. 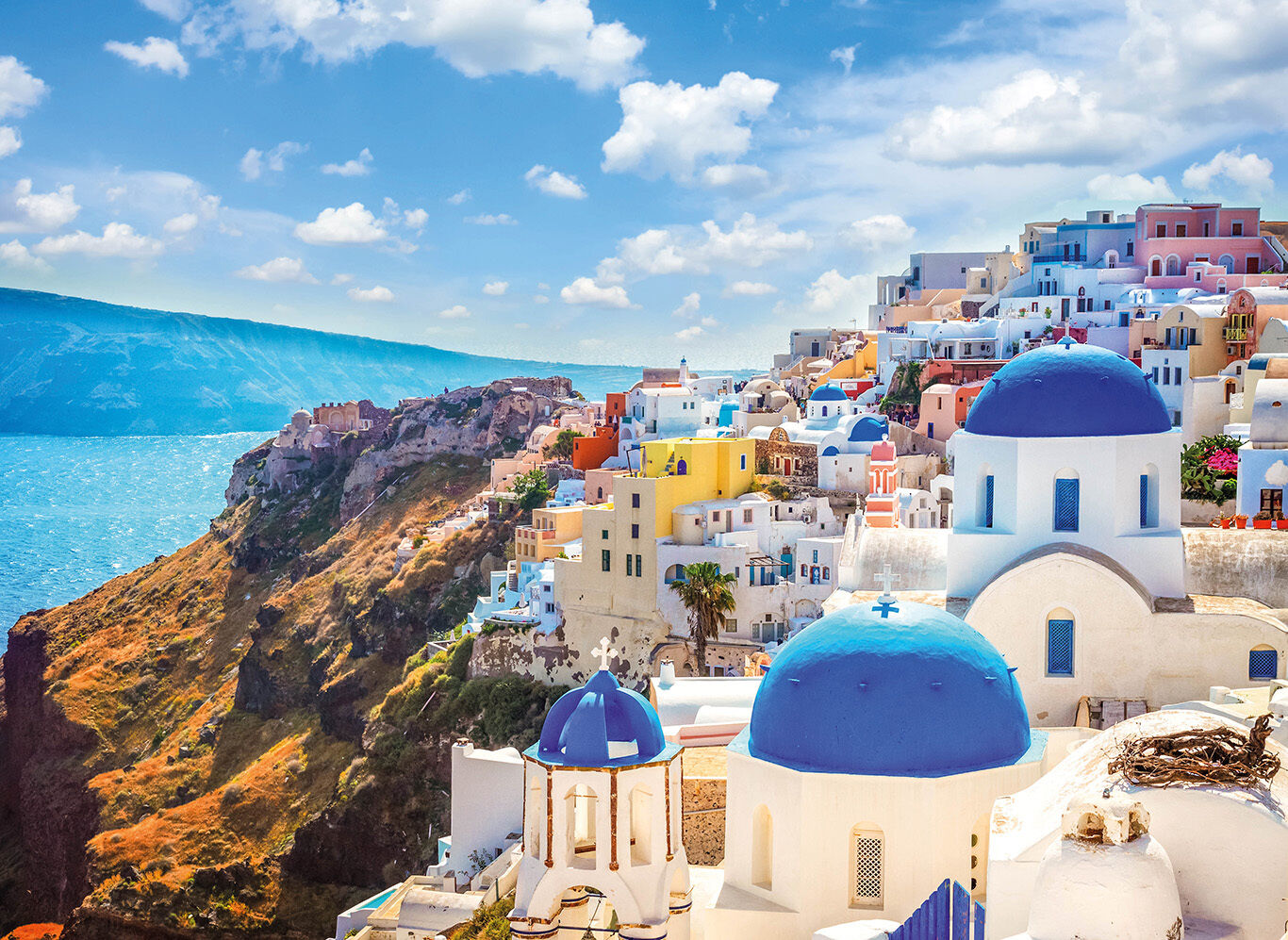 Need to know when travelling to Santorini

Getting around in Santorini

Santorini’s main harbour (the ferry port of Athinios) isn’t able to accommodate many large cruise ships, so ships typically wait at the bottom of the Caldera Cliffs in Fira, the capital of Santorini. There is no cruise terminal in Santorini, so visitors are tendered ashore by small boats. Once in Santorini, you can easily walk around the island on foot or you can take the bus, which will take you from one town to another, or a taxi.

When to go to Santorini

The Mediterranean cruise season runs from April through to November. For hot weather, the best time is the summer months of June, July and August, but if you wish to avoid the crowds, then it’s best to travel outside of these months.

Greece and its islands use the euro.

If you hold a British Citizen passport and are visiting for less than three months, you don't need a visa to enter Greece. 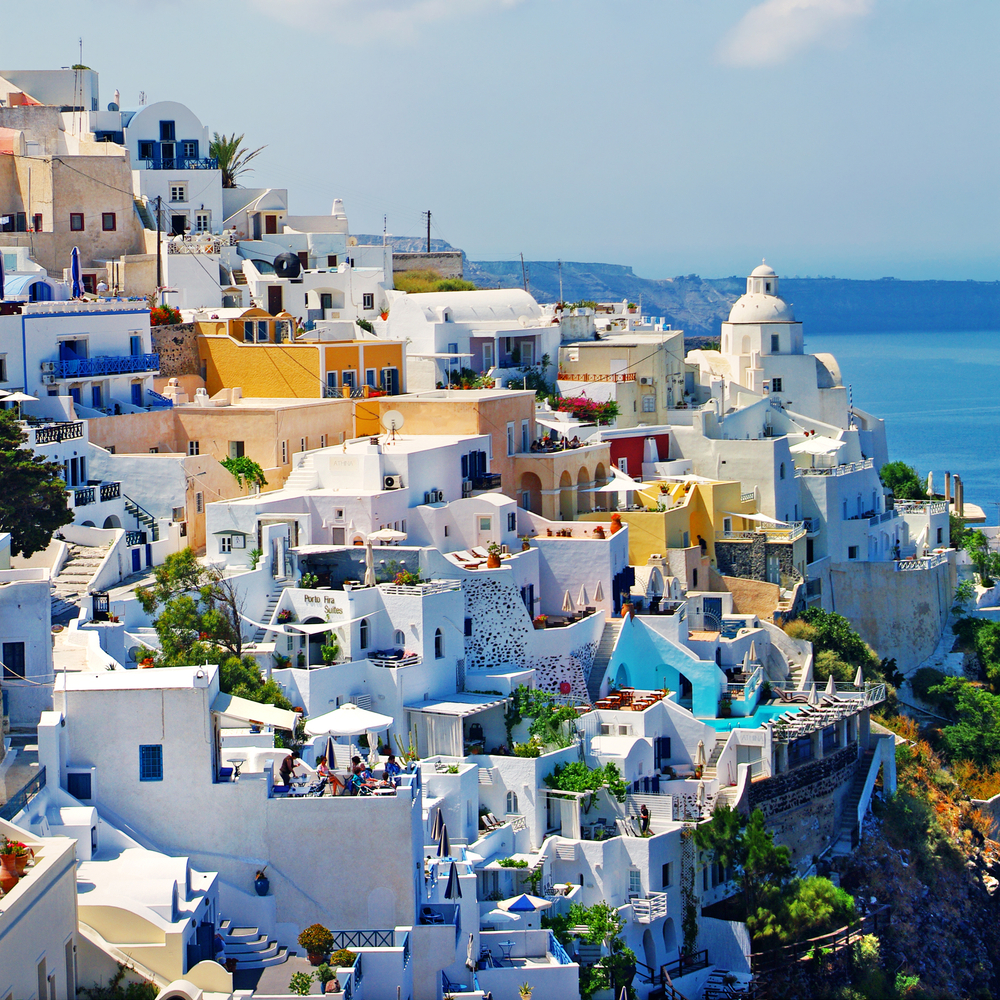 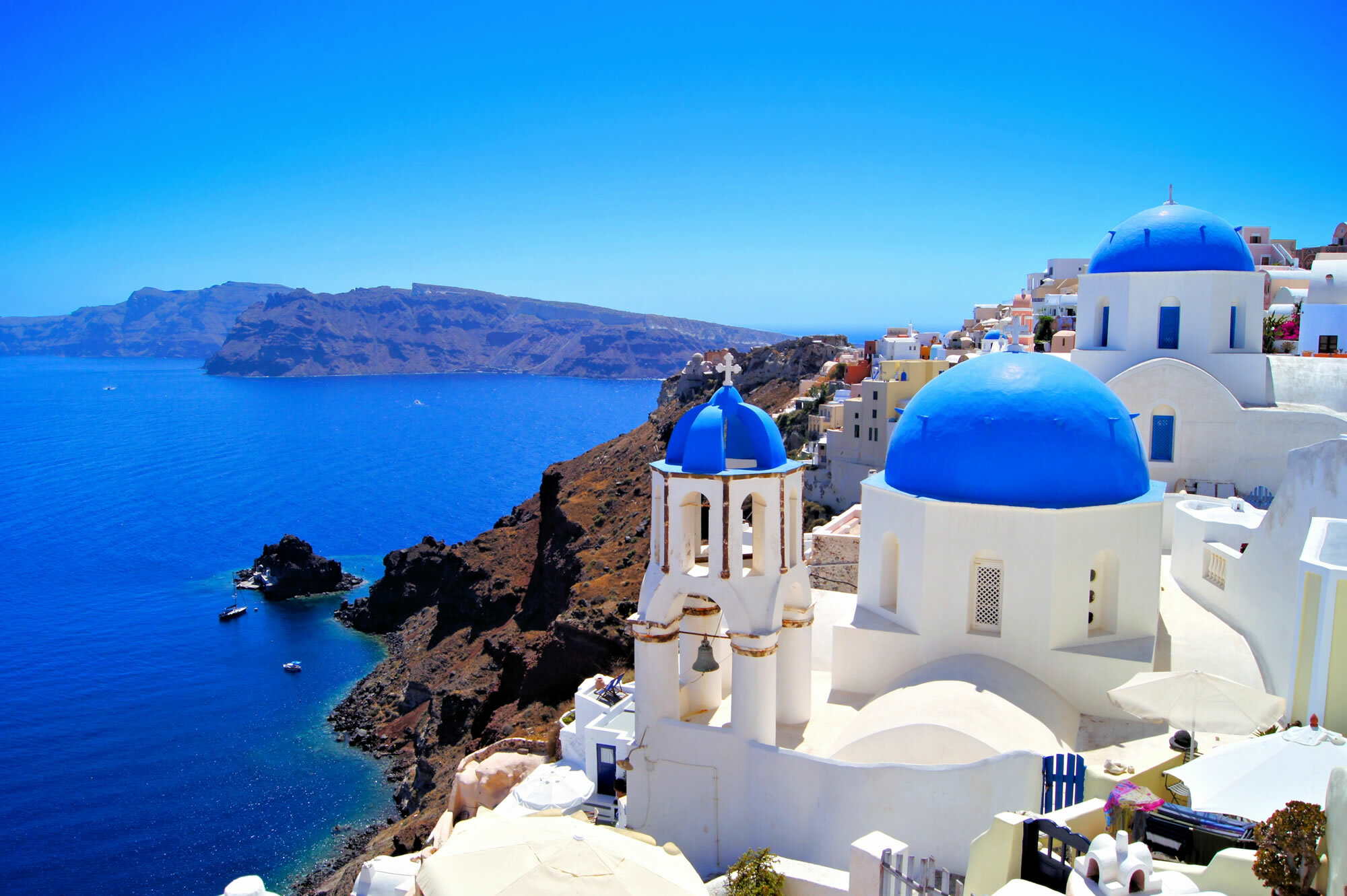 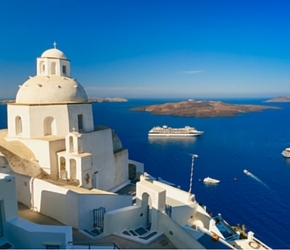 The beautiful Santorini in Greece 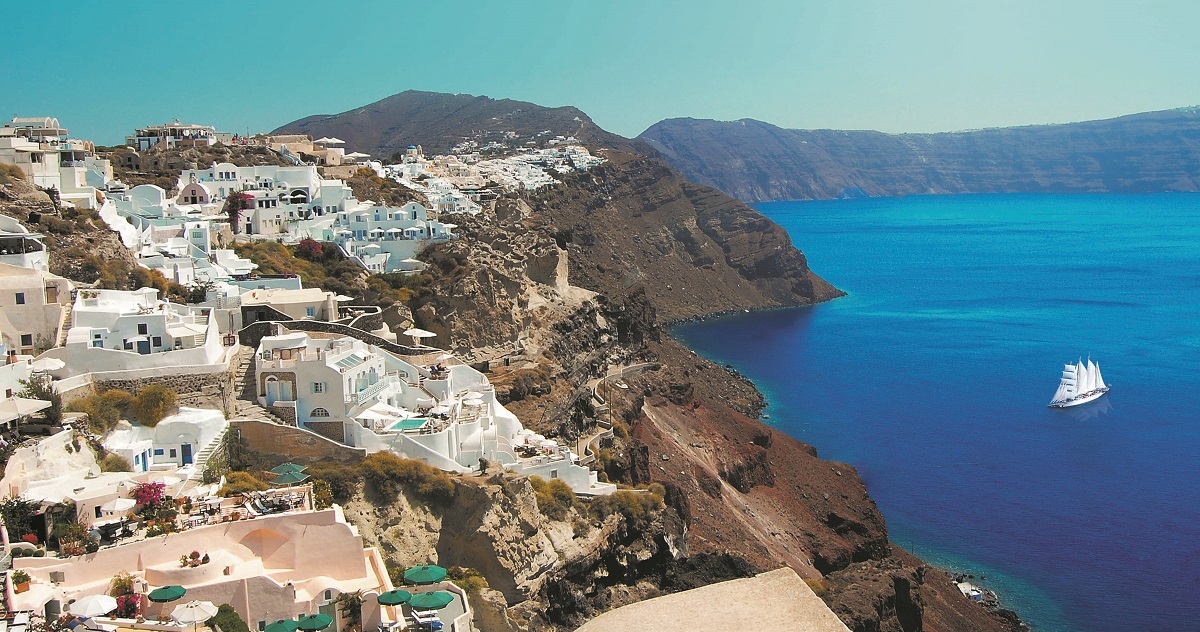 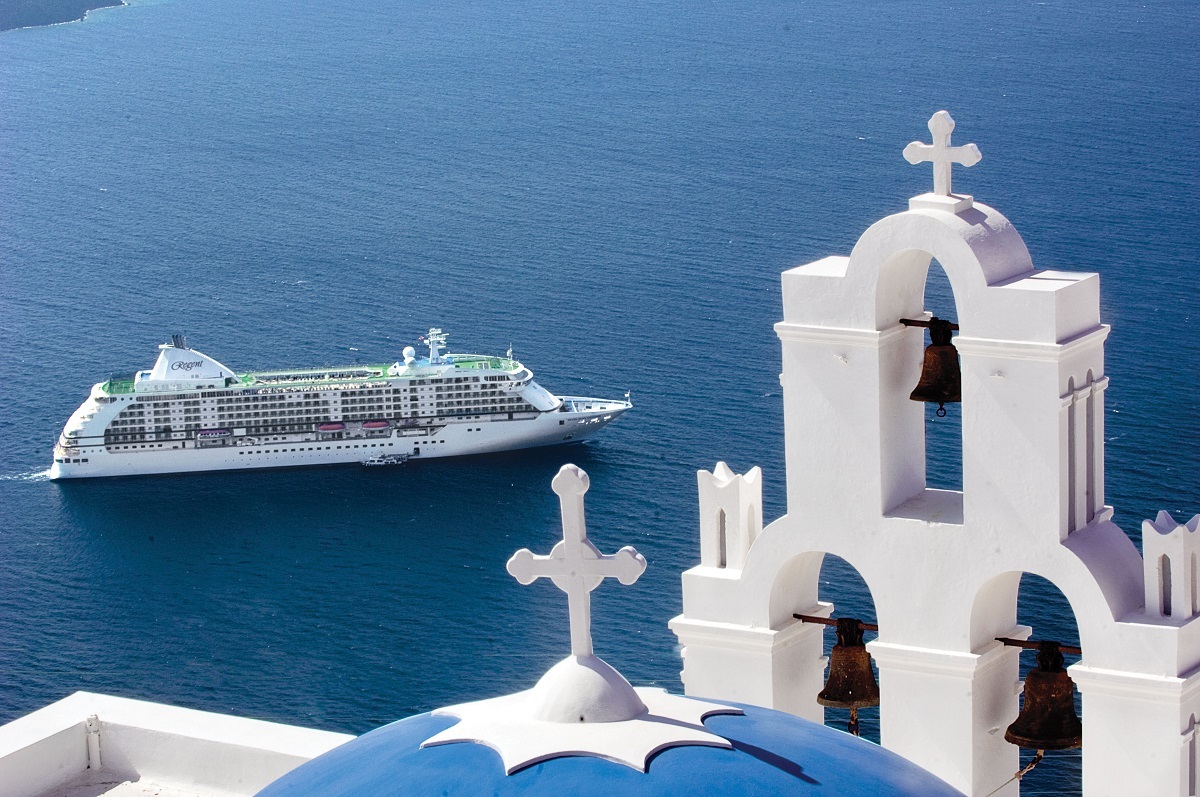 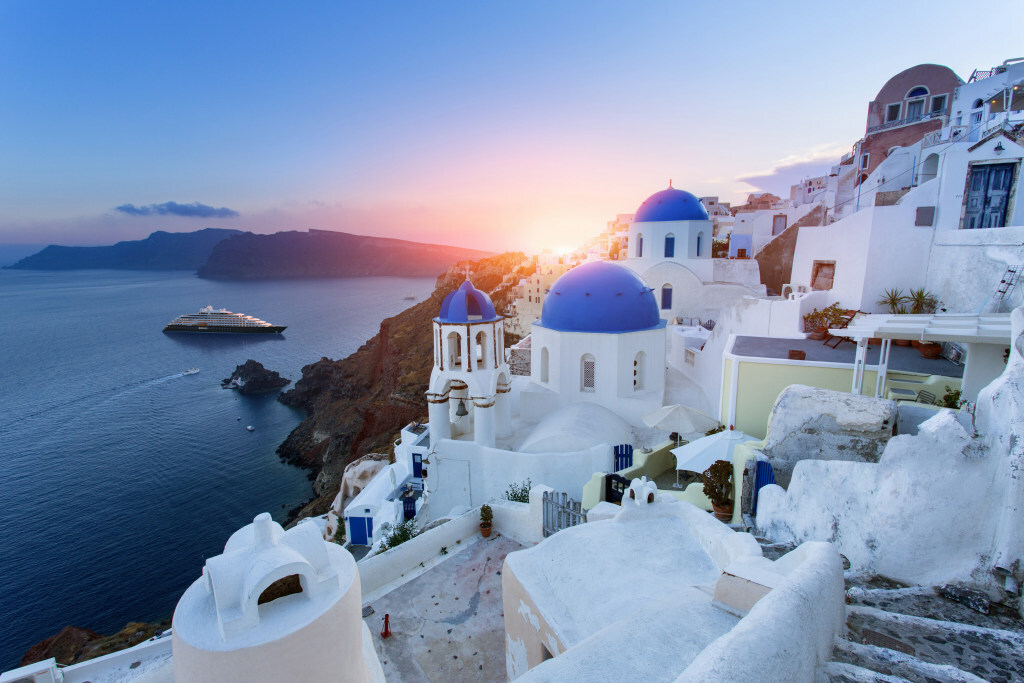 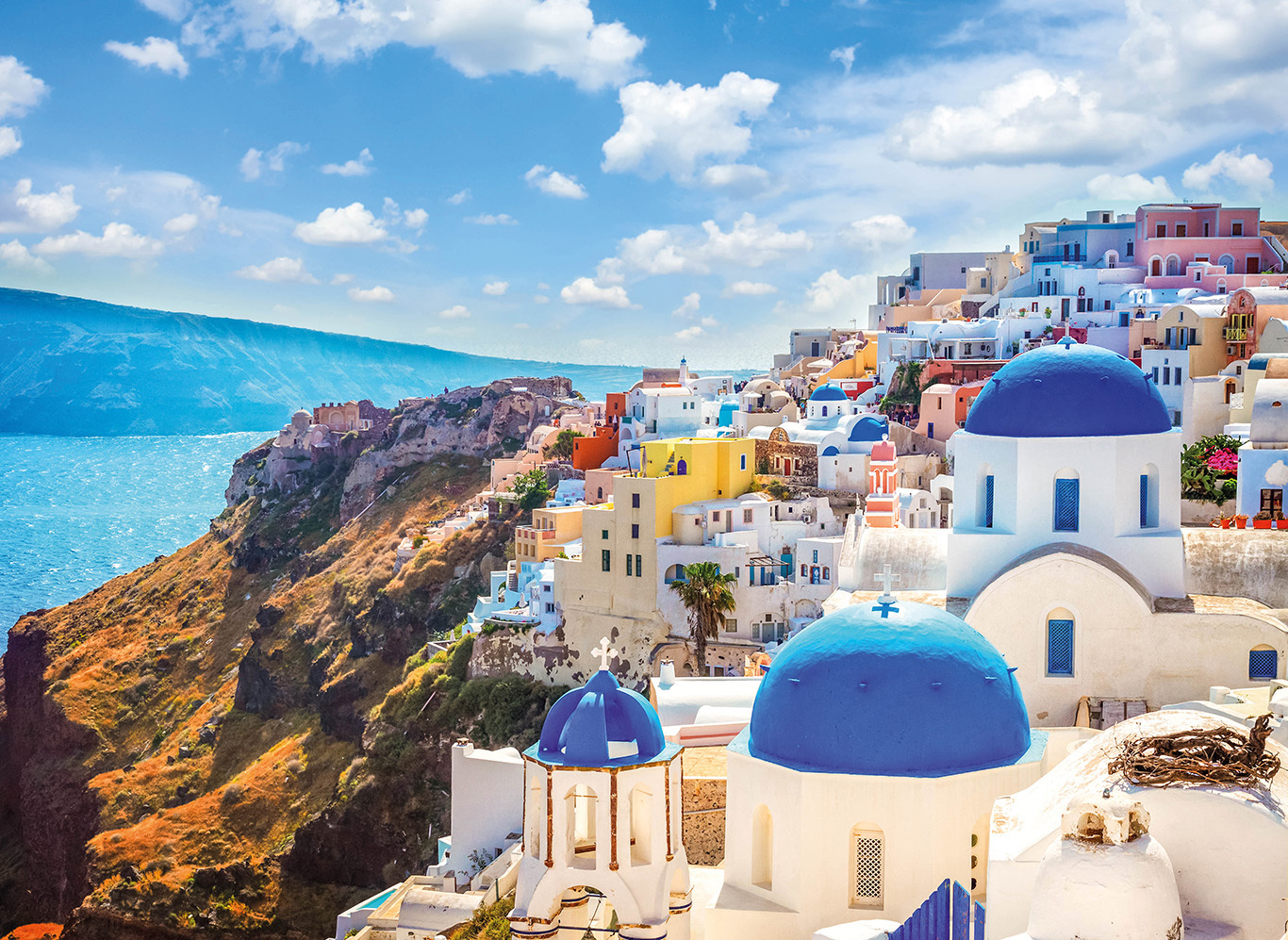 Sailings include stops at iconic Santorini 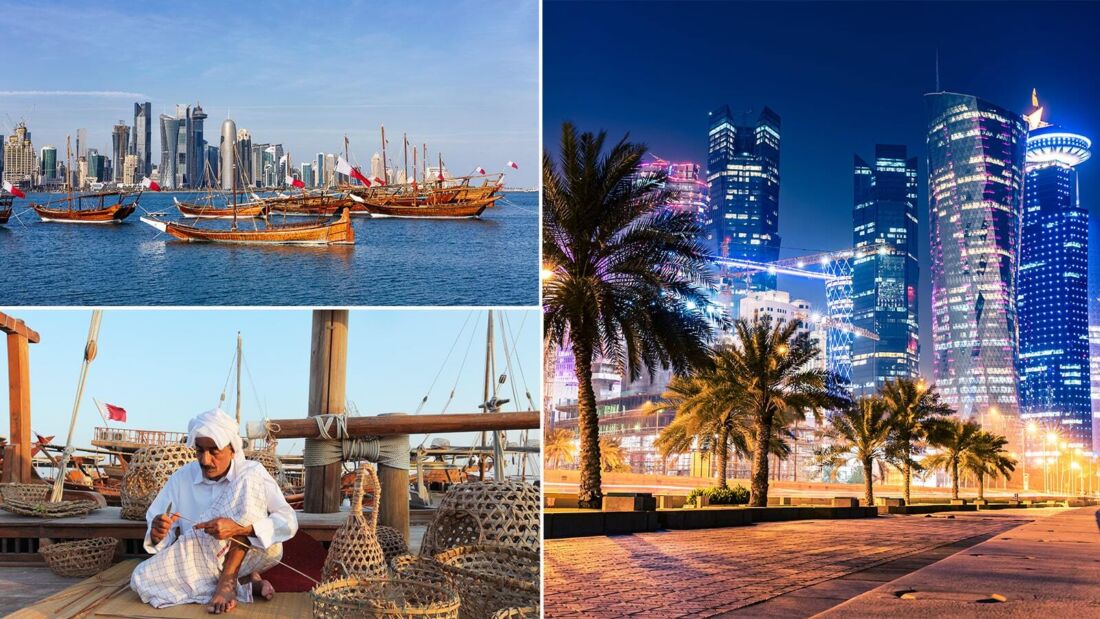 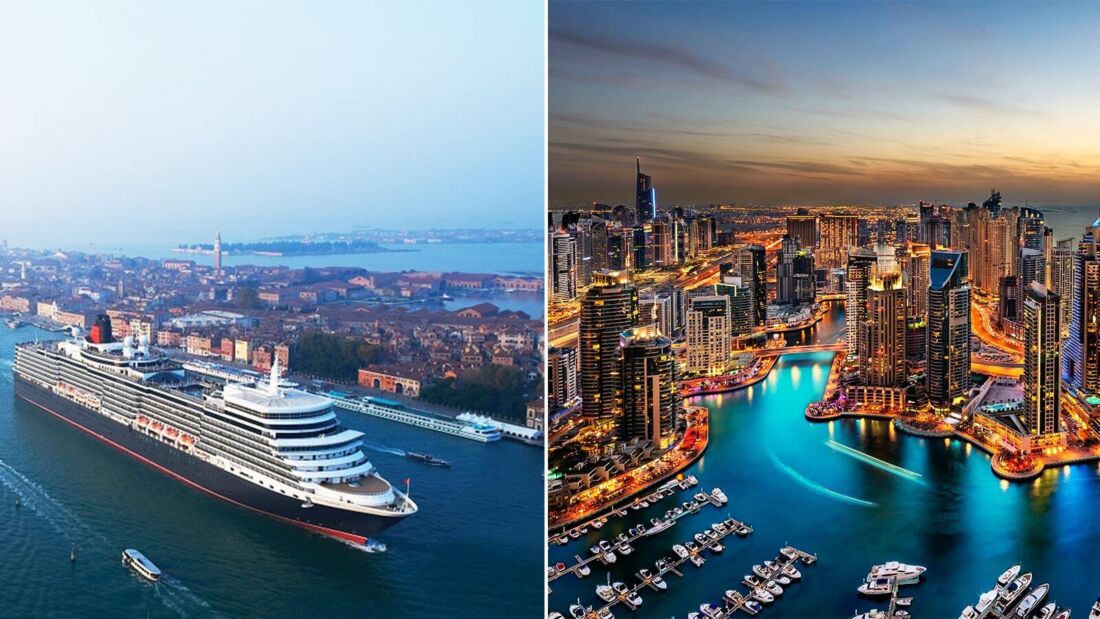 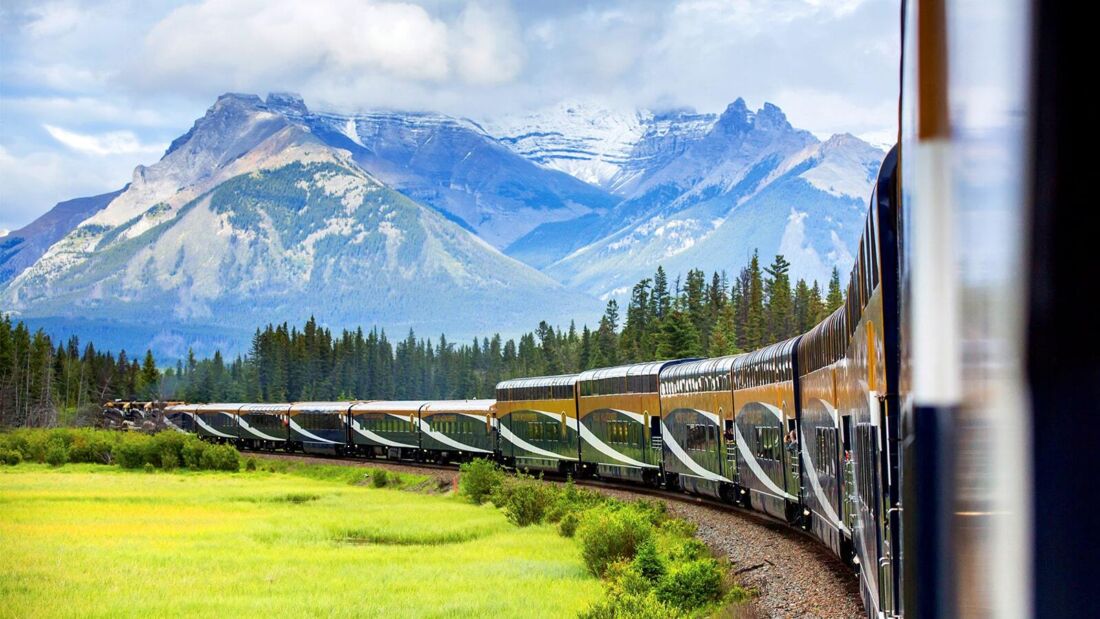 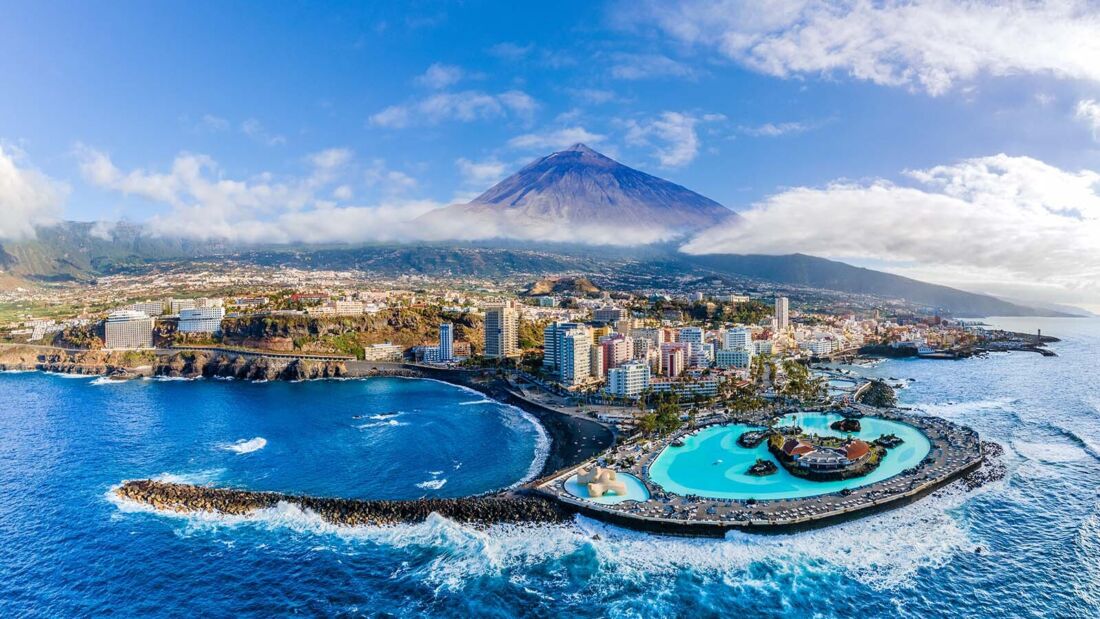 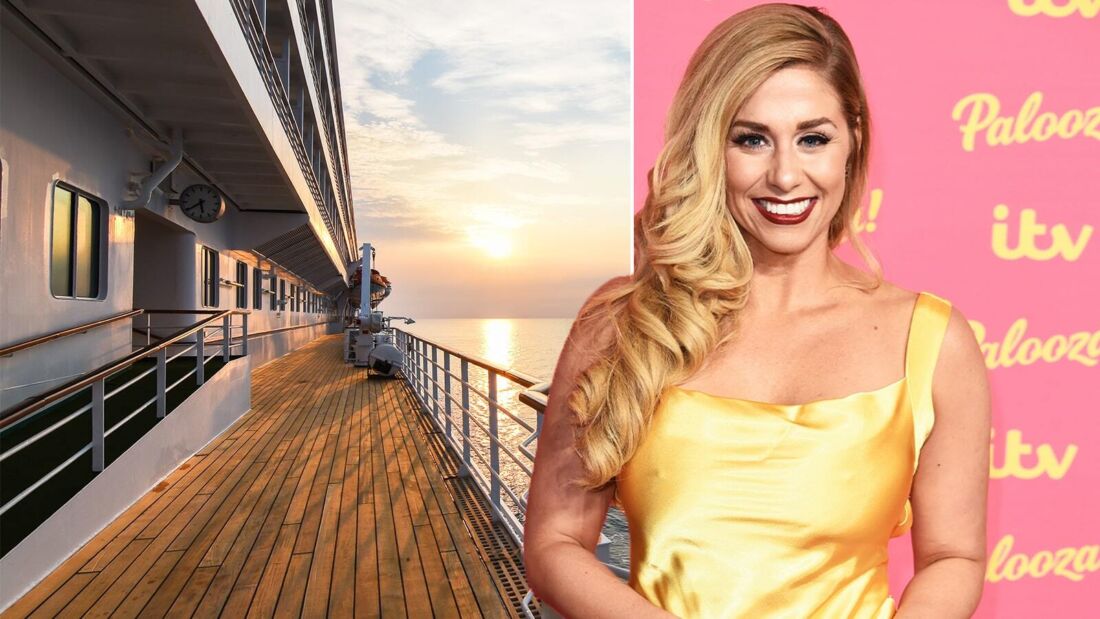 Cruise only from
£219*pp
View more