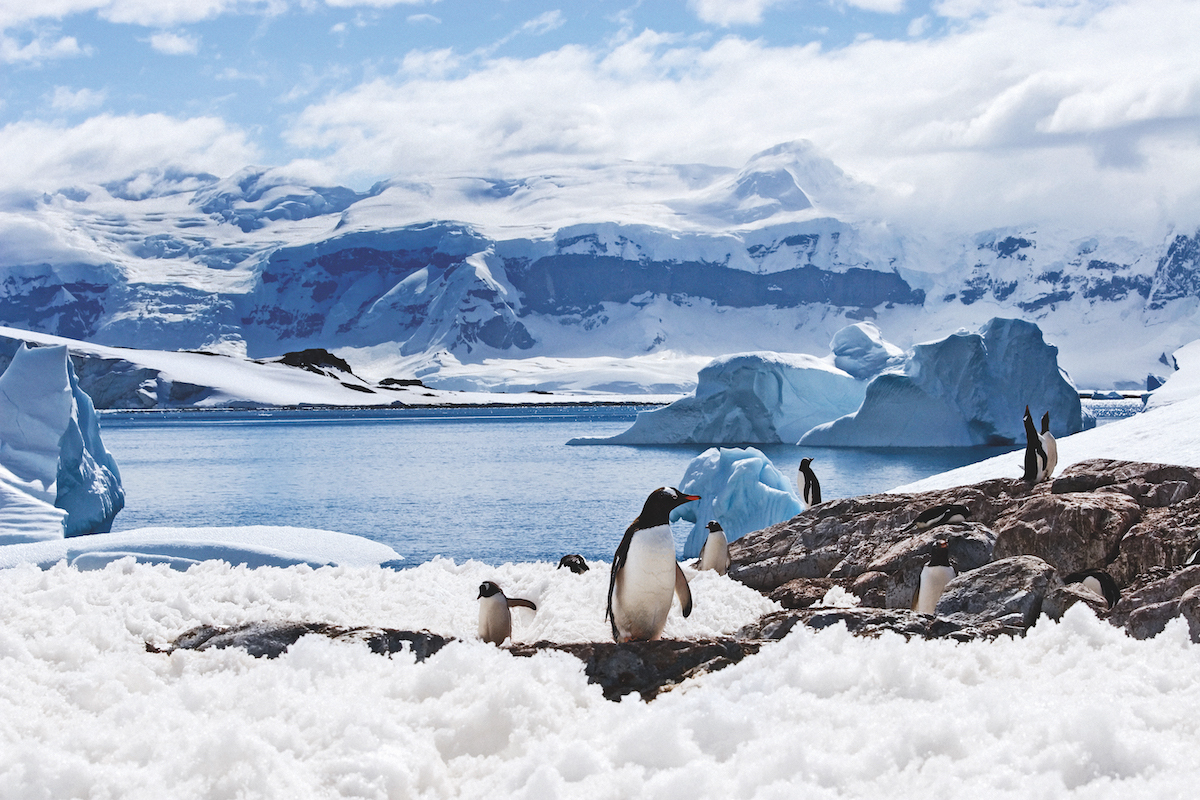 Polar Express: The Ultimate Guide To Arctic And Antarctica Cruises

Voyaging to the Arctic or Antarctica will always be an incredible experience, but which cruise lines do it best? Dave Monk investigates…

Offering landscapes and wildlife like nowhere else on earth, a polar voyage is truly the ultimate expedition cruise. It’s an adventure that few have ever experienced, although visitor numbers are rising fast.

The sky’s the limit on fares, too, with some visitors willing to pay £35,000 – or more – for the privilege. With prices so high, you need to do some serious homework before you book your cruise.

Start by talking to specialised tour operators with experts who have cruised to these destinations themselves and can answer all your questions. Good companies to look out for include Polar Routes, Explore, Audley Travel, Swoop Antarctica and Wildfoot Travel.

Martin Johnson, director of Polar Routes, says: “The polar regions offer one of the last true wildernesses in the world. Land in Antarctica during the cruise season and you will be one of just a few thousand people occupying an entire continent.”

“The ships are specifically designed to operate in these waters, and the newest ones offer a supreme level of comfort, with great amenities and advanced technology that makes cruising through ice and treacherous waters easier. They are also having a much smaller impact on these pristine environments.”

So if you fancy following in the footsteps of the great polar explorers and booking a voyage to the ends of the earth, here’s our pick of the best…

Visiting the Arctic or Antarctic is thrilling enough – but what if you could actually travel to the North Pole? Poseidon Expeditions has been sailing to the very top of the world for almost 20 years on its nuclear-powered Russian icebreaker, 50 Years of Victory.

Departing from Murmansk, the ship can slice through 10ft-thick ice, allowing guests to enjoy a barbecue on the frozen sea and link hands around that magical spot where every direction points south. Some are even brave (or foolhardy) enough to take a dip.

The 12-night expedition, which also includes landings on Franz Josef Land in the Russian High Arctic to see polar bears, walruses and whales, costs from around £24,000 per person for a standard stateroom, and up to £35,000 for the top Arktika Suite – plus flights. The ship also features two saunas, a volleyball court, spa, gym and pool for its 124 guests, outnumbered by 128 crew.

If you prefer to head south, Silversea offers a ‘fast track to the last continent’, flying to Antarctica in business-class comfort on a private plane, avoiding the dreaded Drake Passage sea crossing and saving four days on the return journey. Departing from Punta Arenas in Chile, guests land on King George Island, 75 miles off the Antarctic coast, for six nights’ polar cruising aboard Silver Explorer, which carries 144 passengers and 118 crew.

Can’t face the prospect of going to the poles without travelling in five-star comfort? Book a cruise on the ultra-luxury Scenic Eclipse, which launched last year, or Crystal Endeavor, which makes its debut this August. Both offer personal valets in all-suite accommodation, with as many crew as there are passengers.

In polar waters, Scenic Eclipse – which normally carries 224 guests – will be restricted to 200, the same number as its forthcoming rival. That’s not the only similarity, though – both ships have two helicopters and a submarine. Eclipse offers up to ten dining experiences, eight bars and lounges and a 6,000sq ft spa, as well as Zodiacs, kayaks and e-bikes.

Crystal Endeavor boasts the cuisine of chef Nobu Matsuhisa among its six dining options, and the culinary maestro will be joining a cruise in person on 15 October 2020. As well as the helicopters and submarine, the ship’s equipment will include jet skis, paddle boards and a remote-controlled underwater camera.

The two owner’s suites on the ship will each have a master bedroom and two guest bedrooms, a conservatory, garden and outdoor hot tub, as well as a private spa and gym with a sauna, steam room and treatment room. The rest of the guests won’t be left out, though, as the ship has a palm court with 270- degree views for whale-watching and viewing other wildlife, a combined spa and conservatory and an infinity pool.

Another ultra-luxury ship, Seabourn Quest, which carries 450 guests to Antarctica in all-suite accommodation, offers three fine-dining restaurants and a patio grill, as well as six bars and lounges. Its top suite, the Grand Wintergarden, has two bedrooms, two bathrooms and a dining area large enough to seat six people.

Every expedition ship visiting the poles will allow guests daily opportunities to see passing wildlife, from polar bears in the north to penguins in the south. But real wildlife enthusiasts should consider New Zealand-based Heritage Expeditions, which for more than 30 years has been taking small groups of animal lovers and wilderness enthusiasts to some of the world’s least-explored and biologically rich regions.

Its two small sister ships – Spirit of Enderby, with 50 passengers, and Akademik Shokalskiy, which carries 48 – are both ice-strengthened vessels built in 1984 for polar and ocean research.

On voyages ranging from eight to 31 days, passengers visit remote communities and rarely explored sites such as the sub-Antarctic island of Macquarie or – more than 10,000 miles north from there – Russia’s Wrangel Island, accompanied by expert botanists, ornithologists and naturalists.

Wrangel Island is known as the world’s maternity ward for polar bears – and here guests can sometimes see more than 100 of the endangered animals. It also has the largest population of Pacific walruses and lies near major feeding grounds of the grey whale.

On Antarctic voyages, passengers can see penguin breeding grounds, seals and sealions, and rare birds. New ship Magellan Explorer, launched in 2019 especially for Antarctica21’s fly-cruise business, allows guests to view whales and other animals from the bow or to go ashore in a fleet of 10 Zodiac boats.

G Adventures runs a selection of wildlife-focused tours endorsed by world-renowned primatologist Dr Jane Goodall. On a voyage around the Arctic Ocean island of Spitsbergen, for example, passengers could spot polar bears from the large observation decks of the 134 passenger G Expedition.

G Adventures 7-night ‘Realm of the Polar Bear’ cruise aboard G Expedition, round trip from Longyearbyen, departing 12 June 2021, from £2,379, gadventures.com

Norwegian operator Hurtigruten aims to be the most eco-friendly cruise line of all. Its new expedition ships, Roald Amundsen, which launched last year, and Fridtjof Nansen, arriving in March 2020, have hybrid engines that can switch from diesel to electricity to sail silently in vulnerable areas.

Roald Amundsen (named after the Norwegian who first reached the South Pole in 1911) was christened in the Antarctic using a block of ice instead of a bottle of champagne.

French company Ponant, which helped pioneer the polar market, prides itself on its environmental record. Having recently introduced a new class of expedition ship – including two coming up this year, Le Bellot and Le Jacques-Cartier – Ponant is now looking forward to welcoming its polar exploration ship, Le Commandant Charcot, in 2021.

This will be propelled by a hybrid engine, using liquefied natural gas – the cleanest fossil fuel – alongside battery power. Like the Hurtigruten ships, it will have a lab on board to study the ecosystems and biodiversity of Antarctica. Ponant has also set up a foundation to support projects focused on research, raising awareness and conservation, to help protect the ecology of the polar regions.

Meanwhile, German-based Hapag-Lloyd Cruises will fuel its expedition ships with low-pollutant marine gas oil on all sailings from July 2020 – not just in the Antarctic, where its use is mandatory. The line’s polar fleet – including Hanseatic Inspiration, which offers English speaking cruises – will also sail at a slower speed to cut fuel consumption by a third.

With Aurora Expeditions, Hapag-Lloyd Cruises, Scenic and Lindblad all expecting new additions modelled on their existing vessels, 2021 will be a year of sister ships.

Aurora is following the 120-guest Greg Mortimer, launched last year, with Sylvia Earle, named after the US marine biologist who was Time magazine’s first Hero for the Planet. The other lines’ new ships are Hanseatic Spirit, Scenic Eclipse II and National Geographic Resolution.

Ponant will launch its biggest ship yet, the new polar exploration vessel Le Commandant Charcot, which will carry 270 passengers, while Vantage Deluxe Travel is introducing its first oceangoing vessel, the 170-guest Ocean Explorer. With 15 dedicated solo cabins, the ship will visit Antarctica during its inaugural season in 2021.

Meanwhile, Seabourn’s new addition, Seabourn Venture, will have a six-passenger mini-sub equipped with underwater cameras, a manipulator arm – and a champagne chiller.

A sister ship will launch in 2022. Also joining the sector in 2022 will be Viking Expedition Cruises, with two new 378-passenger ships, Octantis and Polaris. Each stateroom will boast a ‘Nordic Balcony’ that will convert into an alfresco viewing platform, and the ships will have labs where guests can assist the onboard scientists.

The same feature appears on the Lindblad Expeditions ship National Geographic Endurance, launched in January. Watching wildlife is said to be easier with this design, as guests can see along the sides of the ship without having to lean out over a deck rail.

Other great sightseeing spots aboard Endurance include walk-out areas from the bridge and the observation lounge, while glass rails on the top deck mean a clear view – as does the 10,000sq ft of glass over the six guest decks. You can even enjoy the landscape sitting in twin infinity hot tubs, the sauna or a glass-walled yoga studio.

The X-bow design will also appear on Ocean Victory, the new Antarctic-bound ship that is due to join Albatross Expeditions in December.

Two helicopters are among the highlights of Ultramarine, the newest ship in Quark Expeditions’ fleet. The 199-passenger vessel also has two dining areas, four bars, a panoramic lounge and a lecture theatre.

Activities include kayaking, hiking, camping, skiing and mountaineering – but guests can also relax in the spa and sea-view sauna, or take a stroll on the promenade deck.

Fancy yourself as 007? Check out the technically advanced ships taking adventure cruising to new heights.

Oceanographers estimate that 90 per cent of the world’s seas remain unexplored. On a mission to change that is Hurtigruten, with its new Roald Amundsen, which is equipped with underwater drones. As well as being the world’s first hybrid-powered vessel, the 530-guest ship has been specially designed to sail in polar waters.

Launching this year, Crystal Cruises’ first expedition ship, Crystal Endeavor, is the stuff of futuristic fantasies. The polar-class vessel will have a pair of eight-passenger excursion helicopters and a seven-person submarine.

Viking enters the expedition market with new ships Octantis and Polaris in 2022. Guests can dive in two Beatles-inspired yellow submarines, and board inflatables in a cavernous internal slipway called ‘the hangar’.

Adventure Canada: With more than 30 years’ experience, the company offers both Arctic and Antarctic cruises, as well as trips to South and Central America and the US Pacific Northwest.

PolarQuest: Established in 1999, PolarQuest operates three expedition ships carrying up to 53 passengers to the island of Svalbard, and claims to offset 100 per cent of its carbon emissions.

Holland America: This value-for-money line offers an amazing 22-night voyage on its ship Westerdam to Antarctica in December 2020 which includes the chance of seeing a solar eclipse.

Princess Cruises: The 1,970-passenger ship Coral Princess has two 16-night polar sailings in December this year and January 2021. The first goes from Buenos Aires to Santiago, with four days of scenic cruising around Antarctica, and the second does the trip the other way round.