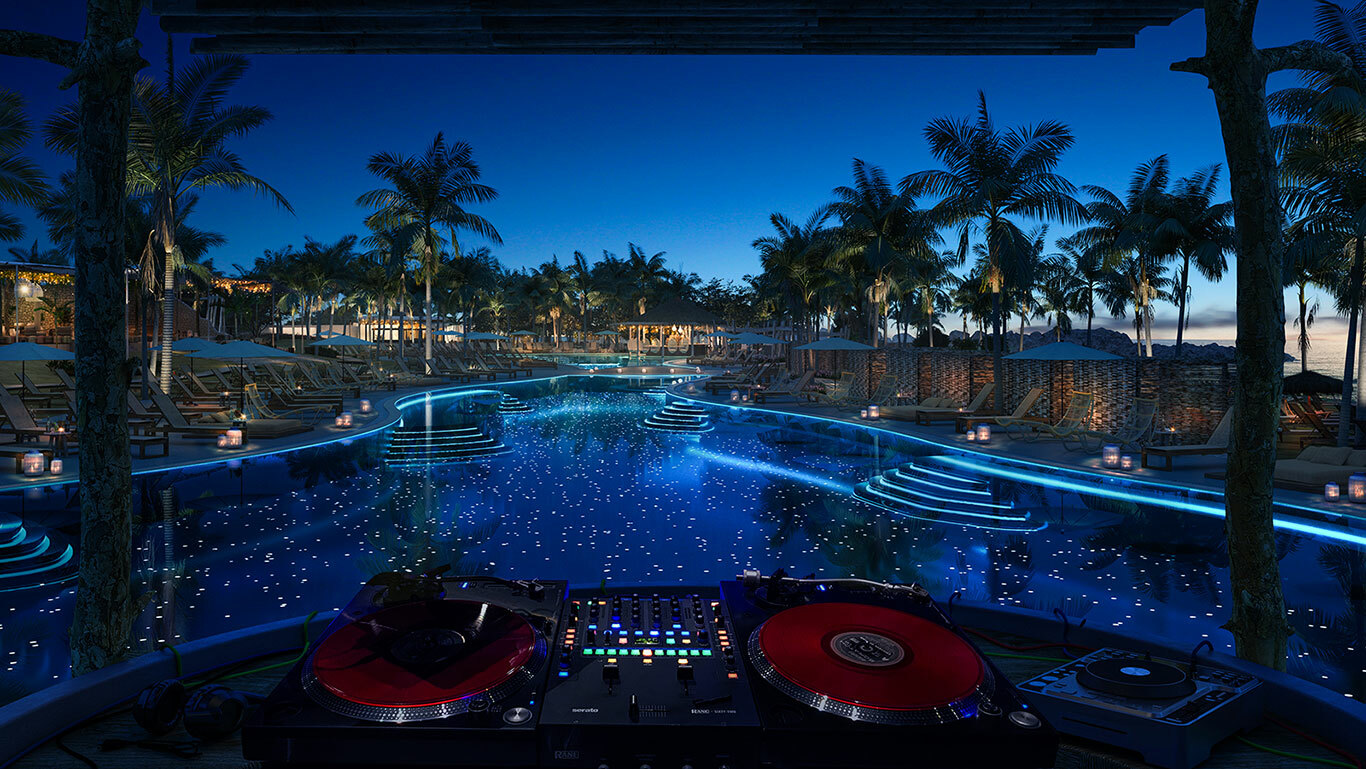 As part of its mission to redefine traditional cruise holidays and to incorporate its brand identity and heritage, Virgin Voyages announced earlier this year that music would play a massive part in the Scarlet Lady‘s (the company’s inaugural ship) onboard experiences.

Staying true to this statement, Virgin announced today their exciting partnership with award-winning DJ and producer Mark Ronson. In his role as Virgin’s “Minister of Music”, Ronson will create a series of pre-voyage and onboard playlists in a bid to develop and enhance the ‘Sailor’ experience. He will also curate the vinyl record selection in the RockStar Suites and the ship’s vinyl and music shop, Voyage Vinyl.

Furthermore, the producer will work closely with Virgin Voyages’ music teams to define the brand’s sound at sea as well as at The Beach Club in Bimini, Bahamas. Ronson has confirmed four performances at the luxurious private beach club, which is exclusive to Virgin Voyages guests while Scarlet Lady is docked at the island.

Commenting on his new role, Mark Ronson said: “I’m thrilled to be part of the Virgin Voyages’ Creative Collective, helping lead the charge in music. Sir Richard Branson and the Virgin brand were legendary game-changers in the music industry and it’s a thrill to join them as they bring that same spirit to sea travel.”

Adding to this, Tom McAlpin, president and CEO for Virgin Voyages, said: “We see music as an essential element to a holiday, not just for parties but also as the soundtrack to laughter, relaxation and much more. It’s an honour to have an outstanding artist like Mark Ronson helping us develop our sailor experience, alongside an exciting lineup of DJ’s joining our On Deck residency program.”

Along with Ronson, DJ and record producer Diplo has also been called on to play a set at the Beach Club in 2020, along with other leading artists. Along with parties at the island beach club, there will also be a number of signature onboard parties, including Scarlet Night.

Conceived, designed and produced by the award-winning producer behind Sleep No More, Queen of the Night, and The Donkey Show, Randy Weiner, Sailor guests can expect a night of amazing music, special performances and art installations.

As we approach the imminent launch of Scarlet Lady next year, we can no doubt expect more exciting announcements from Virgin Voyages as its worldwide talent search continues, so watch this space. In other exciting news, Virgin announced at this year’s CLIA 2019 conference that Scarlet Lady will in fact come to the UK in 2020, offering cruisers the chance to experience exclusive events in Dover and Liverpool before she sets sail to her new home in Miami.

Ronson’s poolside performance on 9 July can only be experienced by those who book the July 5, 2020 Mayan Sol sailing featuring stops in Costa Maya, Mexico and Bimini, Bahamas, aboard Scarlet Lady; virginvoyages.com