Although the fishing boats still go out in good weather, Mykonos largely makes its living from tourism these days. The summer crowds have turned one of the poorest islands in Greece into one of the richest. Old Mykonians complain that their young, who have inherited stores where their grandfathers once sold eggs or wine, get so much rent that they have lost ambition, and in summer sit around pool bars at night with their friends, and hang out in Athens in winter when island life is less scintillating. Put firmly on the map by Jackie O in the 1960s, Mykonos town—called Hora by the locals—remains the Saint-Tropez of the Greek islands. The scenery is memorable, with its whitewashed streets, Little Venice, the Kato Myli ridge of windmills, and Kastro, the town's medieval quarter. Its cubical two- or three-story houses and churches, with their red or blue doors and domes and wooden balconies, have been long celebrated as some of the best examples of classic Cycladic architecture. Luckily, the Greek Archaeological Service decided to preserve the town, even when the Mykonians would have preferred to rebuild, and so the Old Town has been impressively preserved. Pink oleander, scarlet hibiscus, and trailing green pepper trees form a contrast amid the dazzling whiteness, whose frequent renewal with whitewash is required by law. Any visitor who has the pleasure of getting lost in its narrow streets (made all the narrower by the many outdoor stone staircases, which maximize housing space in the crowded village) will appreciate how its confusing layout was designed to foil pirates—if it was designed at all. After Mykonos fell under Turkish rule in 1537, the Ottomans allowed the islanders to arm their vessels against pirates, which had a contradictory effect: many of them found that raiding other islands was more profitable than tilling arid land. At the height of Aegean piracy, Mykonos was the principal headquarters of the corsair fleets—the place where pirates met their fellows, found willing women, and filled out their crews. Eventually the illicit activity evolved into a legitimate and thriving trade network. Morning on Mykonos town's main quay is busy with deliveries, visitors for the Delos boats, lazy breakfasters, and street cleaners dealing with the previous night's mess. In late morning the cruise-boat people arrive, and the shops are all open. In early afternoon, shaded outdoor tavernas are full of diners eating salads (Mykonos's produce is mostly imported); music is absent or kept low. In mid- and late afternoon, the town feels sleepy, since so many people are at the beach, on excursions, or sleeping in their air-conditioned rooms; even some tourist shops close for siesta. By sunset, people have come back from the beach, having taken their showers and rested. At night, the atmosphere in Mykonos ramps up. The cruise-boat people are mostly gone, coughing three-wheelers make no deliveries in the narrow streets, and everyone is dressed sexy for summer and starting to shimmy with the scene. Many shops stay open past midnight, the restaurants fill up, and the bars and discos make ice cubes as fast as they can. Ready to dive in? Begin your tour of Mykonos town (Hora) by starting out at its heart: Mando Mavrogenous Square.

The glamorous Greek island of Mykonos has long-lasting appeal, having been the playground of A-list celebrities since the 1950s and ‘60s. Despite its historic roots, the island has always moved with the times and is today home to nightclubs and nudist beaches, alongside ancient archaeological sites and religious buildings. Despite having become a party island, Mykonos remains visually stunning, all powder-white houses, marble pathways laced with bougainvillea and charming 16th century windmills. Mykonos cruise port is featured in the Mediterranean itineraries of most of the major cruise lines, including Norwegian Cruise Line, Costa Cruises, Royal Caribbean International, Holland America Line, MSC Cruises, Cunard, Pullmantur Cruises, Princess Cruises, Windstar Cruises, Crystal Cruises, SeaDream Yacht Club, Oceania Cruises, Azamara Club Cruises, Silversea and Regent.

What to see and do in Mykonos

Built by the Venetians in the 16th century, the island’s windmills have become a trademark of Mykonos, despite there only being a few of these wheat mills left. The five Windmills – also referred to as Kate Mili – sit on a small hill above Little Venice and are a must-visit. Head there in the early evening so you can enjoy a cocktail in the square across the road from the windmills and watch the sun go down.

One of Mykonos’ most famous areas is called Alefkantra, or Little Venice, due to its setting by the sea bearing a resemblance to the historic Italian city. The settlement of Little Venice was created during the 18th century by rich merchants and captains, and today features elegant medieval houses. This is the perfect place to enjoy a sundowner in one of the waterfront cafés as the sun sets over the Aegean Sea. 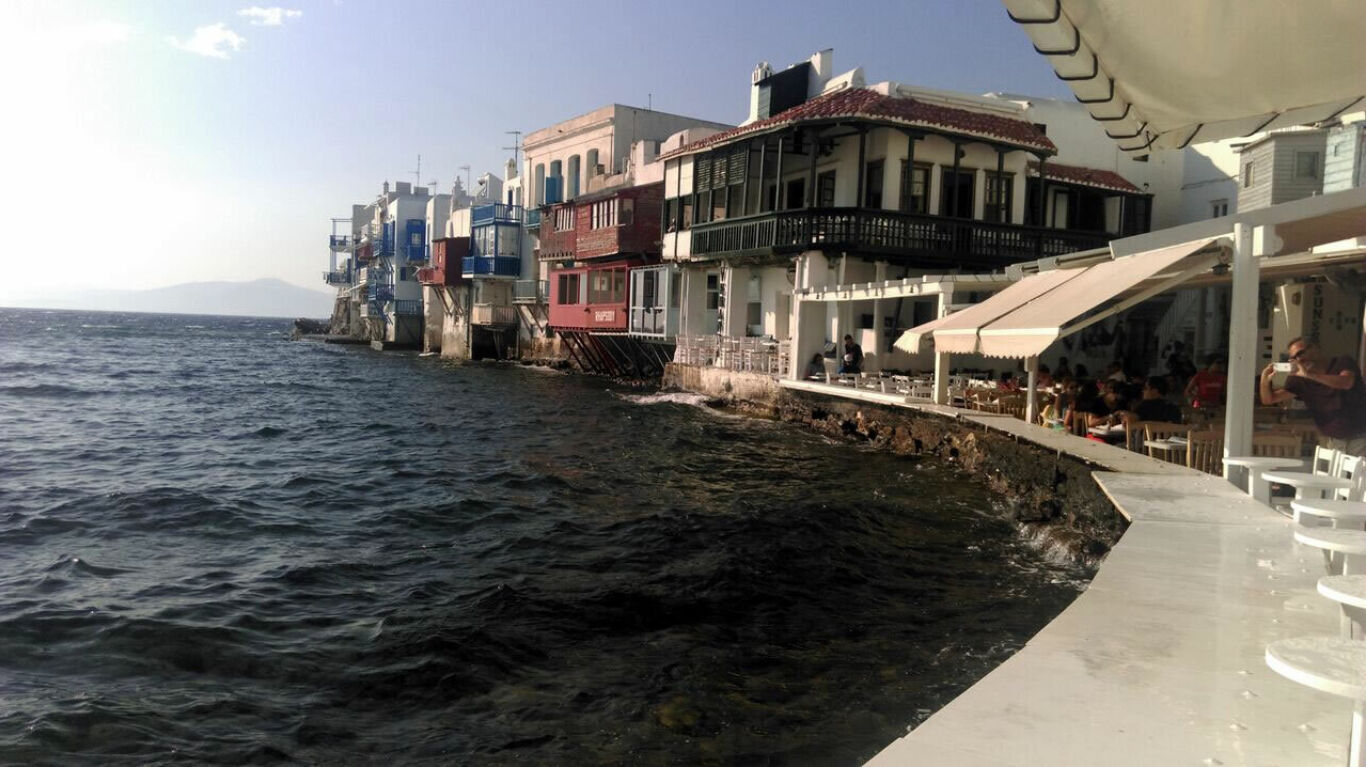 The Folklore Museum of Mykonos

Situated to the north of Ano Mera, the second biggest town on the island after Chora, the women’s monastery takes its names from the neighbouring hill. Dating back to the 18th century, the nunnery is a classic example of the monastic architecture of the Cyclades and is well-worth a visit. Ano Mera is also home to some other fascinating sites, including the ruins of 13th-century Venetian castle, Gyzi, and the restored 16th-century monastery Panagia Tourliani.

Located close by to the port, the Archaeological Museum of Mykonos was established in 1958 and its rich collections include exhibits dating from the Prehistoric to the Hellenistic period. Along with a collection of vases, the museum also displays sculptures, ceramics and jewels.

Founded in 1983, the museum is housed in a 19th century Mykonian building in Tria Pigadia. The Aegean Maritime Museum is a non-profit organisation that aims to preserve, study and promote Greek maritime history and tradition. It was notably the first ever Greek museum to restore living historical exhibits as they were originally designed and built. Exhibits include replicas of ships from the pre-Minoan period to this day, historical shipping documents, maps, ancient artifacts, navigational instruments, well as a collection of rare coins.

Mykonos’ bustling main town of Chora is a hub for international fashion designers and brands, including the world-famous Soho-Soho boutique, which stocks labels from Alexander Wang to Victoria Beckham, as well as handcrafted jewellery stores. Don’t leave Mykonos without buying a pair of house-designed leather sandals or hand-loomed weavings. If you’re not in the market to buy, then simply stroll around Chora’s charming labyrinth of narrow streets lined with sugar-cube-shaped, chalk-white buildings accented with bright blue doors. Just make sure not to get lost.

Many cruise lines offer boat trip excursions to the island of Delos, a sacred Greek archaeological site and the birthplace of twin gods Apollo and Artemis. Here, history buffs can wander around the crumbling ruins of its ancient theatre, Doric temples, markets and mosaic-laced houses – as well as the Terrace of the Lions statues and amphitheatre. 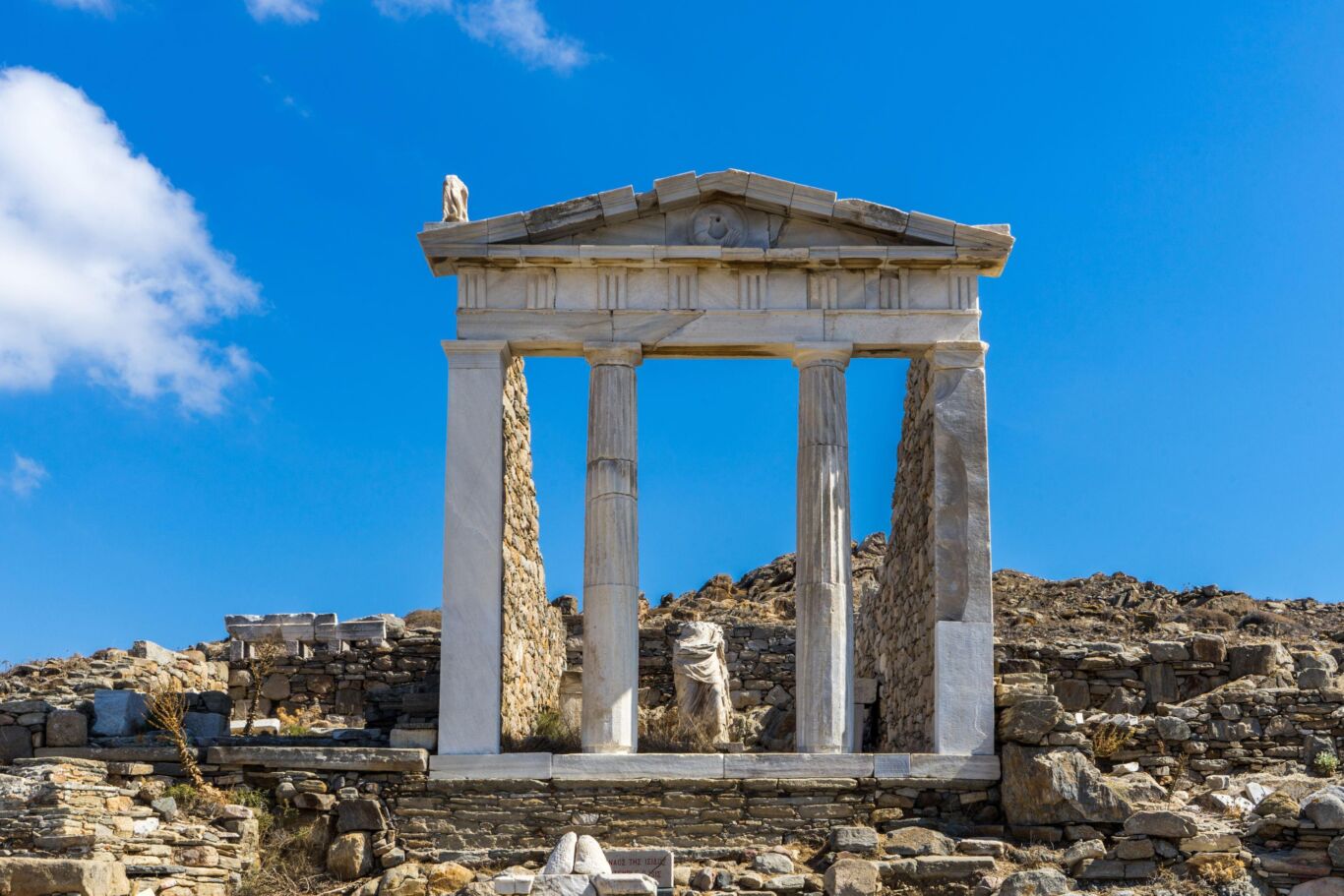 Need to know when travelling to Mykonos

Getting around in Mykonos

In 2019, the Mykonos cruise port handled 550 ship calls with an estimated 700,000 passengers. The cruise ship terminal is located at Tourlos, close by to Agios Stefanos beach, which is about a 30-minute walk away from the town. Shuttles buses are available to take you to the town centre, of you can catch a taxi from the taxi square on the Mykonos waterfront. The cruise port dock at Tourlos serves only small cruise ships, so larger vessels must anchor in the bay and passengers are tendered ashore. The port tender dock is in the old harbour, in walking distance from the town centre.

When to go to Mykonos

The port’s peak cruising season is between May and September. To avoid the crowds and the heftiest prices, go either early or late in the season when the temperatures are still warm. July and August are both much hotter and much busier.

Mykonos uses the euro. You will find several banks and exchange offices on the island, but it’s advisable to have some cash when you arrive for taxis, tips and small purchases.

If you hold a British Citizen passport, you don't need a visa to enter Greece unless you're planning a stay of longer than three months. 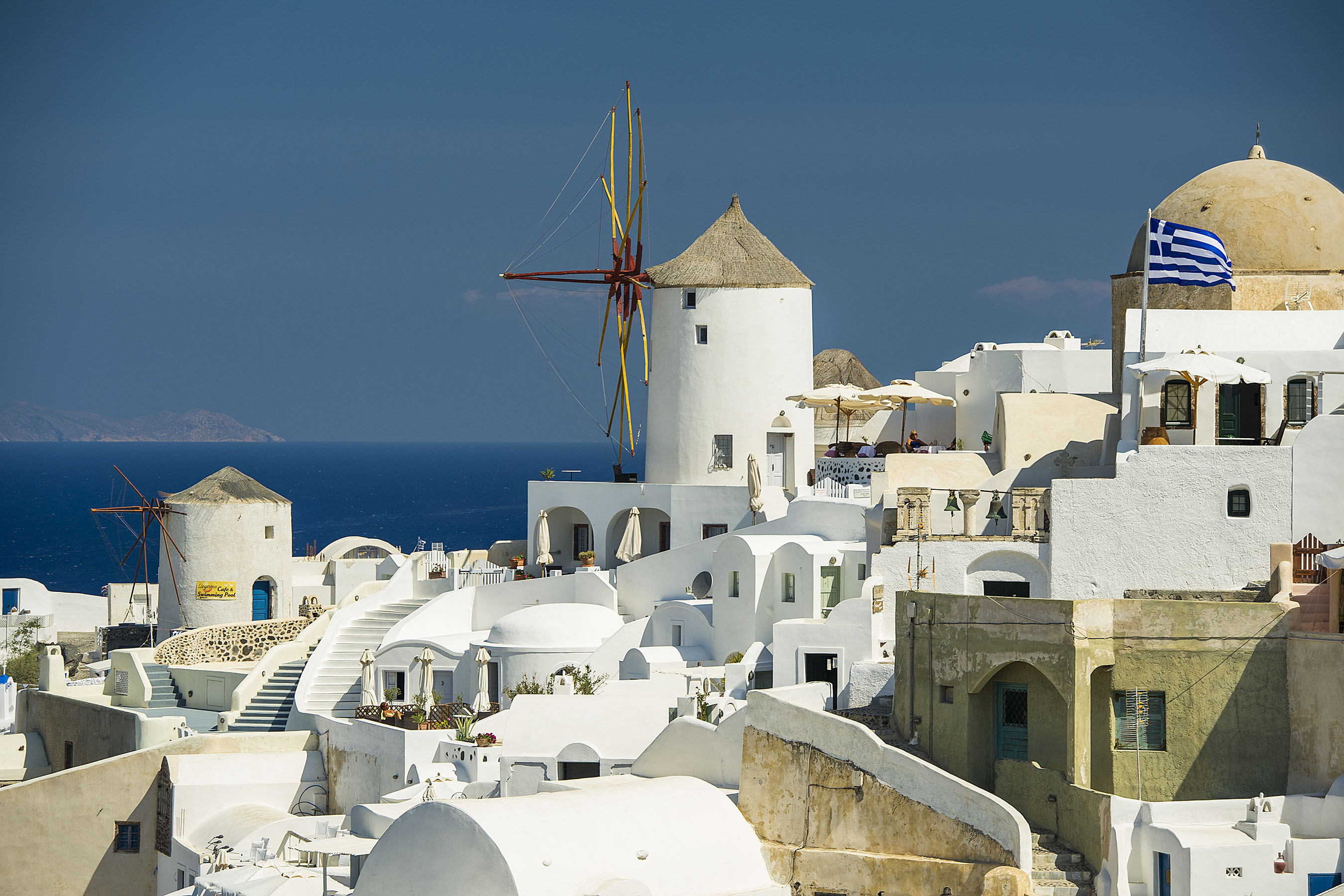 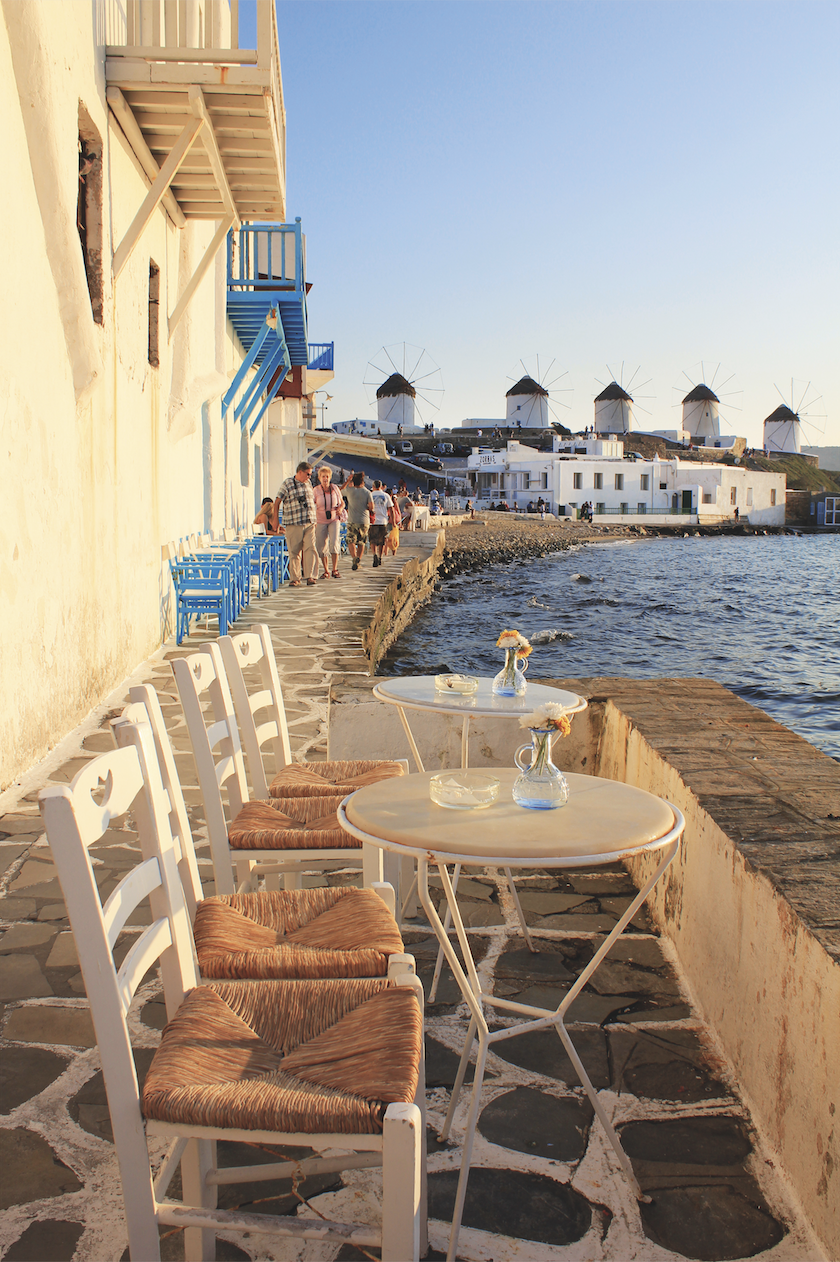 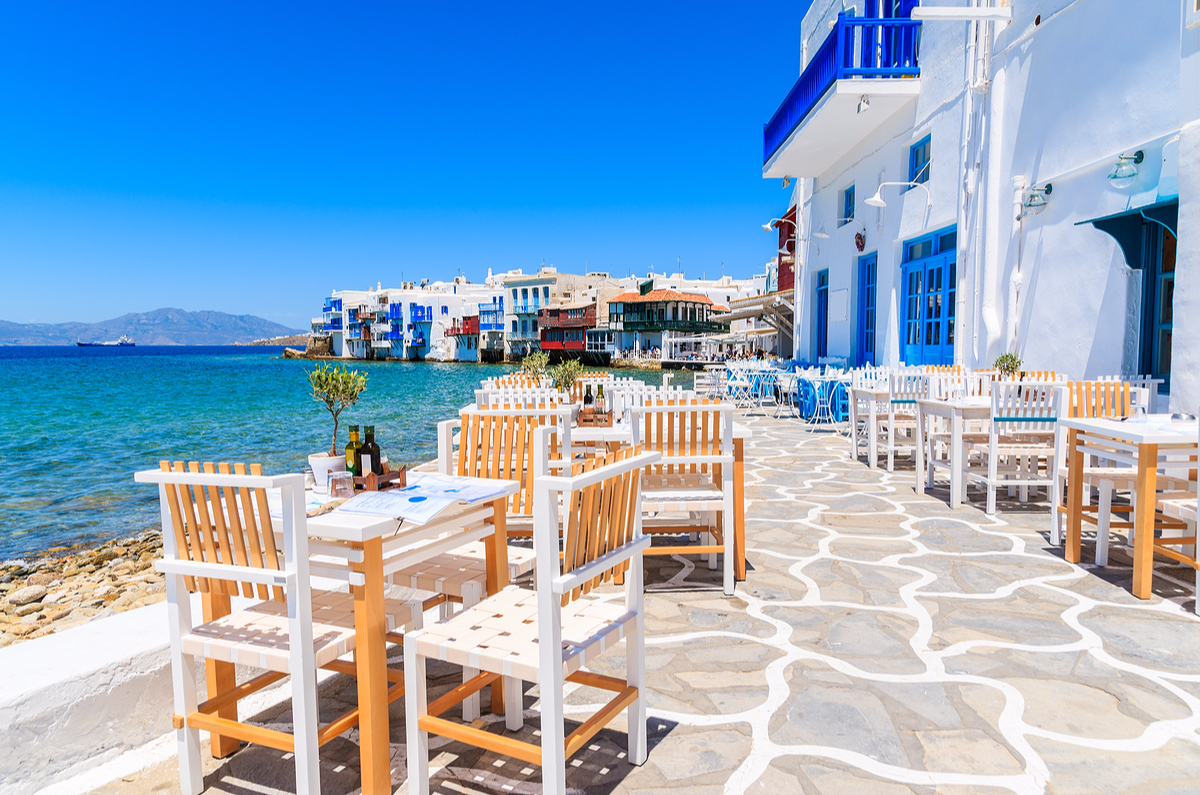 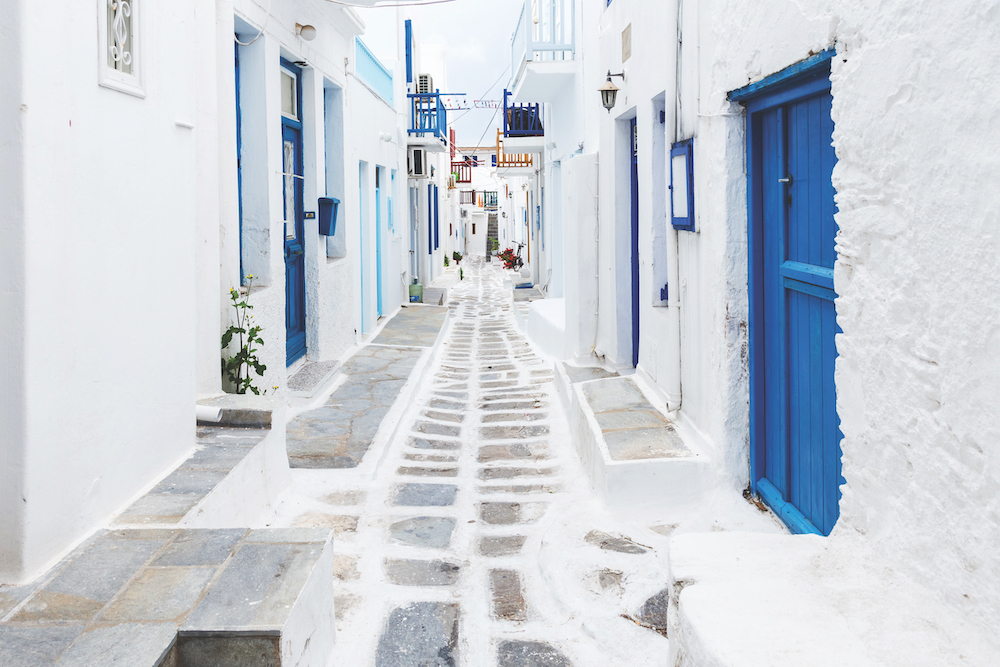 The beautiful streets of Mykonos 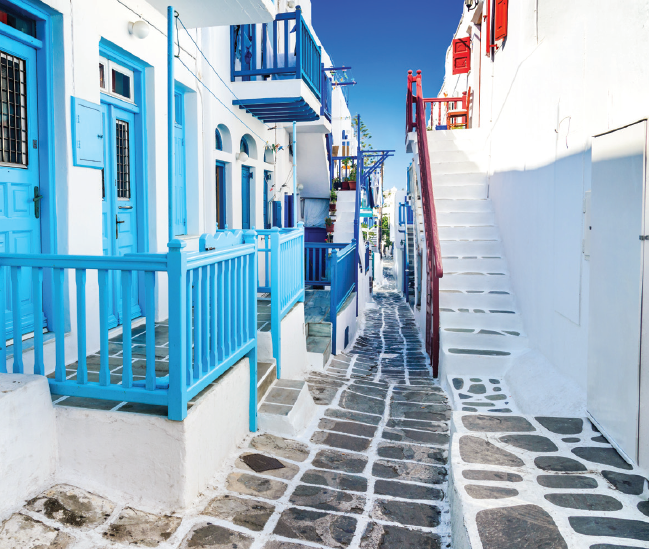 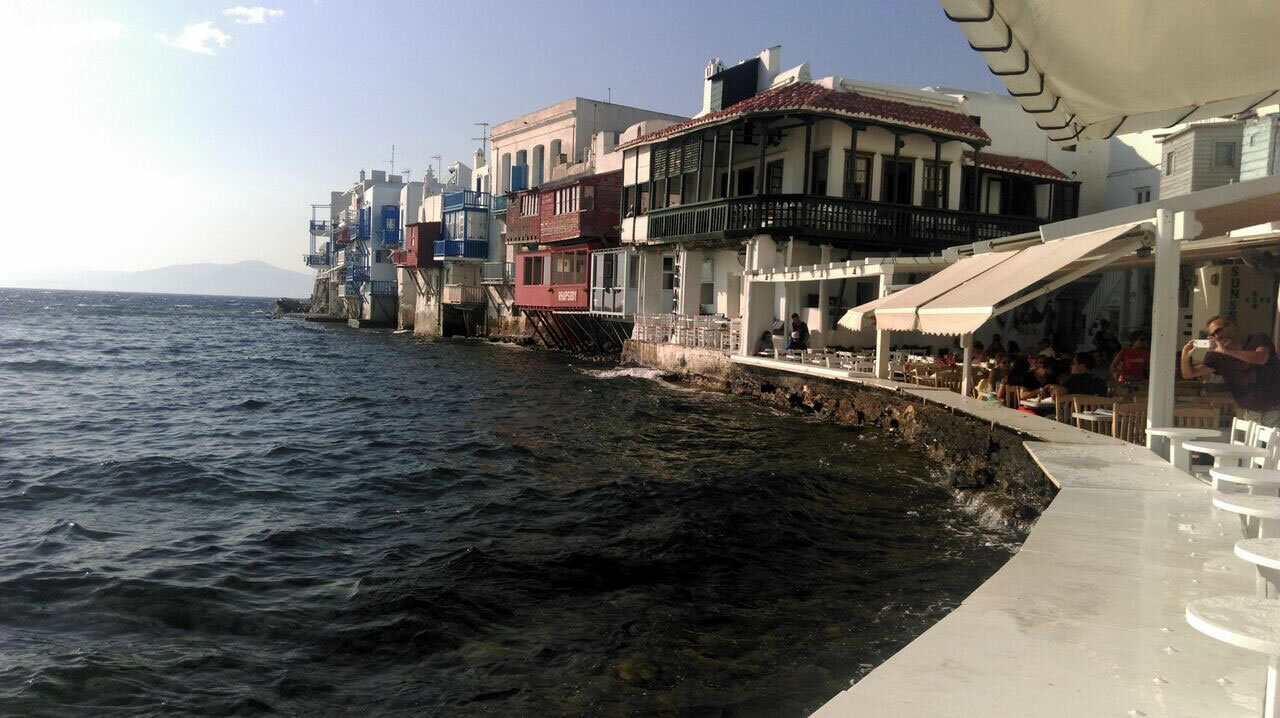 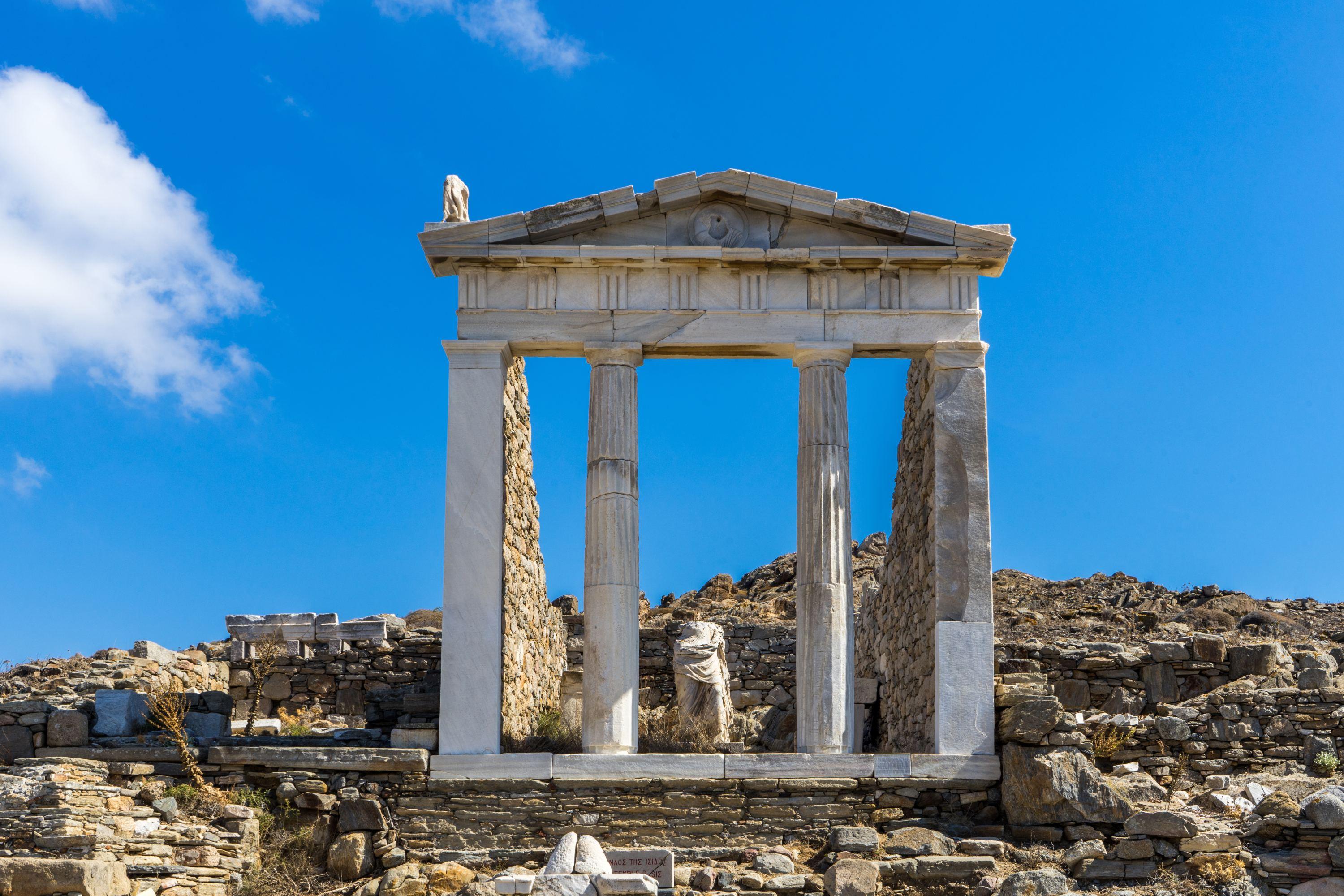 21-Day The Best of the Mediterranean