Cairo is the Arab world’s greatest city, the capital of Egypt and a sprawling cacophony of car horns, calls to prayer and the babble of 10 million voices. This historic city is known in the cruising world as the gateway to the fabled River Nile and is the start and end of many Nile river cruises. While the city itself pulsates with the its colourful Khan el-Khalili bazaar, Mosque of Muhammed Ali, modern Cairo Tower (with viewing platform), and trendy street art and culinary scene, tourists drive outside the city for the peace and grandeur of the last remaining wonder of the ancient world – the Giza Necropolis. You’ll soon see why Egyptians call their capital ‘Mother of the World’.

Cairo is one of the world’s most exciting cities. For one it’s home to the only remaining wonder of the ancient world – the Great Pyramid of Giza and its surrounding historical site – two it’s a lively and cosmopolitan city and three it’s the gateway to the Nile. Cairo is the start or end of many Nile cruises, such as Riviera Travel, which runs cruises between Cairo and Luxor or Aswan. Viking Cruises also kicks off its Nile cruises with a pre-cruise stay in Cairo and the city is also the base for Emerald Waterways sailings.

What to see and do in Cairo

The Giza Necropolis sits on the outskirts of Cairo like a mirage in the sands, guarding the entrance to the sweeping dunes (and the Egyptian afterlife). The complex is made up of the Sphinx and pyramids, including the Great Pyramid of Giza – the last remaining wonder of the ancient world. The complex includes the Great Pyramid of Giza, the Pyramid of Kharfe, the Pyramid of Menkaure and the Great Sphinx of Giza, serving as a burial ground for Egyptian royals 5,000 years ago and now an open-air museum. You can also see the Khufu ship (an ancient vessel used to transport to the afterlife found buried nearby), camels and a nightly sound and light show. 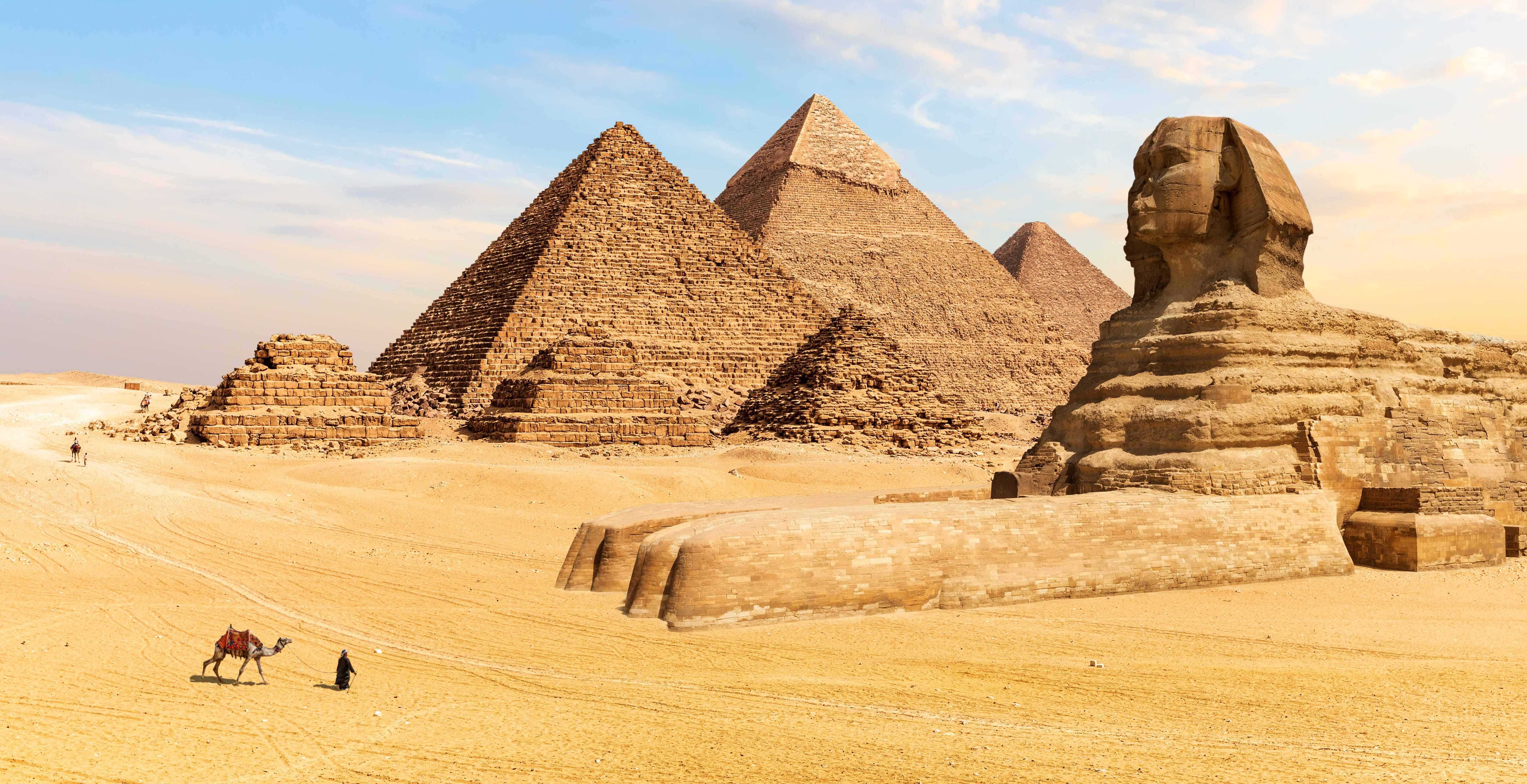 The Khan el-Khalili is the most famous bazaar and souk in Cairo, located in the historic centre of the city. Stepping inside the bazaar is like stepping into a genie’s lamp, where gold-tinged lanes are lined with colourful stalls with glistening stacked treasures linked by grand arched gates. The bazaar is one of the city’s most popular tourist attractions where you can pick up souvenirs, antiques, jewellery and traditional crafts made by Egyptian artisans. Come prepared to get lost in a maze of streets dating back to the 14th-century and to seriously haggle. 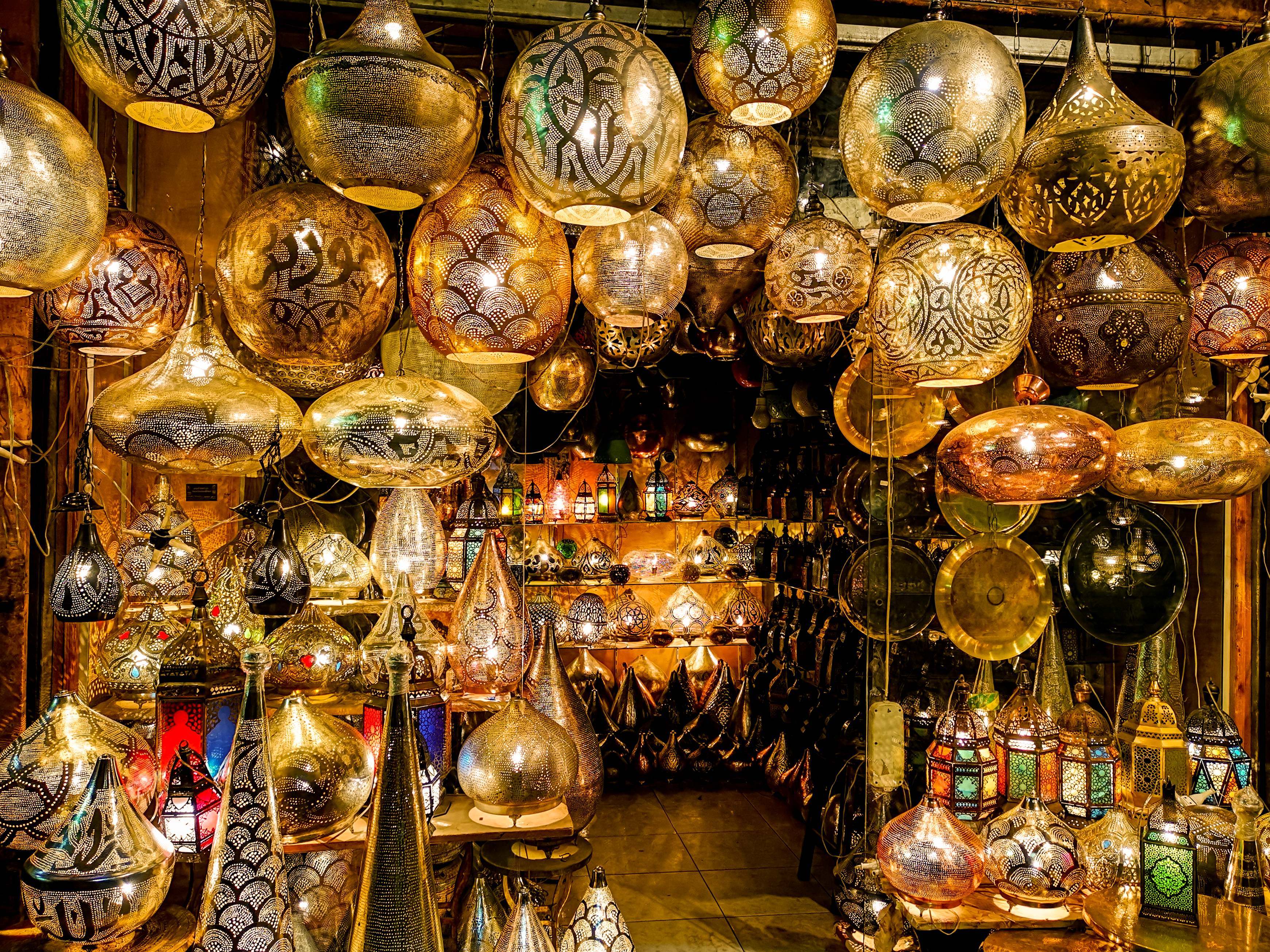 For a taste of modern Cairo, a city pulsating from the life of 10 million inhabitants, head to the Cairo Festival City Mall, a stylish and modern retail, residential and leisure complex. The mall is Cairo’s biggest shopping, dining and entertainment hub, with 300 shops, 95 restaurants and cafés, and huge international giants like IKEA, Carrefour, Marks & Spencer and Debenhams. Inside you’ll find a cinema and swish shopping experience, but head outdoors for the trendy village area. Here you’ll find has 50 cafés and restaurants set around a lovely ‘dancing fountain’ and open-air theatre.

Until the New Egyptian Museum opens in 2021, the Egyptian Museum of Antiquities is the most important museum of Ancient Egypt in the city. Located in the centre of Cairo, it houses an astronomical collection of 160,000 pieces of Egyptian history, spread across 42 rooms and dedicated to Egypt’s most prosperous dynasties. From the pharaonic times, marvel at items from the tombs of the Pharaohs Thutmose III, Thutmose IV, Amenhotep II, Hatshepsut, and the courtier Maiherpri, as well as exhibits from the Valley of the Kings and tomb of Tutankhamun. Greek, Roman, and Islamic history is also explored. Come 2021 and 5,000 articles will be relocated to the new museum.

The Al-Azhar Park is an oasis of tranquilly in what is a pretty chaotic and hot city, an urban oasis of 30 hectares of greenery on what was formerly dust and rubble. The public park is listed as one of the world's 60 great public spaces by the Project for Public Spaces and is inspired by historic lush Islamic gardens. In the park you can see a small lake, pavilions, beautiful plantations and landscaped gardens, terraced gardens, fountains and Mamluk stonework. There are also children’s’ play areas and a few restaurants, perfect for grabbing a drink and relaxing after a crazy day exploring the city. 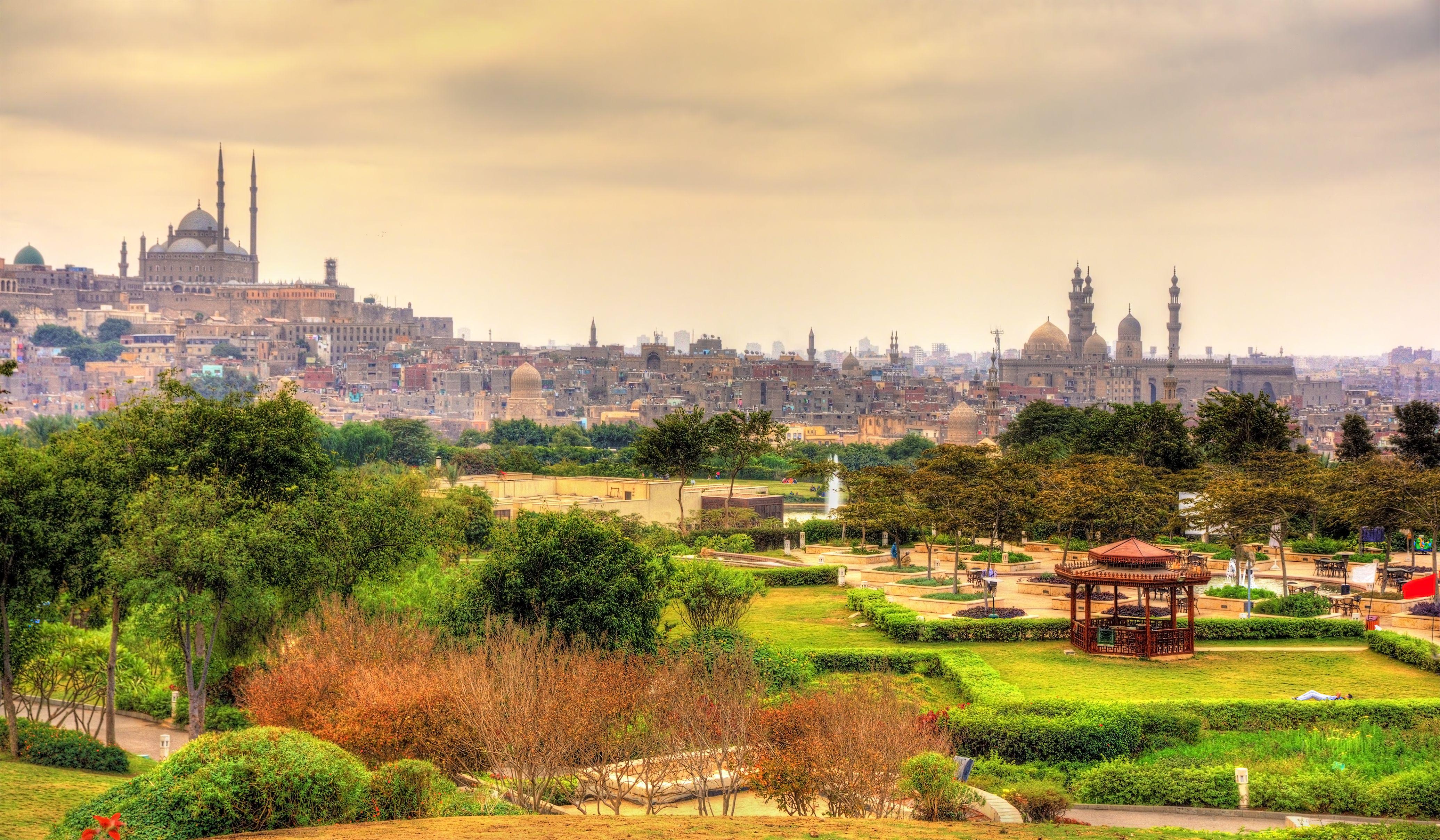 For a breathtaking view of the sprawling city of Cairo, there’s no better place to head than the Cairo Tower – the tallest structure in Egypt and the whole of North Africa. Known to locals as ‘Nasser's Pineapple’, the tower is located in downtown Cairo and resembles a stylised lotus plant with latticed casing. The tower’s viewing platform gives 360-degree views of the city and on clear days you can even spot the pyramids. A café is on hand for refreshments and the 360 Revolving Restaurant is one of the fanciest places to dine in the city. 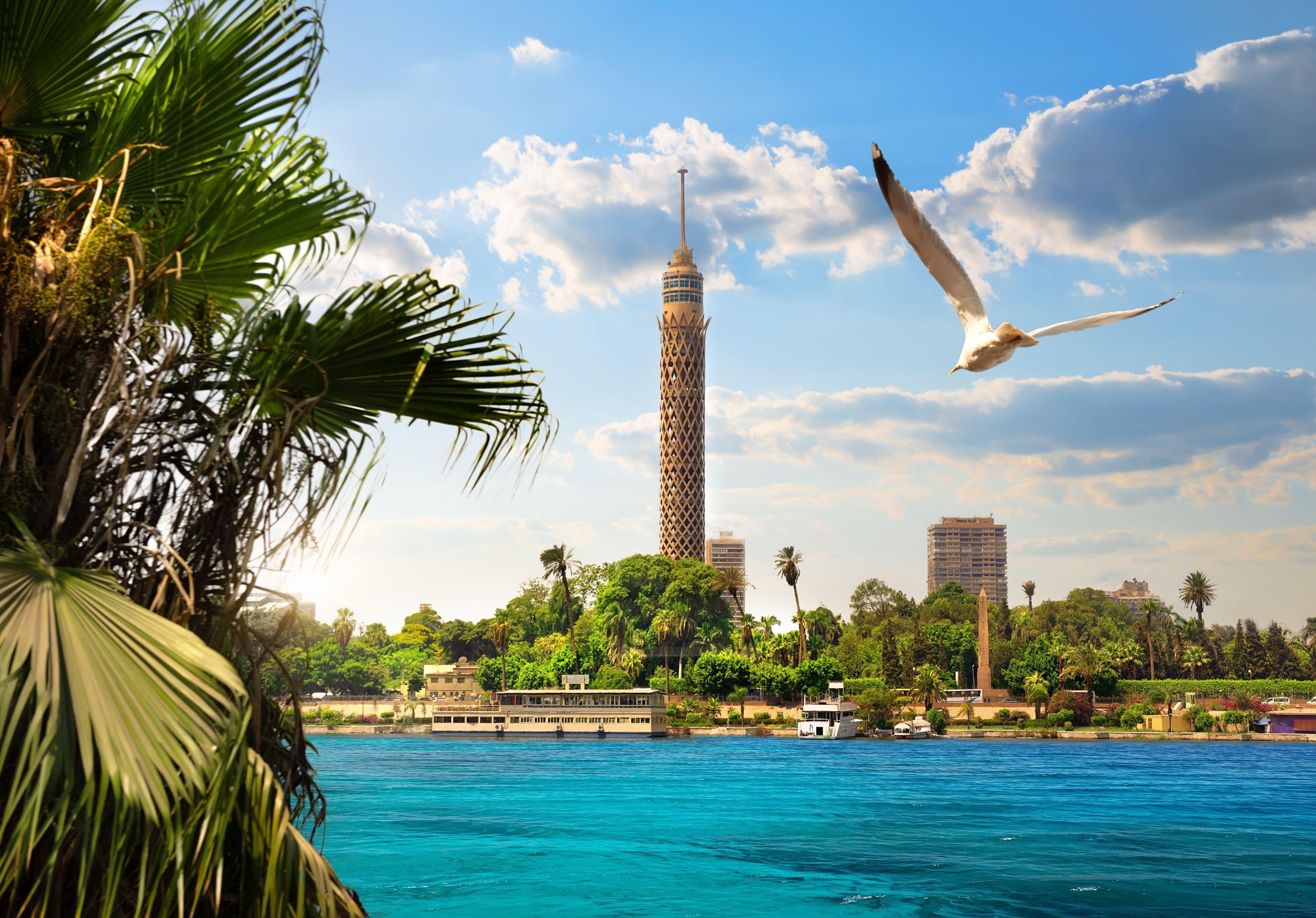 Need to know when travelling to Cairo

Getting around in Cairo

Despite being near the banks of the Nile, river cruises don’t usually take off from Cairo itself, with passengers usually getting a flight from Cairo to Luxor and staying in Cairo as part of a pre-cruise itinerary. A handful of longer Nile cruises do depart from Cairo, like sailings with Riviera Travel. Cruises usually depart from the leafy neighbourhood of Maadi on the Nile Corniche and close to the Maadi Yachting Club.

When to go to Cairo

The best time to visit Cairo is from March to April and October to November, where there are fewer crowds and temperatures are more bearable. Despite the Nile Valley being balmy throughout the winter months, Cairo can get overcast and chilly – especially at night. With that being said, the Cairo International Film Festival takes place in November, a glamorous affair and the only internationally accredited cultural feature film festival in the Arab world.

British passport holders will usually need a visa to travel to Egypt, which can be obtained by the nearest Egyptian consulate or the official Visa2Egypt portal. Tourist visas granted using the e-visa system are valid for a maximum of three months. You can also get a visa at the airport on arrival at kiosks within the airport arrival hall, before immigration, for a cost of $25. 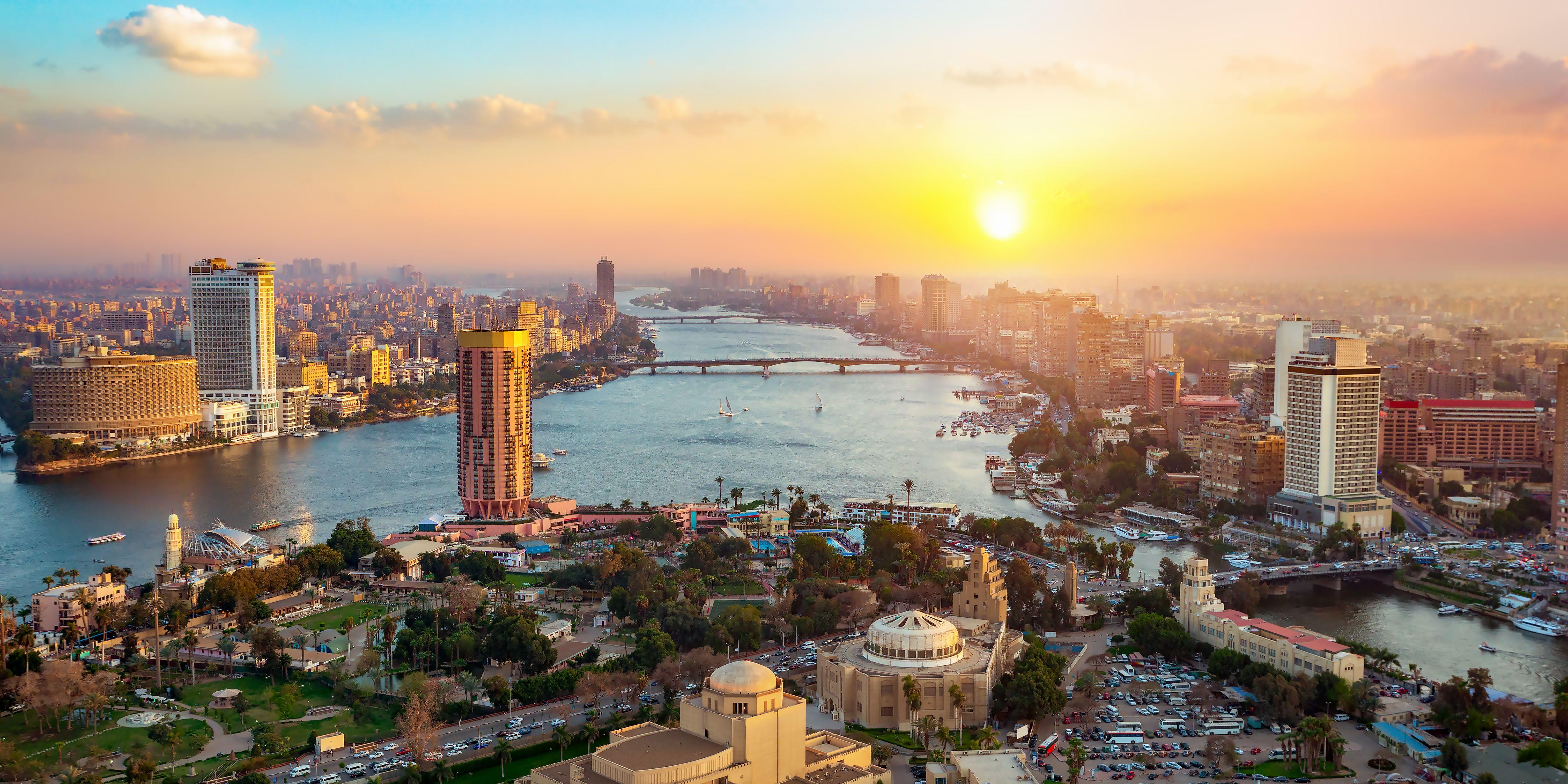 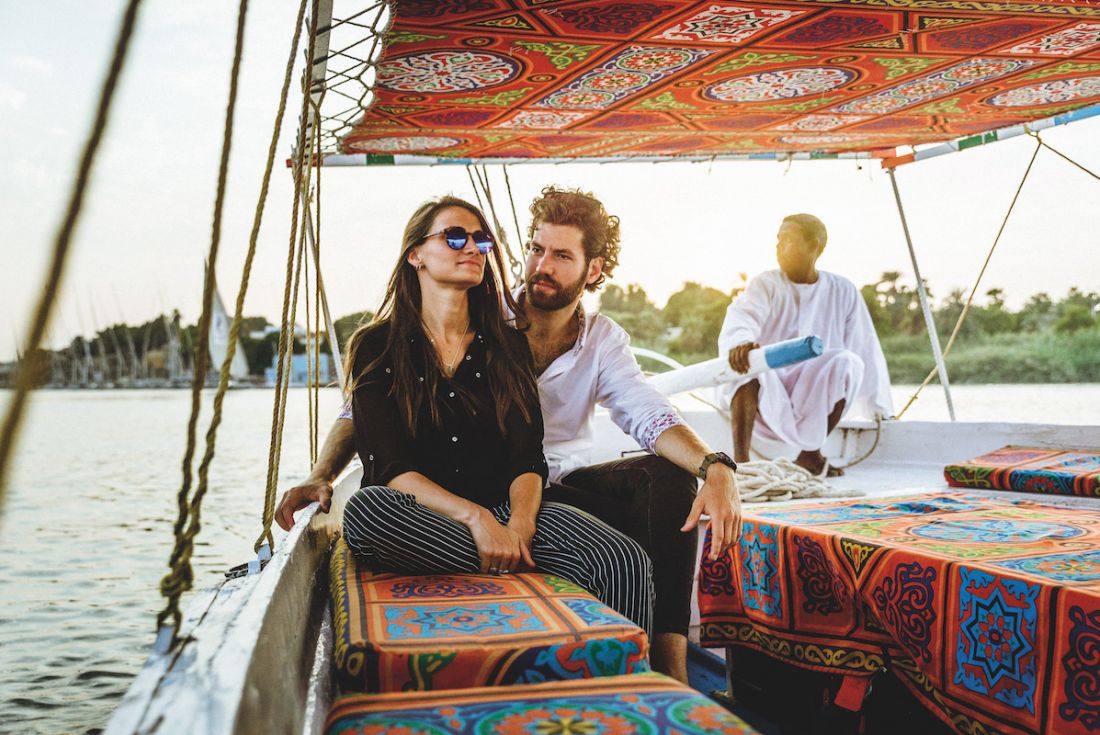 Sail Like An Egyptian: Sailing On A Nile River Cruise