He stayed statue-still for what seemed like an eternity. Then, ever so slowly, he bent his knees and launched himself into the crystal water.

In the shade of the boat’s makeshift canopy of sacks and corrugated iron, the spear fisherman’s wife and young son watched in silence.

But when he broke the surface he had nothing for them.

After a quick exchange of words, he pulled his lithe body back into the simple boat, known as a kabang, which doubled as the family home, and repeated the ritual until, at last, he had caught dinner.

This was just one of the extraordinary sights I witnessed on Pandaw’s Andaman Explorer during a week’s sailing in the Mergui Archipelago.

Although explored by the British in the 1820s, this scattering of islands off the southern tip of Myanmar was considered too remote for trading, and thereby escaped the attention of humankind.

Even now, only 11 of the 900 islands are inhabited, and each day we dropped anchor in deserted bays, lapped by the warm, iridescent emerald sea.

Here we were truly off the grid: no Wi-Fi, no houses, no shops or roads. 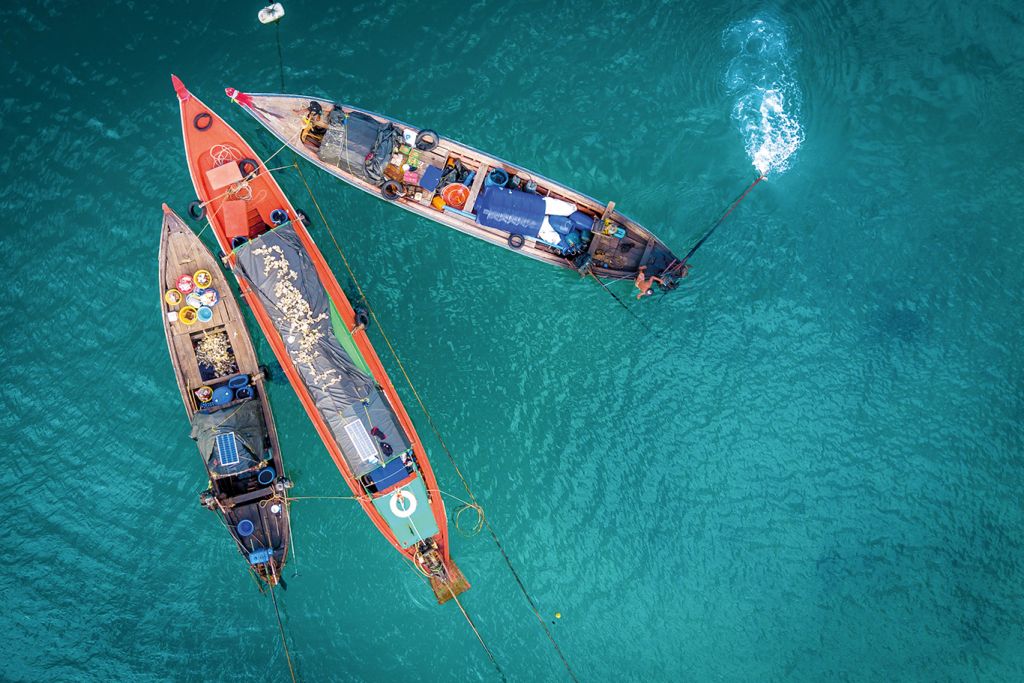 The real beauty, though, was beneath the water. Snorkelling here is akin to diving into an aquarium, with each tropical reef offering a unique collection of coral, anemones and rainbow-coloured fish.

Such an abundance of sealife has sustained the Moken sea gypsies over the centuries.

They live on their kabangs during summer, taking to the jungle in the rainy season. Some have settled, and a few of the islands house small Moken communities of a few hundred people.

But life still revolves around the sea, and at night we sat on Andaman Explorer’s teak deck, mesmerised by the blaze of lights from dozens of squid boats on the horizon, their catch being sold to traders from Thailand, as well as providing food for the village.

ALL ABOARD THE ANDAMAN EXPLORER

We may have been sharing the same waters but our sailing experience was a world away from the simple lives of the fishermen.

Twenty of us were looked after by 16 crew, including a brilliant chef who served everything from fresh lobster to the tastiest curries.

Just 61 metres long, this former coastguard vessel is a beauty, with a classic wood-panelled interior plus gleaming marble floors (courtesy of a previous Italian owner), a lounge with leather chesterfields, and local artwork on the walls.

The accommodation is generous, the two top-deck suites including separate sitting rooms.

There is also plenty of deck space, and we often felt as though we were on our own private yacht. 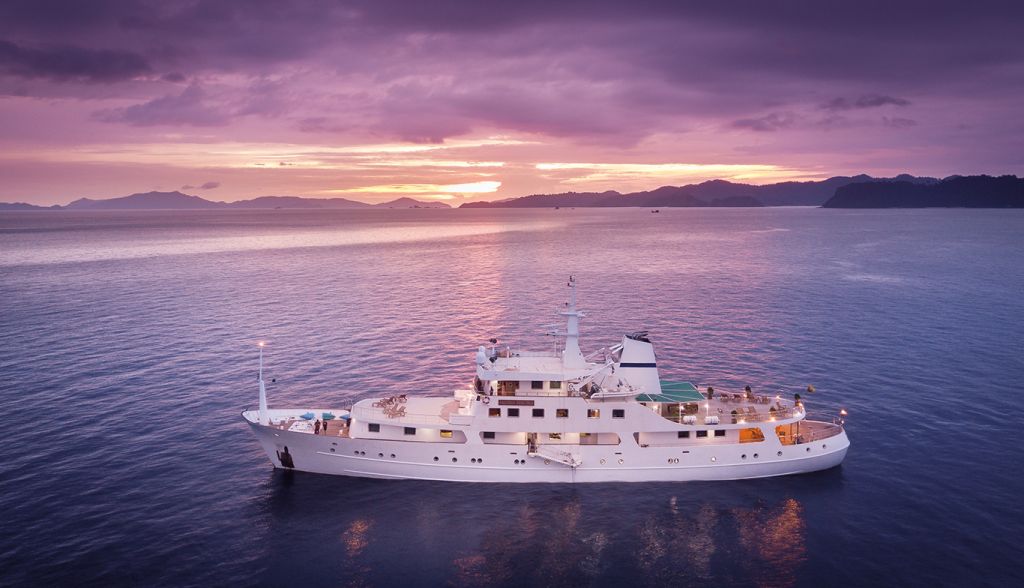 Service was friendly but not fussy, and the company of like-minded travellers – a cosmopolitan bunch from Australia, New Zealand and Poland – made it a pleasure to meet over pre (and post) dinner cocktails and share stories of our adventures.

Days were spent kayaking in Lampi Marine National Park, where we watched white, green and blue-collared kingfishers dart between the giant mangrove roots and at sunset saw giant hornbills fly home to roost.

At Emerald Heart Island – known as Cocks Comb – we paddled inside a circle of sheer cliffs to find a turquoise lagoon, where rays and a black-tipped shark swam alongside us.

Our guides collected oysters from the jagged rocks and, after more snorkelling, our party sat in the tender boats, feasting on fresh seafood.

There were sunset walks along Say Tan Island’s long beach, and on Kyun Pilar Island we picnicked on the edge of the jungle, using the trees for shade, before snorkelling in 28C waters and watching in awe as green flying fish put on a show.

When we dropped anchor at Jar Lann Island, which is dominated by a huge monastery and a golden Buddha overlooking the sea, we thought it was regatta day as a small flotilla of wooden canoes raced out to meet us.

As they came nearer, we saw children – five in a boat, aged from three to 11 – standing as they rowed and grinning broadly.

With only 4,000 tourists entering the 15,000 square mile archipelago each year, foreigners are still a rarity here, and they had come just to see us.

On Salet Galet Island, more youngsters splashed about in the shallows as the village chief welcomed us ashore.

Here the people have very little, living in ramshackle wooden homes on low stilts with roofs made from dried leaves.

While the men were out fishing, the women cooked and washed clothes – all at a slow pace in the 35C heat.

At noon, we watched as a young boy walked along the street, chanting and hitting a bell, and the women all rushed to fill an elderly Buddhist monk’s rice bowl.

A dozen dogs followed, hoping for spills, while children, their faces daubed with thanaka paste as a sunscreen, danced to music blaring from a shack that was the local bar-cum-shop on the waterside.

Later we stopped there for a beer, sitting with some of the fisherman who were taking a break from their labours. 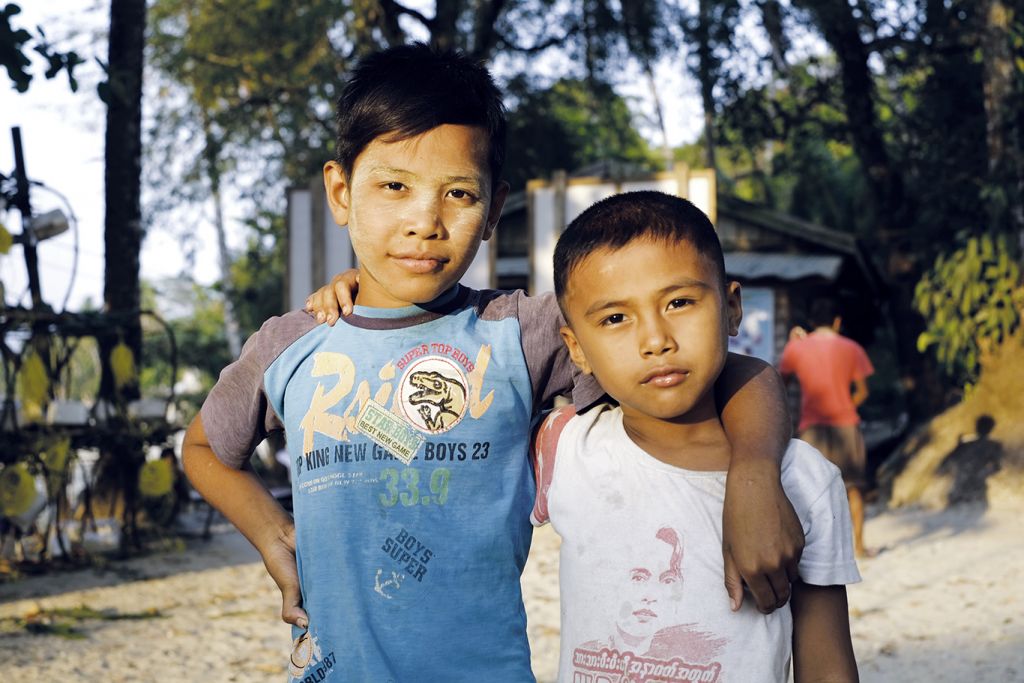 As in all of the three Moken communities we visited, the air was filled with the sound of children’s laughter.

We witnessed no tantrums, tears or sulks as they amused themselves with simple games.

The only sadness was ours, seeing barefoot youngsters pick their way over broken glass and plastic that had washed up on the shores.

Witnessing first-world rubbish reaching these pristine shores was the low moment of the cruise.

The crew of Andaman Explorer, mainly from Myanmar, did their bit, clearing up what they could as we sailed into each island, but addressing this problem will take far more than one small ship’s willing crew.

The Myanmar government has agreed to issue 14 licences to create eco-resorts in the region, and, after visiting Boulder Bay, we could see this might be a blessing.

Here, at the western end of the archipelago, a few bungalows have been built from wood and dried leaves, the reef has been protected, plastics banned and only bio-degradable soaps and detergent used.

Solar power has been installed and visitors are expected to help care for the island.

There was not a bottle to be seen and the coral reef was both pristine and teeming with life (we saw clams, conch and cuttlefish in abundance).

No one is saying that eco-tourism alone can solve the planet’s plastic pollution problem.

But we have to start somewhere – and initiatives like this at least help to stem the tide of rubbish that threatens one of the last tropical paradises on earth.