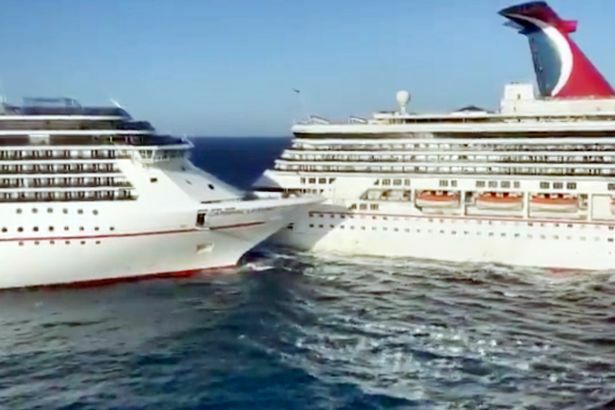 Carnival Cruise Line Ship Collides with Another During Mexico Cruise

The two ships collided in Cozumel, Mexico, when Carnival Glory pulled into port next to Carnival Legend…

Carnival Cruise Line saw two of its cruise ships collide on Friday 20 December, when Carnival Glory got a little too close to Carnival Legend while docking in port.

The collision happened on the Mexican island of Cozumel, a popular stop on cruise itineraries.

Carnival Glory was coming into port when she “made contact” with Carnival Legend, according to the cruise line corporation. Six guests are reported to have been injured during the collision.

In an emailed statement, a spokesperson for Carnival Cruise Line said: “Carnival Glory was maneuvering to dock when it made contact with Carnival Legend which was already alongside.

“We are assessing the damage but there are no issues that impact the seaworthiness of either ship.”

An onlooker, Ty Harris, managed to catch the moment of the collision on film. Posting the footage to Twitter he wrote: “We caught the crash of the two ships on film. Carnival glory and carnival legend* [sic].”

#cruise #crash #carnival @CarnivalCruise we caught the crash of the two ships on film 🥴. Carnival glory and carnival legend* pic.twitter.com/4jvsCD72aL

The footage shows Glory‘s floor pushed downwards, with railings and windows smashing and buckling as Legend‘s bow ploughs into her. Other images show one corner of Glory’s stern smashed in and the balconies hanging loose.

Shortly after posting the footage, Carnival replied to the tweet: “There is one reported minor injury of a Carnival Glory guest that occurred when a group of guests were evacuated from the dining room on Decks 3 and 4.”

Another passenger, Jordan Moseley was eating breakfast on the Carnival Legend when he felt the crash.

Speaking to Reuters, he said: “All of a sudden we felt the ship rock to one side and then back into place.

“A few minutes later, the cruise director announced that the Carnival Glory had crashed into our ship while docking due to the high winds and rough ocean conditions in Cozumel.”

Both ships are similar in size, with 2,980-passenger Glory 952ft long and 2,124-passenger Legend 963ft, according to the Carnival website.

Both ships are said to still be in sailing condition…