Top 10 Cruises to the World’s Most Inspiring Gardens

From Monet’s garden in Giverny to Marie-Antoinette’s enchanting English garden in Versailles, discover the grounds that have captured the imagination of so many

Tulips have been considered the national flower of the Netherlands since the 16th century, when they were first imported from Turkey. The world’s largest flower garden, Amsterdam’s 80-acre Keukenhof Gardens features more than seven million varieties of tulips and flowers, making it a must for horticulturalists and botany amateurs alike. Celebrity Cruises’ northern Europe tour next year takes place during the annual tulip festival.
10-night Northern Europe Capital Cities cruise aboard Celebrity Apex, departing 13 April 2020, from £2,349 in an Oceanview Stateroom based on two people sharing, celebritycruises.co.uk 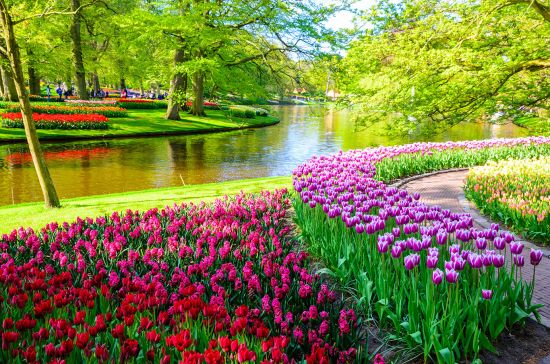 The village of Giverny with its beautiful landscape was the inspiration for Claude Monet’s most famous works. Uniworld’s luxury river cruise on the Seine aboard SS Joie de Vivre allows guests the chance to visit the home and gardens of the Impressionist master and see his paintings come to life, from The Water Lily Pond to Pathway in Monet Gardens at Giverny. On day six, guests will also visit the Palace of Versailles, where they can bike ride through Louis XV’s botanical grounds and visit Marie-Antoinette’s English Gardens.
Eight-day Paris & Normandy cruise, departing 18 August 2019, from £3,799pp, uniworld.com 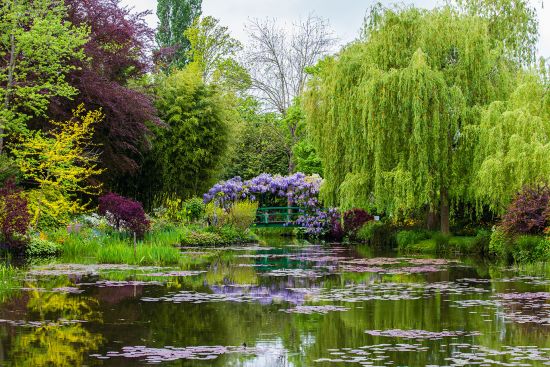 Elton John, Margaret Thatcher and Princess Diana are just some of the iconic and influential world figures to have been honoured at the famed orchid garden, named after one of the beautiful blooms. The 160-year old garden is lauded for having the world’s largest orchid display, with more than 1,000 species and 2,000 hybrids of orchids and is one of just three to have been recognised as a UNESCO World Heritage Site.
17-day Queensland cruise, roundtrip from Sydney calling at Brisbane, Airlie Beach, Yorkies Knob (Cairns), Port Douglas and Willis Island, departs 27 November 2019, from £849pp (based on two guests sharing an inside stateroom), princess.com 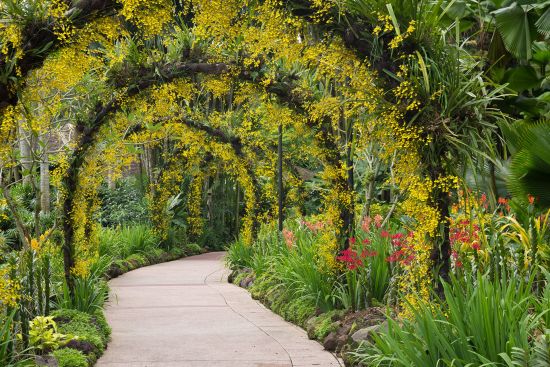 If Jennie Butchart had been alive today, we are almost sure that she would have won a prize at the RHS Chelsea Flower Show. Having established her home in the grounds of what is now Butchart Gardens, the avid horticulturist set about transforming the gardens into an outdoor work of art. The fruits of her labour are seen today by more than a million people each year. Guests can stroll through the English Rose Garden, the Japanese Gardens and the iconic Sunken Gardens, before enjoying afternoon tea – a tradition that has been going on by visitors for more than a century.
A 10-night Alaskan Grandeur voyage round trip from Vancouver calling at Haines, Juneau, Hoonah, Sitka, Ketchikan and Victoria, from 10 August 2019 aboard Crystal Symphony, from £2,653pp, crystalcruises.co.uk 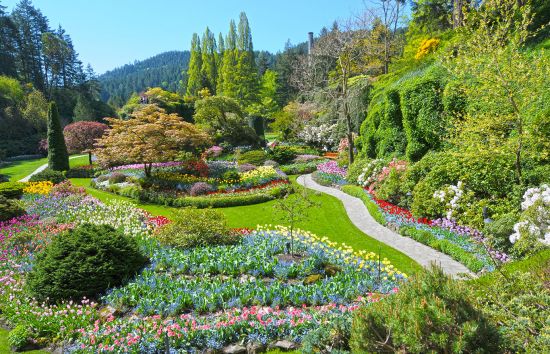 Viking Cruises has a long association with horticulture, having sponsored its garden the RHS Chelsea Show for the past seven years and last year won gold. The cruise’s lines historic Elegant Elbe cruise visits Sanssouci Palace, featuring a terraced garden which became a sanctuary for Frederick the Great, King of Prussia. Another highlight is a trip to Wörlitz, created in the 18th-century by Prince Leopold III. The garden is divided into six sections, each reflecting the landscapes the he visited during his Grand Tour of Europe. Posturing peacocks, manicured lawns and a tree-lined stream make this a nature lover’s dream and will no doubt leave you enlightened as it it did the royal prince.
10-day Elegant Elbe cruise, from £2,895, vikingcruises.com 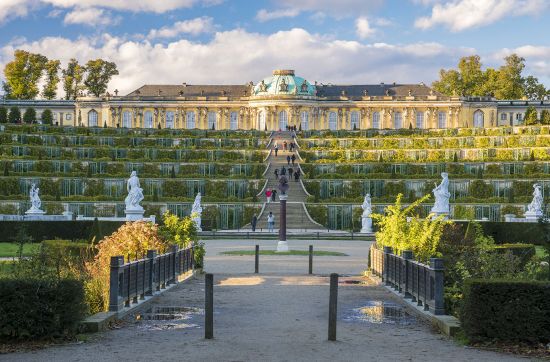 The plants within Gibraltar’s Alameda Gardens tell a story of the city’s colonial past, featuring many plants from former British territories including Australia and South Africa, as well as native species. The gardens, opened in 1816 as a place of recreation for soldiers stationed at the fortress, have become a symbol of pride for the city of Gibraltar. Out of the fauna and flora on display, one of the most historic is the 300-year-old subtropical dragon tree, native to the Canary Islands.
Mediterranean 14-nights, departing 19 August 2019 aboard Arcadia, from £1,449pp, pocruises.com 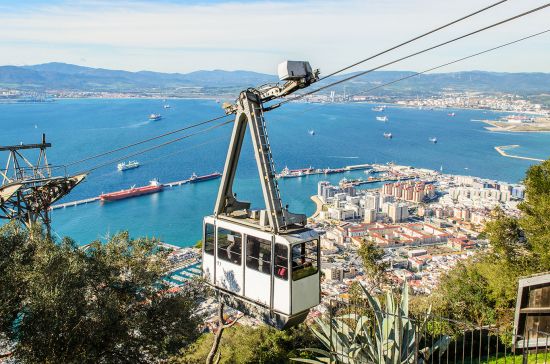 Tromsø’s Arctic-Alpine Botanic Garden is open all-year round, but the best time to go is between May and July, when the midnight sun is continuously set above the Tromsø horizon and brings life to the native perennials and herbs of northern Norway. One of the most beautiful is Meconopsis, a captivating steely-blue poppy. Flowering once before dying, its short presence makes its sighting even more special.
14-Day Majestic Fjords & North Cape cruise on Seabourn Ovation sails between Copenhagen to Copenhagen, departing 7 July 2019, from £4,999pp sharing a Veranda suite, seabourn.com 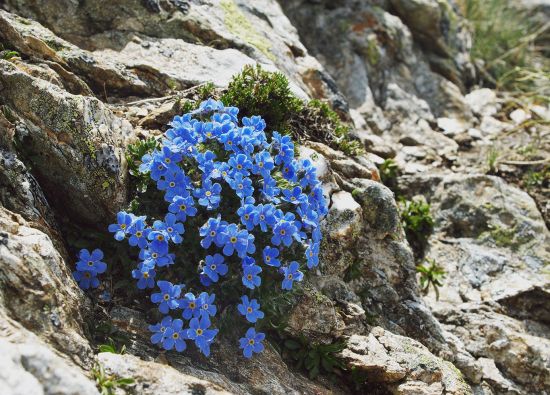 Peterhof has been called “an encyclopaedia of park design”, marking two centuries of European aristocratic history in St. Petersburg. Peter the Great, Empress Elizabeth and Catherine the Great all played a part in its opulent design. The King’s Garden, hailed as the country’s oldest royal garden, boasts large flowerbeds and the iconic statues of Hercules Pavilion and Hans Christian Andersen. Grand and ostentatious, it may not be to everyone’s taste, but it is certainly an impressive sight to behold.
6-night Northern Europe cruise on board MSC Poesia calls at Warnemünde, Stockholm, Helsinki, St Petersburg, Copenhagen, departing 30 June, from £739pp, msccruises.co.uk 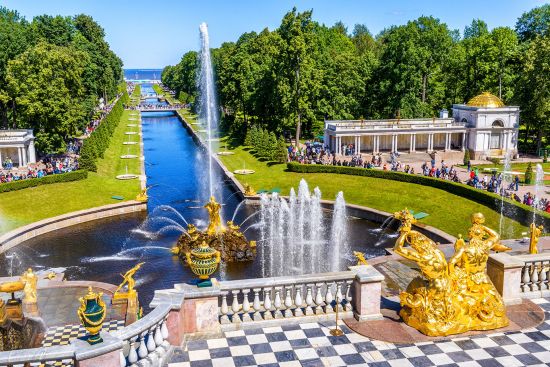 Frequently called the ‘floating garden’, the island of Madeira’s warm climes has meant that its lush vegetation can be enjoyed by visitors all year round. There are 100 indigenous plants exhibited, along with those from tropical and subtropical regions. Saga’s two-week cruise combines Madeira with the tropical Canary Islands, with visits to The Botanical and Orchid Gardens in Tenerife, Palheiro Gardens in Madeira and the Cesar Manrique Foundation in Lanzarote. Passengers on the cruise will be joined by award-winning British garden designer Chris Beardshaw, who will share his expertise and knowledge.
Canary Island Paradise, 14 nights calling at Cadiz, Arecife, Santa Cruz, Las Palmas, Funchal and Lisbon, departs Southampton 7 February 2020, aboard Saga Sapphire, from £2,084pp, saga.co.uk 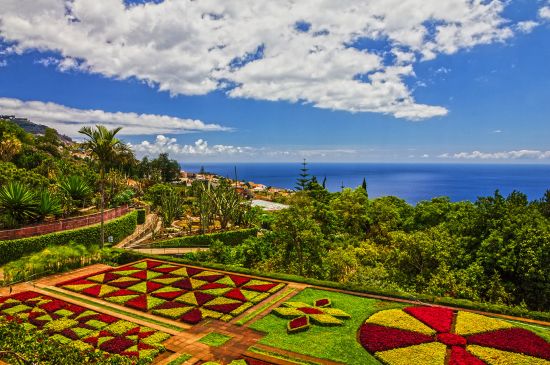 On every horticulturist and flower-enthusiast’s bucket list should be a visit to Japan to see the sakura cherry blossom. Botanica offers one of the best and one of the most comprehensive tours of this spectacular natural phenomenon, which includes a 10-night cruise aboard the MS Caledonian Sky, one night in Tokyo and visits to the world-famous Zen gardens and the strolling gardens of Korakuen.
12-day Cherry Blossom, Culture and Sights of Japan cruise aboard MS Caledonian Sky, from £8,945pp, botanicatours.com